I was monkeying around with the Smith machine and stumbled onto a new glute movement that's particularly effective.

It's based on the traditional good morning "lower back" exercise that's a staple of the powerlifting community. I coined the exercise "glute mornings" but I'm not sure if the name is clever or stupid. Probably the latter, but it doesn't matter much. What's important is that they work.

You begin your setup in the Smith machine the same way as you would for a conventional good morning, but before you do your first rep, you step back as far as you can, holding onto the bar so you don't plant your face. In many ways, it's a lot like a top-loaded kettlebell swing or hip thrust, only it allows you to defy gravity because you're able to hold onto the fixed bar.

Doing so creates a longer lever arm than what you'd experience in a traditional good morning. It also focuses more on the glutes and hamstrings, allowing you to maintain constant tension on them.

How Much Weight and How Many Reps?

A little weight goes a long way on these. I've seen Bri Alexander, the woman in the video, do easy hip thrusts with 365 pounds, but the two tens she's got loaded on the bar is an appropriate weight for her, at least initially.

Besides, using too much weight could cause problems. You want your glutes to do the majority of the work here, and that requires forming a Vulcan mind meld with them. As such, you need to use lighter weight so that your lower back doesn't fight to take charge and defeat the primary purpose of the movement.

Shoot for a higher number of reps, somewhere between 12 and 15 to really get that ham to sizzle. Kick one leg back off the ground and do them one-legged for extra credit.

Stepmills suck. Well, actually, they're great for fat loss and conditioning. They're just hard. Here's how to get results in a 5-minute workout.
Metcon, Tips, Training
Andrew Heffernan July 18 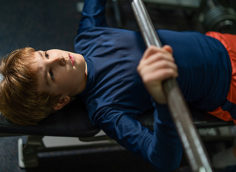 Here's an easy way to get slothful kids to do a little exercise while subtly introducing them to resistance training.
Training, Workouts
TC Luoma July 5 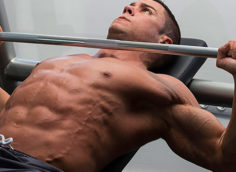 How important is putting your mind in your muscle for hypertrophy and strength work? Let's break it down.
Bodybuilding, Powerlifting & Strength, Tips, Training
Christian Thibaudeau February 14