For those of you unfamiliar with what goes on in a whole-body cryotherapy center, you strip naked except for your underpants, a pair of gloves, and a pair of socks, kind of what you wear to a swinger's party in Oslo.

You then walk into a kind of upended tanning bed, but unlike a tanning bed, your head sticks out of the top of it so you look like some super villain who was fatally injured in an industrial accident and then reanimated when they attached his head to a bulky super computer.

Then some sprite of a girl, usually in her late teens or early twenties, stops texting long enough to clomp the door behind you and turn the temperature knob to minus 200 degrees Fahrenheit, or somewhere thereabouts.

You emerge about three minutes later, well on your way to reduced muscle pain, weight loss, firmer skin, improved sleep, and a heartier immune system, or so the brochures say. Sure, your testicles took receding to a whole new level by catching the next red-eye to Miami, but they'll be back by next Tuesday after they've warmed up a bit.

A just-released study compared the effects of whole body cryotherapy against both cold-water immersion (sitting in ice water) and placebo on athletes who'd done a high-volume, heavy-load workout that resulted in increased soreness, "disturbances of muscle function," and increased inflammation. The authors wrote,

"With the exception of CRP (C-reactive protein) at 24 hours, neither cryotherapy intervention attenuated the inflammatory response compared to placebo."

As far as accelerating recovery, neither of the cold treatments proved to be more effective than placebo.

It really doesn't look like cryotherapy does much to speed up recovery – let alone any of that other aspirational stuff – but even if it did, lifters should look at inflammation, or at least acute inflammation, as their friend and nobody wants to drive away a friend.

Chronic inflammation is bad. It's the response to any injury or infection that sticks around a long time. Acute inflammation, however, is essential to healing. Without it, knife wounds would never close. Paper cuts would bleed forever. Hickeys would last a lifetime. You get the idea.

Acute inflammation is also what leads to muscle growth. When you damage your muscle cells through exercise, non-phagocytic macrophages come surging in like Aquaman and his gilled allies to bathe the injured muscle fiber in the growth hormone IGF-1, which significantly increases the rate of muscle regeneration.

Low-level inflammation also brings about a rise in cyclooxygenase (COX) enzymes, which play a big part in initiating satellite cell proliferation, differentiation, and fusion. (Satellite cells are dormant cells that spring to life after injury to form new muscle cells.)

Clearly, you need acute inflammation in order to make muscles grow, and whole body cryotherapy, even if it works a little, would work contrary to your goal. (The same is true of NSAIDS – non-steroidal anti-inflammatory drugs.)

It is true, however, that cryotherapy or NSAIDS could make aches and pains go away a bit faster, but this seems like a strategy more suited to people who play some sport where they're required to perform at a high level day in and day out – not weight lifters who need to come back bigger and better each time they train.

If you're really uncomfortable after a workout and you want some relief, go ahead and try a session at a cryotherapy center, but if freezing yourself seems like too damn much trouble, you could probably get away with using some acetaminophen, which is more of an analgesic than an anti-inflammatory.

Curcumin would be a better choice, though, as it blocks a host of inflammatory responses by a reasonable percentage rather than stopping any one particular response by 100 percent.

What causes this common issue? How can you fix it? Answers here.
Tips, Training
Eirik Sandvik October 25 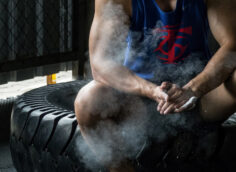 Tired of busy gyms? Sick of not knowing if your gym will be shut down by the government? Get some home gym equipment. Try this cool gear.
Bodybuilding, Powerlifting & Strength
T Nation January 13

If you have long arms, it's tougher to build biceps and triceps. Use these exercises to bring them up.
Arms, Bodybuilding, Tips, Training
Eric Bach August 16