Charles Poliquin used to have a term for guys who bench-pressed with their legs off the floor and their knees bent at a 45-degree angle. He called them "future orthopedic patients."

He thought that benching that way was plain stupid and totally useless, unless maybe Ludmilla, the one-eyed Russian former Olympic shotputter who works in custodial services at the gym was mopping up around the bench press and you had to lift up your legs because you were afraid of getting a meaty backhand across the face for mucking up her clean floor.

I've always thought it was a stupid way to bench, too, and I can't help but shoot condescending stares at any moron I see doing it.

That's why it was particularly painful to read this new study. It seems, cough, hem, haw, that benching with your feet off the floor actually increases the involvement of the pecs, delts, triceps, and even the muscles in the forearms.

But then I thought about it a bit and decided that their findings, while legitimate, weren't applicable to anyone who wants to add muscle or get stronger.

Spanish scientists recruited 20 young men and carefully established their 1 RMs (the most weight they could lift for one rep). They then wired them up with enough electrodes to make them look like the dudes in a Marvel Comics origin story, just before something went horribly wrong and turned them into super heroes or super villains that spat lighting bolts out of their wazoo.

After thoroughly warming up, the subjects performed 8 reps of bench press with 60% of their 1 RM with either their feet on the ground or their feet elevated. They did a set of 8 reps using a 2:2 tempo (both lowering and raising the bar to a count of 2).

After an appropriate rest period, the participants repeated the lifts, doing the opposite (feet up or feet down) of their first test.

This prompted the authors of the study to write, in Yoda-speak, the following: "To perform the bench press exercise with flexed hips could be recommended for training in sports where the upper limbs and hip flexor muscles are required."

While I don't doubt the findings of this study, I'm still not going to do or recommend the "legs up" bench press. I've got several reasons. For one, the slow tempo they used in the study doesn't reflect how people normally bench and I'm pretty sure that lifting explosively, or at least quickly, would show a different recruitment pattern.

Secondly, their study showed that there's more activation of the rectus femoris in the legs-up bench than there is in the conventional bench. The trouble with that is, the bench, when it's done with any amount of significant weight, is actually a whole-body lift with all kinds of involvement from the legs.

Clearly, these guys were using a weight that was so light that it didn't require any drive from their legs. If they had used a heavier weight, it would surely have shown a higher level of recruitment of the rectus femoris than just lifting up your legs so Ludmilla can mop under your feet.

Third, other studies have shown the opposite – that the conventional bench recruits more muscle than the legs-up version. (Of course, those studies used a BOSU ball underneath the lumbar spine to introduce instability, and the weight of the lifter plus the weight on the bar just might have smushed the ball down so it was, in effect, close to being a flat or semi-flat surface.)

Lastly, recruitment of motor units isn't the end-all and be-all of hypertrophy or strength. What matters more is the mechanical loading the muscle fibers are subjected to.

Look at it this way, if you were to put on a chicken costume, climb atop your house and jump off, you'd recruit a whole lot of pectoralis-muscle fibers as you frantically sought to achieve flight, but all the flapping in the world wouldn't lead to additional strength or size.

What you need is adequate load, but if you attempted legs-up benches with much more than the 60% of 1 RM used in the Spanish study, you'd eventually run into the same problem you do with any type of instability training – having to balance the bar lengthens the amount of time between the eccentric and concentric part of a movement, resulting in a much-impaired stretch-shortening cycle, which impedes strength gains.

Also, the limiting factor in any kind of instability training becomes the strength of the stabilizer muscles involved in the lift. In other words, muscle fiber recruitment of the chest, delts, and triceps ultimately would suffer because the amount of weight you'd need to coax the muscle to grow would likely be more than you could balance and keep from ending up an orthopedic patient.

Since the beginning of time, mankind's argued, debated, and beat each other over the head with sticks, all in an effort to figure out who's right.
Training
Paul Chek September 21 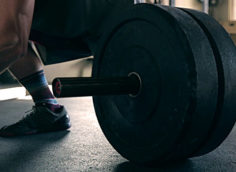 With the tempo-contrast method, different types of contractions recruit more muscle fibers. Do 2 reps slow (5 seconds up, 5 seconds down) then 2 fast reps. Do either 8 or 12 total reps per set.
Bodybuilding, Exercise Coaching, Shoulders, Tips
Christian Thibaudeau May 10

Figure competitors and guys who squat 900 pounds have something in common. They use cable pull-throughs to build great posterior chains. Here's how.
Glutes, Legs, Training
Tony Gentilcore July 3