It has a stupid name and it's stupid looking, but this movement sequence is fantastic, not only for your tight neck and shoulders, but for activating the one muscle group we all need more activation in – the glutes.

The key is keeping your palms down and fingers pointing forward while getting your crotch as close to your face as possible on the roll back, with full extension of the hips in the crab bridge. You'll feel it in the shoulders and biceps more than anything, but get in the habit of firing your glutes and trying to hold the stretch for a brief pause at the top.

Unfortunately, the demands of 21st century living (chairs, cars, and computers) are giving us flat, underactive asses and the posture of that guy who only does bench. So, do yourself and the opposite sex a favor and start crab rolling regularly.

Olympic lifting isn't meant to pack on tons of muscle. But there is a way to train the O-lifts and build muscle at the same time. Here's how.
Bodybuilding, Powerlifting & Strength, Training
Christian Thibaudeau August 3

Improve your conditioning, grip strength, traps and just about everything else with this tough test.
Metcon, Tips, Training
Dan John December 29 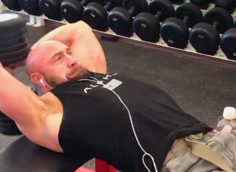 This is the most effective movement for growing the long head of the triceps.
Arms, Bodybuilding, Exercise Coaching, Tips
Paul Carter January 12 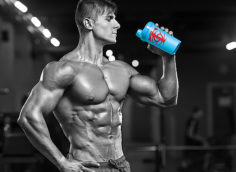 Hardly anyone ever manages to lose body fat while gaining muscle, but that's only because of a few, easily correctible mistakes.
Training
Christian Thibaudeau January 11