Back in the days of Arnold and Mike Mentzer, all bodybuilders did concentration curls. You know how it works: place your triceps against the inside of your leg and curl a dumbbell. It was considered a standard biceps builder and was often used to finish off arm day.

But then we got super smart. The athletic coaches decided that concentration curls weren't "functional." After all, in most sports and in life, muscles never get used in isolation.

Two problems here. One, not everyone is an athlete trying to boost performance on a field or court. Two, if the "function" you want is head-turning arms, then concentration curls and other isolation exercises are "functional." They serve the function of making you look jacked.

You don't see many people doing the concentration curl today. But why? Because it's not functional for all the imaginary sports people play? Or does it just not work very well? Let's ask science.

A whole bunch of PhDs wanted to find the best overall biceps exercise. They rounded up 16 experienced lifters, men and women, and had them test out several common exercises:

The lifters were given a refresher course on each exercise and then they tested their 1RMs. Later, they were strapped up to an EMG machine, which measures total muscle activity. Electrodes were placed on the biceps brachii, the anterior deltoid, and the brachioradialis.

Subjects used 70 percent of their 1RM on the non-bodyweight exercises after testing their MVP (maximum voluntary contraction). A lot of math and science followed, but it's incredibly dull, so let's jump to...

Why? Well, because the biceps is isolated. With the other exercises, secondary "helper" muscles wanted to play too, like the front delts, especially when fatigue set in.

One of the researchers, Scott Young, M.S, noted: "Motivation-wise, it always helps when you can see results. So when you look down and can see the muscle working it helps with your focus. Whether it's subconscious encouragement or whatever, I think that helps."

So, the very fact that you're concentrating on the working muscle during the concentration curl may be one reason why it's so effective. "Put your mind in your muscles" the old-school bodybuilders used to day. They were right.

No, don't ditch the chin-ups. Hey, sometimes we want all those other helper muscles working too. But if your biceps are hard to grow, maybe it's time to dig the concentration curl out of the recycling bin and work it back into your program.

Luckily, we're not a bunch of grad students involved in a study. We can do a little of everything, including "non-functional" isolation exercises to tap into that mind-muscle connection and ultimately stretch out our shirtsleeves a little more. 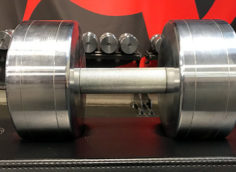 Those aches and pains, that annoying inflexibility, that injury that flares up whenever you try to deadlift a number that's higher than your IQ – all of it could be the result of tight or inflamed fascia.
Training
Chad Waterbury November 20