For a long time I used a shortened range of motion when curling. I believed that it was important to keep the biceps under constant tension and so I avoided going all the way up. Then Paul Carter convinced me to try adding the last portion of the curl: the shoulder flexion. When the arm is fully flexed you finish up by rotating the shoulders up, which will bring the elbow high.

The bicep has three main functions: arm flexion (the curl), forearm supination (which is why I prefer a straight bar) and shoulder flexion (rotating the shoulder up, lifting the arm up). So finishing the curl with a shoulder flexion makes sense.

If you don't feel a stronger biceps contraction you aren't doing it right and need to practice. 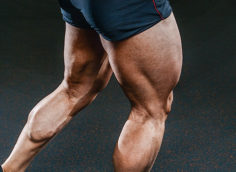 Training out in the garage or in the spare bedroom with minimal equipment? This one's for you.
Training
Ryan Sapstead January 19

Is your main goal to bench press a Buick or build a great chest? The nine differences you must know to get the results you want.
Bench Press, Bodybuilding, Powerlifting & Strength, Training
Rob King May 21

We live in a world of excuses. Most people don't want to accept that when something goes wrong in their lives, they're at least partly to blame.
Bodybuilding, Powerlifting & Strength, Training
Christian Thibaudeau October 19
A list of bonehead practices in the gym
Training
TC Luoma September 21