Stop putting an unnecessary time-cap on your workout. The energy demands of a workout are related to the volume of work done, not the duration of the session.

What About the Testosterone to Cortisol Ratio?

A lot of coaches have been preaching the value of keeping workouts under an hour. They often cite Bulgarian lifters who divide their daily training volume into several 30-45 minute sections. They say this scheme is designed to optimize the testosterone to cortisol ratio, and that training for longer depresses testosterone while increasing cortisol.

The problem? That logic comes from a weightlifting country that has been disqualified from international competition several times because their whole team (or almost) failed drug tests. Call me cynical, but I have a hard time buying the "we want to keep testosterone levels high" argument when it comes from athletes likely injecting ten times the physiological dose of testosterone weekly!

Antonio Krastev even went on record saying that Abadjiev decided to segment the training so that he could better control the lifters whereabouts when they were in training camps, and that maintaining optimal hormonal levels had nothing to do with it.

It's the volume of work that plays a greater role in the testosterone to cortisol ratio post workout. Cortisol is released during training so that it can help mobilize stored energy to fuel muscle contraction. The more energy you need during a session, the more cortisol you'll release.

Now, excessive training VOLUME can impair mTor activation. Elevated cortisol is itself something that blunts mTor activation. And so does glycogen depletion. Depleting glycogen stores increases AMPK levels which itself turns down mTor. Remember, mTor is the switch that turns on protein synthesis (muscle building). So it's true that doing too much training volume in a session can hurt your gains. But it's not the training duration itself that's responsible.

Some of my workouts can last 90-120 minutes. This happens when I have two different Olympic lifts in my workout and I have to do ample warm-up sets to get my technique solid for the day. But none of these sets use a lot of glycogen since they last less than 10 seconds. So even if my workout time is long, it doesn't mean that my hormonal milieu will be catabolic.

Furthermore, using Plazma™ pre and intra-workout can prevent the negative drawbacks of volume. First because you have glucose readily available in your blood stream, which means that you don't have to release as much cortisol to mobilize fuel. And the carbs it provides protects the glycogen stores. If the glycogen stores don't get depleted as much during the session, the risk of turning off mTor are much lower.

While Plazma will allow you to do a lot more volume of work without negatively affecting the testosterone to cortisol ratio, there is still a limit to what you can do. But that limit has to do with volume; training duration is only an indication of the volume and isn't itself the cause of the problem.

The 45-60 minute limit simply allows a lot of personal trainers to fit more paying clients into their day. Don't try to extend your workouts to several hours, but think in terms of volume rather than training duration. 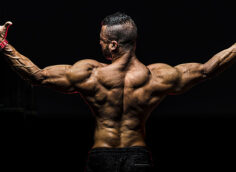 Want a big back? Keep it simple with these three basic exercises and one overriding principle.
Tanner Shuck September 2

You need to know the differences and use the one that’s right for you. A must-read for squat freaks.
Squat, Training
Geoff Neupert & Mike Robertson September 25