When muscle growth slows it's time to mix things up and try something new. Supersets and drop sets are often the go-to for added workout volume, but there may be another way without adding tons of extra sets and reps. This study examines rest-pause training's efficacy in making gains.

Reminder: Rest-pause is when you do a certain number of reps on an exercise, rest for a very short amount of time (10 to 30 seconds usually), then perform more reps. There can be several rest-pauses during a set.

Eighteen subjects (14 males, 5 females) who had at least one year of training experience were split into two groups: rest-pause training and traditional training. Both groups followed the same four day a week exercise split for six weeks, but...

Note that both groups did 18 total reps: the same volume.

One-rep max for bicep curl, bench press, and leg press were recorded for measures of strength. A muscular endurance test was also conducted: maximum number reps performed at 60% of 1RM. Muscle thickness of the arm, thigh, and chest muscles were taken using an ultrasound.

There were no significant differences in 1RM strength between the two groups, but the rest-pause group showed a significantly greater increase in thigh thickness than the traditional training group.

This study showed that the upper body and lower body respond differently to this type of training; however, a longer study may have shown the superiority of rest-pause training in hypertrophy for the upper body as well.

Although not significant, the average percent increase in muscle thickness was greater in the rest-pause group than the traditional training group for both the arm and chest.

Rest-pause training for hypertrophy looks to offer you all the benefits of a traditional plan with the added bonus of greater muscle thickness and muscular endurance. It also cuts down on training time because of the short rest periods, leading to high amounts of metabolic stress. (So be warned, this type of training is really tough.)

If you feel like you've hit a wall or are just looking to change up your routine, give rest-pause training a try. It seems to be more than worth it for the greater increases in muscle size. 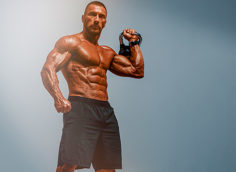 Tip: The Exercise That Fixes Everything
Training
Chris Peil February 27

Not genetically blessed? Here are the most proven workouts for those with lagging or non-responsive biceps.
Arms, Bodybuilding, Training
Christian Thibaudeau October 24