The stronger you get and the heavier you go, the more likely you are to get injured. The guys at the top accept this as part of the process. Success isn't dependent on avoiding injuries. It's dependent on how you deal with them.

The risk of injury increases proportionately to the amount of weight you're lifting. This is because your muscles have more potential for growth and adaptation than your tendons, ligaments, and joints do. Handling heavier weights also requires improved technique. You may be able to get away with terrible form while squatting or deadlifting light weights, but with heavier weights the risk of injury increases.

Often what determines which people reach the top and which fall by the wayside is the ability to successfully come back from injury. View injuries as bumps on the road to success, not dead-ends.

There's a powerlifter that ruptured both patella tendons and was told by doctors his squatting days were over and he'd be lucky if he just walked normally again. This man came back to squat over 1,100 pounds. Another friend with a steel rod in his spine was also told by doctors he'd never squat again. He came back to squat more than he ever had, breaking the 900-pound barrier.

Successfully negotiating injury is more mental than physical. Never doubt your own ability to come back stronger. It's never IF you can come back from injury but rather how long it will take. The fact that you'll recover must be a foregone conclusion.

In 2008 I tore my right quad badly while squatting 545x10 raw. It sounded like a pair of blue jeans being ripped in half. Here's the video for those of you that aren't squeamish.

I couldn't even walk on it initially and people on the internet were talking about how my powerlifting career was over. I'll never forget how one anonymous keyboard warrior even went as far as to say, "Stick a fork in him, cause he's done!"

Never doubt your ability to come back. Those comments only fueled my resolve to come back better than ever. I started with bodyweight squats using a countertop to support myself. At first my arms were doing more work than my legs. But soon I was able to squat without using my arms for support and then I was back in the weight room several weeks after the injury.

I started with an empty bar and slowly worked my way back up each week. The quad tear happened in January of 2008 and in July at the UPA Pro Am, I squatted a PR 1014 pounds. 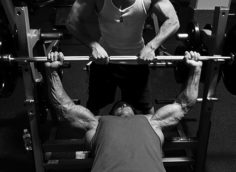 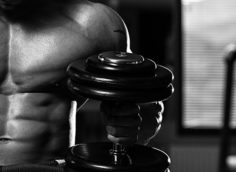 A one-rep max on the bench press only measures a fraction of your real strength. Can you pass this more complete list of tests?
Challenge Training, Powerlifting & Strength
Charley Gould August 16

Most people have never tried this trap exercise. Try adding it to the end of your next trap-centered training session.
Exercise Coaching, Tips
Christian Thibaudeau February 10