Without a doubt, the leg extension debate is one of the most heated in the fitness industry today. Let’s take a look at what the research says and apply our findings in a practical manner. 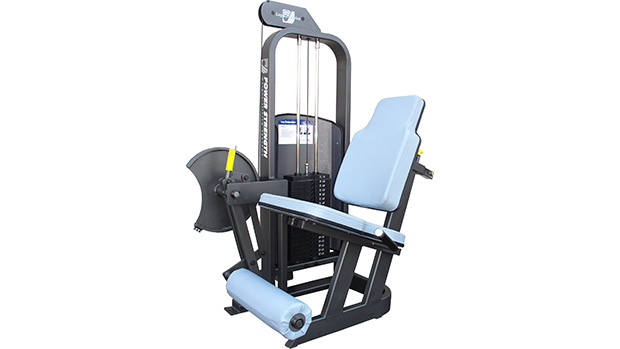 The Leg Extension: Friend or Foe?

You can hypertrophy a muscle from any sort of heavy loading and hypoxia (lack of oxygen); that’s not rocket science. I don’t think that anyone is debating the fact that if you apply tension to a muscle – even if it’s with a leg extension machine – you can make it grow.

But as a performance enhancement coach who gets a lot of corrective training projects, I’m more interested in risk-to-benefit ratio (maximize benefit and reduce the risk of injury, both acute and chronic) and improvements in functional capacity. As examples of the risk-to-benefit ratio, I don’t do overhead work or straight-bar benching with my baseball guys or quarterbacks. They can still derive considerable benefits from different movements without risking shoulder injury. They lift weights to enhance sports performance, not just to improve lifting performance.

Additionally, I choose exercises that enhance performance most efficiently, especially when dealing with athletes who have sport-specific demands that “compete” for training time with what I do.

So, with these considerations in mind, I’m going to divide my approach to this article into “safety” and “efficacy” sections so that you can ultimately form your own opinion – after you’ve heard mine, of course!

Steinkamp et al (1993) examined patellofemoral joint reaction force, knee movement, and joint stress at four different angles of knee flexion on the leg press and leg extension. The group found that all three parameters were greater with leg extension exercises at 0 and 30 degrees of knee flexion – the most “functional” ranges of motion in early rehabilitation cases. (We don’t spend as much time in deep squatting positions, so this is very significant.) (1)

Don’t get your hopes up, leg press groupies! It might be easier on the knees, but it’ll still tighten up your rectus femoris, and I’ve seen more back problems due to leg presses than any other exercise.

Additionally, Escamilla et al. (1998) found that the squat generated twice as much hamstring activity as the leg press and knee extensions. (2) Hamstrings recruitment can be advantageous in enhancing knee joint stability and building strength and functional capacity with hip extension. And, for those of you who’ve ever been involved in an anterior cruciate ligament (ACL) rehab program, you’ll know that the day you can get hamstrings and glute soreness after quad-dominant squatting is the day that you know the athlete is kicking on all cylinders and you’ve done your job!

In closed chain knee extension, the onset of EMG activity of the four different muscle portions of the quadriceps was more simultaneous than in the open chain. In open chain, rectus femoris (RF) had the earliest EMG onset while vastus medialis obliquus was activated last (7 +/- 13 ms after RF EMG onset) and with smaller amplitude (40 +/- 30% of maximal voluntary contraction (MVC)) than in closed chain (46 +/- 43% MVC). (3)

Ask anyone “in the know” and they’ll tell you that rapid and strong vastus medialis recruitment is imperative for knee health – and VMO function is the first thing to go in the presence of knee injuries. Why would we want to do an exercise that promotes delayed firing of the muscle? 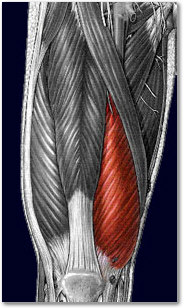 Moreover, the rectus femoris is an extremely common cause of knee and hip pain in lifters due to excessive trigger points and poor flexibility; the last thing it needs is more direct work! What it does need is lots of soft-tissue work (foam rolling, massage, ART) and dynamic and static flexibility attention. 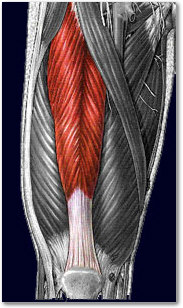 Here’s another cool one. Chow (1999) examined patellar ligament, quadriceps tendon, and patellofemoral and tibiofemoral forces at different speeds of leg extensions execution. Tibiofemoral shear forces showed that the ACL was loaded throughout the ROM – not exactly what you want (passive restraints doing the work for active restraints).

Perhaps more interestingly, the more isokinetic speed increased, the lower the knee joint forces were. And, obviously, submaximal efforts at lower speeds (as in early rehab) reduce knee joint torques. This means that the “middle of the road” speeds that most bodybuilders use are actually the most dangerous to the knee!

To be fair, I should outline that a study by Cohen et al. (2001) of five cadaveric knees found that throughout the entire knee flexion range of motion, “the open kinetic chain stresses were not supraphysiologic nor significantly higher than the closed kinetic chain exercise stresses.” (6) We need to consider two factors when interpreting these results, though:

As for the efficacy of the exercise, I think it’s important to note that “effective” is relative to the desired goal: hypertrophy, functional status, or both.

Stiene et al. (1996) looked at the differential effects of closed (squat variation) vs. open-chain (leg extension) exercise on peak torque and functional capacity in 23 patients with patellofemoral pain. All patients were tested on both a step-up test (closed-chain and more functional to the real world) and a machine leg extension test (open-chain and less functional) of peak torque.

The researchers found that although both groups improved significantly on the open-chain test, only the closed-chain group improved on the step-up test and, more importantly, perceived functional status. (7) In other words, training in closed-chain motion will enhance both open- and closed-chain strength and functional capacity, but open-chain training will only carry over to open-chain.

To what can we attribute this poor carryover in functional capacity from open-chain to closed-chain activities? Well, first, we have the aforementioned Escamilla et al. study (2), which observed a decrease in hamstrings recruitment with open-chain (with leg extensions), the “isolation” approach.

Second, along these same lines, closed-chain exercise requires contribution of the hip abductors and adductors to stabilize the femur in the frontal and transverse plane (more so in single-leg stance). When you’re sitting on your arse, you aren’t doing much stabilizing – unless you count weighing the machine down. In case you haven’t realized by now, if you want to be big, strong, and functional, training movements – not muscles – is the key to superior progress.

Third, closed-chain exercises require simultaneous mobility and stability contributions at the ankle, knee, hip, lumbar spine, thoracic spine, scapulae – all the way up to the head. Talk about synchronization!

It might be minutia to the layman’s eye, but not to someone with an acute eye for clinical significance.

Let’s take a step back and examine our risk-to-benefit situation now:

Whether you’re a patient or not, the take-home message is the same: if you want more bang for your training buck you should be squatting, not doing leg extensions. Factor in the additional loading that squatting allows, and it should come as no surprise that you’ll see better gains in size, strength, and functional capacity.