Shoulder pressing has quietly come back from the dead.

It won't make the history books, but it's a sad fact nonetheless that a generation of misguided trainees (and sadly, many therapists) basically decided that pressing heavy weights overhead leads to messed-up shoulders and shortened lifting careers.

They were wrong. And thanks in part to thinking man's coaches like T Nation's Christian Thibaudeau, Mark Rippetoe, and Jim Wendler, the overhead press (or simply "the press") has reclaimed its rightful place among upper body exercises that every serious weight trainer should be doing.

However, "pressing overhead" is a blanket term – the lift can be performed with a barbell or dumbbells, seated or standing, behind the neck or to the front, and unfortunately, on a Bosu ball while standing on one leg.

Another very powerful variation is the push press. A favorite auxiliary lift among Olympic lifters, the push press uses a 'kick start' from the legs and hips to get the weight moving overhead.

Unfortunately, this has led to the push press being described as a "cheat shoulder press," resulting in some freestylin' technique that would make most Olympic lifting coaches run from the weight room.

As you might imagine, learning good push press technique is somewhat involved, but definitely worth your time if building big, strong shoulders and a big bench press are among your goals.

What's that? The push press improves your bench?

Believe it. The extra weight at the top end of the push press works the same as a board press for the bench press, leading to new PR's in full ROM performance. The bonus is, the carryover from the push press affects both the strict shoulder press and the bench press. And that's efficiency.

Start with your hands just outside of your shoulders or a bit closer, depending on your mobility/flexibility. The key is to be close enough to still get your elbows somewhat under the bar – this gives you more leverage when you start to drive with the upper body.

Wider hand placements are generally used for the jerk; where you get a lot more hip power in comparison to the push press.

This is too tight:

The elbows are close together but drawn forward – not a good leverage position.

This is too wide:

The elbows are too wide to get under the bar.

This is just right:

This position allows you to get your elbows under the wrists.

As stated, with the push press, the initiation comes from the legs, not the shoulders. It's imperative that you have good rack position; otherwise you'll screw up the whole sequence.

A rack position too much like an overhead press will likely result in the movement being initiated by the shoulders. This can cause undue stress to the wrists and limit the overall weight used.

Notice the elbows are slightly pointed out. This creates a strong shelf to load the bar with heavier weight. It also makes it easier for the elbows to get closer underneath the bar.

To lift heavy weights, you must put yourself in the best possible position. The elbows should be placed as close under the bar as possible without sacrificing the rack positioning. This will help you get your shoulders and triceps into the movement – once you have the required momentum from the hips.

And this is bad elbow position:

Your standing position in the push press is extremely important. If your weight distribution is off, the initial dip will fall apart, resulting in you having to waste valuable energy to correct it.

What I've found to be extremely useful is to lean back. At first it will feel weird, but once you get used to it you'll experience a huge difference in terms of smoothness and power. I credit Artie Drechsler and Joe Yu for this tip.

The dip has to be focused on staying upright – if the hips dip back, the vector force will go forward and wasted energy must be spent correcting it. My lifters get tired of me hammering down positioning drills for them, but to push bigger weights, you need to position yourself for it.

Common mistakes of the dip:

Here's a video of a dip that's too back, then too forward, followed by a correct dip:

This is where all the momentum comes from. If you've followed the above steps, you should be locked and loaded, ready to drive the weight up with force.

Bottom line, be patient and let the legs do the work.

Here's a video showing the arms incorrectly initiating the movement, followed by the correct way:

The final step is the overhead positioning. Here you'll want the bar to be aligned directly over your center of mass – too far back or forward can create a miss or potentially lead to injury.

Another mistake I see is with head positioning, with some over-exaggerating the head movement. Here you should simply tuck your chin – do not push your head forward! Pushing your head too far forward can cause your body tp move forward with it.

Here's a video of the head being pushed forward, followed by the correct chin-down position:

You get all that? If not, here's a handy cheat sheet for you:

Knowing how to perform a lift is one thing – let's see how you could fit the push press into a typical training day:

* Push Press – For programming the push press, I recommend sets of 1-5 reps. Higher reps tends to lead to a breakdown of form and potential injury.
* * Dip/Push-Up Ladder – 5 dips, 5-push-ups, 4 dips, 4-push-ups – keep laddering down until you hit 1 dip, 1 push-up.

Here's the whole darn thing wrapped up in a purty little video:

Okay fellas, you're all set. Everything you need to know about performing the baddest overhead pressing exercise in the books.

Just remember, those with the mobility of a picnic table or other contraindications may need to tinker with the hand, elbow, and rack positions, but the dip/drive principles remain the same.

And if you're the least bit uncertain, hire a qualified Olympic lifting coach for a session or two. This small investment could pay big dividends in terms of correcting faulty technique before it becomes a persistent habit.

Give this lift a try and kiss your pressing plateaus goodbye.

Casual lifters won't get this, but you have to be a little bit crazy to get super strong. Here are ten "insane" things you need to do to get there.
Motivation, Powerlifting & Strength, Training
Matt Kroc November 10 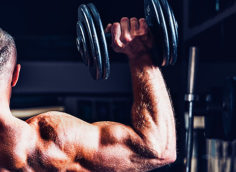 The Z-press is getting more popular. This variation gives you a better mind-muscle connection and even more core activation
Training
Christian Thibaudeau October 26

Want huge hamstrings? Try these little-known exercises that only the strong guys have been using… until now.
Deadlift, Training
John Gaglione November 30