According to recent studies–at least the ones cited in the checkout line mags that my wife reads–the number of choices a person has in life is directly linked to the occurrence of depression. The more choices you have, the higher your chance of becoming depressed.

These days, people have more choices than ever. That's good (I think), but it's also causing them to be confused and depressed. Think about it. Only until the past century did most people get more than a very limited few options. Generally, if Dad farmed, you farmed. For women, "choice" meant having a say in who your husband may be, and even that choice wasn't guaranteed!

The industrial revolution changed much of this rather quickly, and today, especially with the Internet, there are more options than we can even fathom. You may find this news to be, well, depressing, especially if you're a strength trainer. As a person involved in fitness, bodybuilding or sports, I can guarantee you've been exposed to this pandemic. In fact, I think one of the reasons most people fail to improve in strength training is simply this fact:

We have too many choices!

Fifty years ago, this wasn't an issue. If you were lucky enough to find a gym, it had weights. On the floor. Iron only. Usually rusty. Some advanced places like the University of Notre Dame had low benches where you could lay down and "pull over" the bar to do a new fangled exercise called the "bench press."

Oh, how times have changed! Today, you can venture into an airplane hanger that serves as a twenty-four hour spa that'll cater to every whim of conditioning you can consider. You can climb mountains (by hand or bike), spin like you're in the Tour de France, or do some bizarre combination of yoga, weightlifting and martial arts... all at once.

If you decide to get into shape and build some muscle, the choices can be overwhelming. Not only do you have an infinite variety of machines, you even have a choice when it comes to barbells. You have regular bars, fat bars, EZ bars and those new padded bars that some people actually use while wearing gloves! (How much cushion do you need to build a "hard" body anyway?)

We just have too damn many choices. The kicker is, you can make great progress without most of these options! I learned this the hard way a decade ago. I'd found the "perfect gym." Squat racks as far as the eye could see, platforms all loaded with bumper plates and Olympic bars, a sprinting track, boxes for jumping, an area to stretch, and a clientele that included NBA players and Olympians from several countries. Each workout was an insight into the Olympics and the world of professional athletics.

Of course, it closed.

I was left having to train at home with a terrible bar I got at a garage sale, two 35-pound plates and two 25-pound plates... a total of 165 pounds. My options were just a wee bit limited. But during the next six months, I made the best progress of my life! Why? I had no choice! I had to make do and work hard!

I'm not arguing that we leave our gyms or move in as Tom Hanks' roommate on Castaway and train with coconuts and logs... although he did get pretty ripped. My point is simple: for many of us, an occasional round of simplicity, for as little as one workout or one week, can do wonders for our overall training.

Here are some ideas.

A few years ago I broke my wrist in a most convincing way, leaving it in several pieces that required two surgeries. Now, I'm not one to stop training, but it became impossible for me to train in my normal fashion for almost a year.

Because I had few options, I purchased an adjustable Olympic dumbbell that weighed eleven pounds and popped two 25's on each end. My 61-pound dumbbell and I began a long and fruitful relationship. The basic workout was simple:

That was it. And it worked great!

If your wrist isn't actually broken, switch hands and do the whole workout again. If you choose to do both right and left hands in the same workout, start with your weaker hand.

"One Armed " and "Mismatched" Bench Presses

One day I tried to bench my 61-pound dumbbell with one hand. Why? I didn't have any other choice! Turns out, this is a great exercise.

The hard part of the lift is sticking your right leg out far enough to hold the body on the bench and finding a grip for the left hand. Otherwise, even a light dumbbell will drive you and your well-conditioned body right to the floor. The exercise, however, is worth trying as you'll discover that a dumbbell that's one-quarter of your max is hell to lift...if you only use one hand.

The next great idea came from a very cheap friend of mine who fitted his gym with garage sale items. He had a mishmash of weights and dumbbells. You could get "close" when picking two dumbbells, like 65 pounds and 75 pounds, but you could never find any that were the same weight. In hindsight, he was on to something!

Simply do this: train with two dumbbells, but of different weights. When doing something like dumbbell clean and press, you can squeeze out a lot more reps with the combination of different weights than you usually can do with one weight. Drop the 'bells on the ground and switch hands and go again. "Mismatched dumbbell bench presses" can also give an intensity lesson to the best of lifters!

I'm not trying to tell anyone to quit their gym. The issue isn't the gym, it's the whole direction of the fitness industry. Everyone is trying to find a niche, so authors and personal trainers are doing their best to "get a name." Now, there's nothing wrong with that idea. The problem comes when an athlete gets so caught up in gadgets, rep cadence, foot placement, and all the rest that they miss the big picture.

Certainly, part of the big picture is to "Go Hard, Go Heavy, and Go Home," or whatever is on your T-shirt, but the other thing that's often missed is this: you need to give an exercise, a lift, a training program, a supplement, or a diet some time to work.

Back in the 1970's, I was an eyewitness to the greatest change in weightlifting history: the printing of The Education of a Bodybuilder by Arnold. College weight rooms literally filled up within weeks. It was hard to get near certain parts of the gym, especially the bench and the lat pulldown station. Most of the frat boys were on Arnold's six day routine and not one single guy squatted (er, quarter squatted) with more than 135, yet they were all supersetting every exercise. Guys would leap from preacher curl to triceps extensions and back again with a fury that shocked people who hadn't yet seen Pumping Iron.

Rarely, if ever, did any of them improve. None, in fact, followed the advice of the book and marched up the level of intensity from whole body calisthenics to three-day-a-week training to four-day-a-week-training. No, instead they came in prepping for the Mr. Olympia, using the most advanced routine in the book!

They had too many choices! They didn't spend the time on the basics, the simple stuff, before they moved up. The moral of the story is easy to grasp: start with the basics, give the basics time to work, then gradually move up to the fancy stuff, if you even need to!

Basically, think about these four points:

You just might make the best progress of your life. And there's nothing depressing about that! 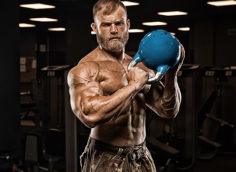 If conventional barbell pressing hurts your shoulders, there's a solution for that. Try these exercises and make some new, pain-free gains.
Training
Bradford Cooke September 30

Is it better to increase the size of a single muscle group or spread muscle equally over the entire body?
Bodybuilding, Training
John Romaniello November 16

Mike Robertson wants to remind you to do some of the great stuff you used to, but may have forgotten about.
Bodybuilding, Powerlifting & Strength, Training
Mike Robertson May 22

A thumbless grip can help you prevent or work around shoulder issues. Here's how to do it safely and effectively.
Overhead Press, Shoulders, Tips, Training
Dr John Rusin November 6