Many coaches recommend that you focus your lower-body workouts around:

This is a great starting point for building a lower-body workout, but it doesn’t fully represent a complete leg and hip-strengthening program. For maximal strength and development, a few other exercises should be performed weekly.

Here are video tutorials for each of these exercises, starting with why I prefer to use single-leg hip thrusts over double-leg barbell hip thrusts. 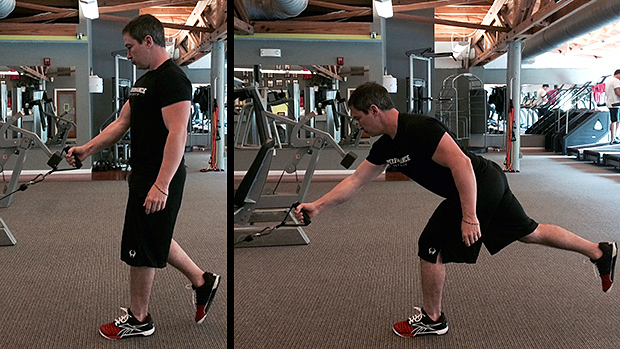 What about cable pull-throughs? Sure, they also load the hips and glutes closer to their extended position, but due to their awkward nature, along with limited ability to continuously add progressive overload, I prefer to use the other options above.

With pull-throughs you’re not limited by the weight your hips can extend against; you’re limited by how much you can hold without getting pulled backward, which has much more to do with your bodyweight than your strength level!

2 – A Hip Abduction and Adduction Exercise

Much has been written about hip abduction exercises like pushing your knees out against a band loop while you hip thrust or squat, lateral band walks, etc. And yes, they should be a weekly component of comprehensive lower-body program.

That said, research on professional hockey players found that they were 17 times more likely to sustain an adductor muscle strain (groin injury) if their adductor strength (muscles that move the leg toward the body’s midline) was less than 80% of their abductor strength (muscles that move the leg away from the body’s midline). (1)

Now, although that specific strength ratio is based on one study, a 2015 systematic review (a study of studies) found that hip adductor strength was one of the most common risk factors for groin injury in sport. (2)

Some trainers may want to argue that compound and single-leg exercises like wide-stance squats, lunges, and single-leg squats train the adductors effectively enough to offset the need for doing additional adductor isolation exercises. However, the highest EMG values for the wide-stance squat (5), along with those found during a single-leg squat and a lunge, are relatively low compared to exercises that focus primarily on the hip adduction movement (6). So, with respect to reaching greater levels of muscle activity in the adductors, isolation exercises are superior to squats and lunges.

Additionally, it’s important to see how the scientific evidence falls in line with the principle of specificity. Research demonstrates that strength gains are highly specific to the part of the movement one trains in, with limited transfer to the rest of the untrained ranges of the movement that may not be addressed in a given exercise (7,8).

Each week, include some type of focused knee-flexion exercise, such as a stability-ball leg curl (single or double leg), Nordic hamstring curl or glute-ham raise, or leg curl machine (seated or lying).

Several studies have shown that strength training programs involving the Nordic hamstring curl, which is basically the partner version of a glute-ham raise, demonstrated a significant reduction in hamstring strains incidence. (10,11,12)

The research on leg curls is also compelling. One study separated elite soccer players into two groups. Although both groups used the same training programs, one group had additional, specific hamstring training using the lying hamstring curl machine and the other did not. The results showed that the addition of the lying curl increased sprint speed and decreased the risk of suffering a hamstring strain injury. (13) 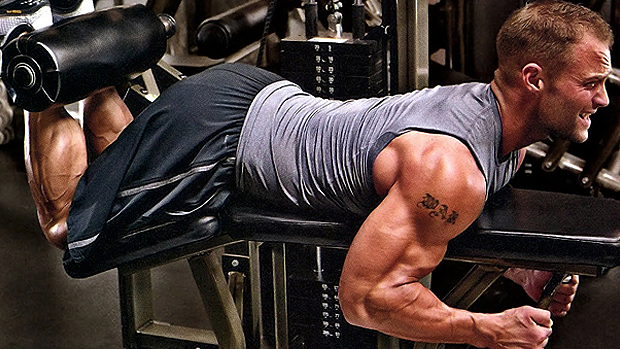 The takeaway from the above research? Single-joint exercises provide a positive transfer into improved performance and injury risk reduction. But there’s more.

This is because different regions of the hamstring complex can be regionally targeted through exercise selection. So, each type of exercise offers unique but complementary training benefits.

That said, it makes sense that the same applies to the benefit of regularly using knee extension-based exercises like machine leg extensions or backward sled pulls, along with more multi-joint knee-oriented exercises like squats, lunges, and step-ups. 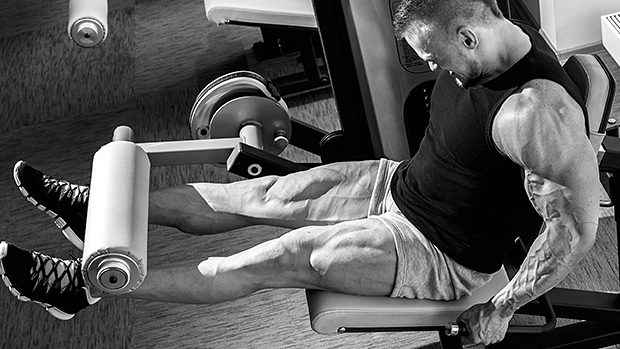 Even if you’re not motivated by that research, we can all agree that muscles respond (make strength adaptations) to how they’re loaded, which is the principle of specificity.

Well, as you descend into the bottom of the squat or lunge (in hip flexion and knee flexion), the rectus femoris is trying to lengthen at the knee but shorten at the hip, and ends up staying roughly the same length. Then as you ascend (performing hip extension and knee extension), the muscle is trying to shorten at the knee but lengthen at the hip, and again ends up staying about the same length. (17)

In other words, to improve your strength in movements like backpedaling, decelerating forward momentum to change direction, or to walk down stairs or downhill, you need to train such actions. Reverse sled pulls and leg extensions are my top two options for the task.

Additionally, many of the arguments against utilizing the knee extension in healthy populations (out of concern for patella femoral joint forces and ACL health) are unfounded and logically inconsistent. (9)

What the scientific evidence says and training principles dictate is contrary to the common belief that just sticking to the “big” compound lifts provide a fully comprehensive strength training stimulus. They don’t.