"Train movements, not muscles." This has been the rallying cry of the post-Schwarzenegger, functional fitness-crazed era.

And it's solid advice, for the most part. You'll get bigger and stronger by improving your squat, deadlift, pull-up, and overhead press than by doing endless sets of concentration curls and seated calf raises.

So in pursuit of training more like an athlete, isolation movements for smaller muscle groups have been relegated to the back of the classroom, deemed only appropriate as "assistance" work that we sneak in if we have time and energy after 10 sets of 3 of the front squat.

By keeping our training for smaller muscle groups like triceps, calves, and hamstrings in the higher rep ranges, we've lost our ability to produce maximal strength – strength that will improve performance in the big lifts while leading to greater muscle size.

While genetics play the biggest role in muscle fiber-type distribution, in most people the hamstrings and the triceps are composed primarily of a variety of Type-II muscle fibers.

These are the fiber types most responsible for explosive power and strength, and to see them in action, look at high-level sprinters and powerlifters, respectively.

Sprinters, particularly those competing in shorter events, have incredibly well developed and powerful hamstrings. And drop by a powerlifting gym and you'll see that the world's best bench pressers have triceps that are about as big as the average guy's quads.

Of course, size isn't the only factor, particularly in muscle groups that are either primarily Type-I dominant or are composed of mixed fiber-types.

For example, many of the world's best leapers don't have huge calf development despite the gastrocnemius and soleus playing a role in jumping, but obviously they have great explosive calf strength.

The point is, increasing strength in these accessory muscles is key to strength, sports performance, and developing muscle density and size.

Before you start testing your 1RM in the seated hamstring curl, understand that doing a bunch of singles isn't the best way to develop strength in these muscle groups.

Since we're talking about isolation movements and there's minimal load sharing across several muscle groups, straining a tendon or pulling a muscle is a serious concern. Therefore, we'll never go below three reps when training these muscle groups directly.

And remember, just because you're training the smaller muscles for strength doesn't mean you should abandon the big lifts or make a triceps rope pressdown your A1 exercise. Large compound lifts allow you to use more overall load and set the stage for an anabolic hormonal environment, so don't throw out the baby with the bathwater.

Here's a simple, 3 times per-week training program that works on both maximal and relative strength while using compound lifts and exercises that focus on smaller muscle groups.

Start this training phase by testing your 1RM in the deadlift, weighted chin-up, and overhead press or bench press. At the end, you'll go back and retest your 1RM so you'll have empirical proof that training in this manner has made you stronger than ever.

Choosing the appropriate load is critical. You want to make sure you're using max or near max weight for each set, meaning that you should be able to complete all sets using a weight that will allow you to only complete the number of reps in that set.

If needed, err on the side of caution and use a weight that gives you one more rep in the tank. Add weight to movements such as the chin-ups and glute-ham raises as needed.

Once you've established your 1RMs, you're ready for the program.

After completing the program, rest for two days and then retest your 1RM in the deadlift, weighted chin-up, and strict press. You should be significantly stronger, in spite of all the "isolation work." 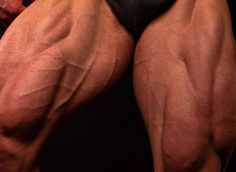 These two exercises will help you build your puny quads, clean up your form, and even strengthen your core.
Tips, Training
Ben Bruno February 7

Here are 6 painful finishers to hammer the quads into growth while sparing your knees.
Legs, Training
Ben Bruno August 7