As far as the popularity of beginner's training programs go, five sets of five reps is right up there with: 3x10, 10x3, and the ever-lasting 1x20 squat program, which inspired the weight room battle-cry, "Squats and milk!"

A few years ago, Dan John wrote an in-depth explanation of several versions of the 5x5 program. Bill Starr also created a popular 5x5 plan that focused primarily on the power clean, bench press, and back squat.

We're going to take a look at one of the very first 5x5 routines to be published, originally written in 1960 by Reg Park in his manual Strength & Bulk Training for Weight Lifters and Body Builders. The late Reg Park was a three-time Mr. Universe winner and he was one of the first bodybuilders to really push the size envelope by competing at a massive 225 pounds in the 1950s and '60s.

Oh yeah, Park is also the number one bodybuilder that little Arnie from Austria admired, respected, and hoped to someday look like. Upon seeing Park on a magazine cover for the first time, Schwarzenegger has said, "He was so powerful and rugged-looking that I decided right then and there I wanted to be a bodybuilder, another Reg Park."

Rest 3-5 minutes between the last 3 sets of each exercise.

After the basic Phase One, Park had a different set of recommended exercises for aspiring Olympic weightlifters. It used a few different sets and reps, and included lunges and power cleans.

As Park explained it, 5x5 includes two progressively heavier warm-up sets and three sets at the same weight. He suggested increasing weights at approximately the same interval, for example:

When you can complete the last 3x5 at a given weight, increase the weight on all five sets 5-10 pounds. Also, he was strongly against training to failure, saying that it encouraged a negative mindset when attempting other heavy, near-maximal lifts.

You are, however, allowed to test for one-rep max at the end of each phase. Park recommends two warm-up sets (1x5 and 1x3), followed by three progressively heavier attempts at a one-rep max. So the max testing day would be: 1x5, 1x3, and 3x1 (for each lift). Take the next four days off from the gym, and then begin the next phase of training.

For the 45-degree back extensions, begin without added weight. Once you can complete all sets, increase your poundage each set while still getting all sets and reps. Park and his training partner often used 135 for the first set, 175 for the second, and 215 for the third, and 235-255 for the fourth.

That's the entire plan, and it's a doozy. Talk about volume training? Mike Mentzer just rolled over in his grave... once. Notice, there really aren't any isolation exercises until the third phase, when you've been training consistently for six months. Only then can you break out some curls for the girls.

As far as recovery goes, Park recommended plenty of sleep and plenty of food. His main sources of nutrition would include whole milk, whole eggs, steak, orange juice, salad, protein powders, wheat germ, and liver tablets. Interestingly, the foods would remain the same when cutting, but the portions would be reduced.

With such a high volume of work, it wasn't uncommon for these workouts to last two to three hours. That's typical of the training in that era, and it's a far cry from the, "get out of the gym in 60 minutes, or you'll sacrifice growth hormone levels!" warnings of today.

Does that make it much worse than programs designed today? Is this absurdly busy training day dangerous, guaranteed to break you emotionally and scare you out of the gym? Not necessarily.

While it might not be ideal, or even fun, to do for the long term, when was the last time you had a juggernaut session and really tried to destroy yourself in the gym? Once in a while, it's okay to break the rules, especially if you have a free Saturday with nothing else to do... and a free Sunday to lie in bed, eat steak, and curse us for daring you to try this plan. 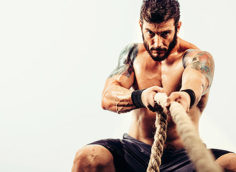 One exercise for back, traps, biceps, and more. Bonus: It's great for metabolic conditioning too.
Training
Charley Gould April 26

Your best gains will come from getting strong on the big basics. Here's why, and what to do.
Tips, Training
Christian Thibaudeau March 10