Rooted in place, mouth agape, he watched as the powerlifter at Fort Hood's Burba Fitness Center squatted 365 pounds, more weight than he'd ever even seen loaded onto a bar.

He must be new, the powerlifter thought.

His mouth fell open again when the lifter sucked in a big breath of air, unleashed a roar that ripped through the gym like a thunderclap, and dropped down for a second rep. Then a third.

As if he had forgotten he was holding them, the poor kid looked down at the pair of 15s in his hands. He seemed embarrassed. The safety clamps on the barbell probably weighed more than the dumbbells he was about to use for flies.

The fact that this powerlifter was a woman must've made it even more surreal for the young private.

"I don't do this for anyone but me," Malinda Baum, longtime Testosterone member and powerlifting champion, told me when I met up with her in Killeen, Texas.

Her house is full of medals from meets held all over the world. She's competed in South Africa, New Zealand, the Czech Republic, Hong Kong, Guatemala, Aruba, England, and Canada. Closer to home, she's won national championships in Omaha, St. Louis, Denver, Baton Rouge, and Killeen. (That one was really close to home, about two and a half miles away.) The trophy case at her gym is likewise packed tight with four-foot-high team trophies. But most of her individual medals are in her closet. She's been known to give them away.

First lesson: You don't do it for the hardware.

Malinda is 45 years old, has four grown kids, an enthusiastic Boxer puppy, and an unenthusiastic husband who just doesn't care much for gyms and personal records. This is surprising because Malinda is consumed with the sport.

"My boss at the fire station once told me that he thinks I care more about powerlifting than I do my job," she said. Her smile tells the story: The firefighter/paramedic gig is not her passion; it's just a means to support her passion.

Her husband doesn't know this. When it comes to finances, they have a mutually agreed upon "don't ask, don't tell" policy to keep the peace in the household.

I asked her about prize money.

"There's no payday," she said. And there really isn't, not for female Masters-level competitors, at least. You might get a free suit or some wraps if you're lucky, but even Malinda, 2007 World Champion in the 181-pound weight class, has to think of ways to raise the funds for expenses.

Her team refs high school events to help out, but that barely scratches the surface. Malinda said she'll take out loans if necessary.

So why compete in a sport that pays nothing, costs a fortune, takes up several hours every day, and beats up the body? What drives her? What drives any of us?

"What the fuck do you want?"

Nine years ago, Malinda was sitting in a sauna at her gym. Someone asked her if she was competing in the upcoming meet. She had no idea what they were talking about.

It turned out to be a local powerlifting meet. When she heard about a meeting of competitors, she dropped in. Later, she showed up to a team practice.

"What the fuck do you want?" asked the coach, Jonny "Truck" Graham.

Malinda had two strikes against her: She was an outsider and a female.

But eight years later, still training with that same team, she became their world champion with a 396-pound squat, 231-pound bench press, and 401-pound deadlift in the IPF Master Worlds. And that 1,028-total wasn't even her best of 2007. She'd totaled 1,045 in the Nationals and 1,034 in the North American Championships.

Maybe that's what the fuck she wanted.

2003: Bench day. Wardrobe malfunction. Malinda's bench shirt hadn't been put on correctly. In high-level powerlifting, even your safety equipment can be dangerous.

She heard a dull snap. Not really a sound, but a feeling. Pop.

She racked the bar and looked down at her chest. A bone was pushing out against her skin.

Later, a doctor told her that nothing showed up on the preliminary X-rays. She pointed to the protruding bone.

She asked the doctor if she could compete. He said no.

She rephrased the question. Was there any way she could make it worse?

"Not really," he replied.

Three days later, with a dislocated collarbone, she competed in the women's Nationals. And won.

Back in the Fort Hood gym, Malinda sat down beside me on the bench and said, "It's not a hobby, you know."

Graham, her coach, came over and began to wrap her knees. The pain was immediate.

This is what non-powerlifters don't understand: It hurts. It all hurts. The wraps hurt like hell. The suits cut into your skin, leaving scrapes, bruises, and blood blisters. This happens at every meet, every practice.

Then there's the lifting itself. Single reps that can tear pecs off the bone, mangle shoulders, blow knees. It's common, it's expected, it's part of the game.

No, it's not a hobby. That diminishes what it truly is.

Her coworkers don't understand. They don't see why she uses every vacation day for a meet. They don't get why she takes a handful of tablets and capsules with every meal, don't comprehend why she doesn't just do some cardio or do the machine circuit to "tone up a little."

Malinda's commute to work is a 300-mile roundtrip. She gets up at 3 a.m. to begin her workday. She does this so she can live near her gym and her team. She spends at least three hours a day in the gym and has missed only two scheduled training sessions in nine years. If she's not training, she's helping other people train.

For every hour she lifts she does an hour of stretching and prehab work, a protocol she learned from strength coach Ian King.

"Who says powerlifters don't stretch?" she joked 45 minutes into her pre-workout routine.

Neither Malinda nor Ian completely buy into the idea that stretching or extended warm-ups decrease strength. Sure enough, for a top powerlifter, her list of injuries is short. When I mentioned this to her, she quickly walked over and knocked on the wooden platform in the squat cage.

After her knees were wrapped, she put on her wrist straps. There was no more talking. She chalked her hands and grabbed a small white bottle. She opened the lid, inhaled, and immediately snapped her head back. Her nose was on fire, but her mind was clear. Tossing the smelling salts aside, she stepped up to the bar.

The song playing on her iPod: "Pain," by Three Days Grace. The weight on the bar: 365, which she'll use for the triple I described at the beginning. At the time we talked, her plan was to plow through her squat PR of 405 pounds at the upcoming Masters Worlds, hitting 420 or 440, more than enough to win the 181-pound weight class. It wouldn't happen – she failed to pass any of her squat attempts, and had to settle for silver medals in the bench and deadlift. But that was in the future, and it's hard to imagine anyone being more in the moment than Malinda as she stepped onto the squat platform.

As soon as her feet touched it, Malinda was gone. The friendly, funny, wonderfully potty-mouthed woman I'd watched sweet-talk her puppy that morning had left the building. The woman who ducked under the bar was different. The person who dropped low into the hole wasn't the woman I was getting to know. The person who came out of the hole – eyes bulging, face red, teeth gritted – scared me a little.

Wraps off, straps off, suit pulled down, it was another five minutes before Malinda was back. Later, she showed me her upper legs, bleeding and blistered.

This is not a hobby. Hobbies don't hurt this much.

As Malinda and I walked out of the gym that day, I looked back at the vast facility. Half of it is full of rusty plates and dumbbells; the other half is full of shiny new selectorized machines. Whatever the medium, resistance is the common theme.

When Malinda steps up to the bar, she doesn't think about bills and long commutes. For just that moment, that single rep, she's only worried about going down and coming back up.

Put enough weight on your back and you can't think about anything else. And maybe that's a good thing.

Malinda had, without really saying a word about it, taught me a lesson about resistance. Powerlifting has molded her, strengthening much more than her muscles and tendons.

Life pushes Malinda. She pushes back. 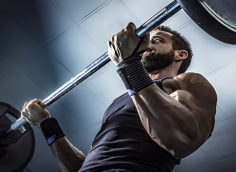 Do this and you'll build muscle, regardless of the number of reps you're using.
Training
Nick Tumminello August 11 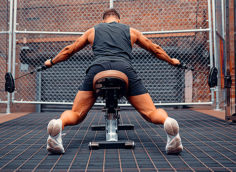