For years, it's been the same story. Nervous excitement fills your every muscle fiber as you read the latest program offered to you for free at T NATION. "I can't wait to try this out at the gym tonight" you say, and tonight can't come fast enough.

But it always ends the same. You, sitting on the bench, massaging your aching knees. Every time this happens you believe that soon it will "fix itself." But it never will.

Fact is, few injuries are as debilitating as knee pain. There are solutions out there for nearly every other problem. Barbell benching rough on the shoulders? Try using dumbbells. Tweak your back deadlifting? Do some front squats, hip thrusts, and reverse hypers. But knee pain? There's always changing leg day to next Tuesday, or the Tuesday after that. 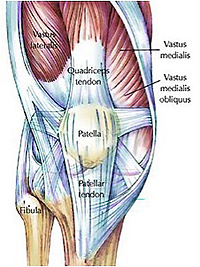 Most T Nation readers are smart enough to know the difference between simple knee pain and discomfort and something severely wrong. The latter can't be treated over the Internet, but in many ways, you're almost better off with a Joe Theismann-esque lower leg injury requiring an operating table and getting your flesh mutilated with sharp metal objects. In such a scenario you know what the problem is and you know the path to rehabilitation.

But for those with everyday aches and pains, do you really ever know what's wrong? Better yet, does your doctor? Once interior damage is ruled out, it's a guessing game.

What are the common sources of chronic knee pain, what's the difference, and how are they treated? Most importantly, what's causing your pain?

Patellar tendonitis is acute (short term) inflammation of the patellar tendon, which is formed from the quadriceps tendon. It usually gets aggravated after an intense bout of exercise. If you were playing basketball, you'd have a concentrated ache below the knee post game. Easily fixable with rest and ice.

Tendonosis is a more severe form of tendonitis. By fighting through the acute bouts of discomfort, the pain can become a chronic (long term) issue in which the tissue degrades over time.

Unlike tendonitis, the pain nestles above the knee cap, usually in the quadriceps tendon area. If you were playing basketball you'd be in pain before the game started. You'd need extra time to get the juices flowing and probably would be sporting a brace or wrap during the game.

Ironically, both of these conditions improve when blood is pumping to the area. For most high paced team sports, the constant moving will dull the pain. But when the legs are called on for high force contractions, pain increases. This usually makes lifting weights unbearable.

Mistracking is a confusing and misunderstood phenomenon. A few years back, it was said to be caused by a muscular imbalance between the vastus medialis oblique (VMO) and vastus lateralis, causing an uneven pull on the kneecap. Efforts were directed at strengthening the VMO.

Terminal knee extensions are performed with a band tied around an immovable post and then looped behind the knee cap. The knee is then slightly flexed and fully extended, with the focus on contracting the quadriceps.

Peterson step ups are similar, only the resistance was provided by stepping onto a slightly elevated platform. Both target the top half of knee extension.

There's research emerging, however, saying that the VMO might not be as important as once believed. A 2009 meta-analysis found that preferentially activating the VMO doesn't really happen, and these results were congruent with another meta-analysis in 2008.

Chad Waterbury recommended the use of a neutral grip for performing high-frequency pull-ups in 13,064 Pull-Ups in 5 Months as various elbow and shoulder injuries can result from the frequent use of pronated and supinated grips. In other words, the position of the wrists can influence elbow and shoulder health.

So if you embark on a quest of doing 100 chin-ups (supinated grip) per day and get elbow tendonitis, elbow specific rehab isn't going to fix you. Instead, you need to change your wrist positioning during chin-ups.

It's similar with the knee. A hip or foot that's out of whack causes a kink in the chain. The knee, being the middle man, is at the mercy of their functioning. It's not so much a problem with the quadriceps or its tissues. It's that a bad hip or a bad foot is forcing those structures to work more than they're supposed to.

Here are three practical tips that can be implemented immediately.

If squats are making tears dribble down your face, a few months without them isn't going to kill you or force you to wear sweats in the summer to conceal your chicken legs.

It may not even require ditching all squats, but it could. It might even mean deadlifts. You have to get rid of the exercises that cause pain, at least for a while. Even if they only hurt "a little bit." They shouldn't hurt at all.

Find the lower body exercises that can sustain your psyche for the next few months. It might be good mornings, Prowler pushes, sled drags, whatever. As long as your knees feel good when doing them.

Next, crush – and I mean crush – your glutes with an absurd amount of joint-friendly volume. They are the largest (and, might I say, most visually appealing) muscle in the entire body.

Those with knee pain lack hip control, which means that the knee ends up doing many of the things the hip should. Developing control starts with creating an intense mind-muscle connection with the glutes. Doing terminal knee extensions and the like hurt you more than help you because they only reinforce the duty of the quadriceps to override the hips.

So pick a bodyweight exercise that gives you the best glute burn. Glute bridges, hip thrusts, bird dogs, back extensions, and reverse hypers are good choices. The only rule is that your glutes power the movement. If you pick reverse hypers and your lower back is burning out, pick a different exercise. Aim for a minimum of 100 repetitions per day, topping out at 300 for those with the dedication.

The big question is, "When can I start to reincorporate squats?" The answer is whenever your mind-muscle connection borders obsession. If you're not feeling your glutes when you walk up steps, get in and out of your car, and stand up from the toilet, you're not quite "there." And when you get "there," make sure your glutes control the movements that used to evoke pain.

This means starting over. Master your bodyweight before moving onto a barbell. Chances are you weren't close to breaking a world record, getting sponsored, or winning a gold medal so it's all good.

The knee is a hinge joint, kind of like a pair of scissors. If you open and close them in one direction all is well. But if you twist the handles, you can hear the blades grind against each other.

Altering the natural hinging groove is a big reason why people have noisy, crackling, crepitus-filled knees. To prevent it, you have to minimize lateral movement of the knee under an external load. 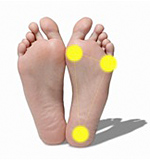 Most people are aware of the dangers that are associated with the knees collapsing inward during a squat. But not many people seem to be concerned with the other extreme – knees too far outward. The truth is that each position comes with unwanted baggage.

The foot has three bony protuberances that are the foundation for balance. Together, they form what's known as the tripod. When the weight is too far inside or outside of the tripod (as with knees too far in or too far out), it inhibits the ability of the hips to do their job. This is crucial for a healthy functioning lower body.

The ideal relationship during any standing exercise is that the knee tracks over the second/third toe. If it's there, your weight has to be centered over the tripod, which allows for maximum hip involvement. Shoving your knees to the outside is great if you're having trouble with them caving in. Otherwise, you're just creating more problems.

If I had to pick one muscle that was responsible for knee pain it would be the rectus femoris. Not because of any crazy muscular imbalances, but because we sit down so damn much. You live in hip and knee flexion. The lucky rectus femoris crosses both the hip and knee so it gets shafted from top to bottom.

To fix it, simply smash it with soft tissue and flexibility work. Throw away your foam roller and bring out the lacrosse ball. Work the length of the rectus femoris with small up-down-back-forth motions. Repeatedly flex the knee when you have a sensitive area trapped.

Don't be predictable. Soft tissue work is kind of like combing your hair. The knots untangle in one or two strokes if you always go in the same direction, but as soon as you comb against the grain there's a host of knots that you wouldn't have noticed otherwise. Target an area and hit it from all angles.

As for flexibility, you need a stretch that gets you in hip extension and knee flexion. Some may recognize this as the wall stretch, but I'm going to give you a little secret: don't do it against a wall. Instead, find a bench or chair; something that you can shove your knee under.

Once you're in position, follow these three steps for the leg that's elevated on the bench.

First, squeeze the glute. Second, tilt the pelvis forward and up. This may be a bit confusing, so just think of having the posterior pelvic tilting posture of a nerd. This is to safeguard you from going into an anterior tilt, which reduces the effectiveness of the stretch. Third, try getting your glute to your heel.

Hold as long as tolerable, but amass 2-3 minutes per leg. It's going to be painful, so do it as a cool down. Once comfortable, feel free to turn, twist, and reach for a more intense stretch.

If you suffer from knee pain you're a different animal. You can't follow the same rules as everyone else. You have to change the game. These three tips just scratch the surface of helpful things you can do to feel young again. Use them as your foundation.

My last recommendation would be to clean up your diet a bit and avoid processed things as they encourage inflammation. Take a quality fish oil and trust in the process. See how you feel after a month or two. My guess is much better than how you feel right now. 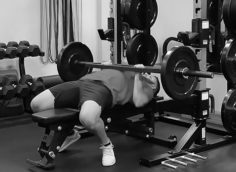 Spare your joints and build your chest with this smart variation.
Training
Matthew Ibrahim September 29 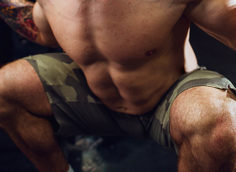 Here's a quick way to fire up the right muscles so you can lift more weight and protect your back.
Training
TJ Kuster February 17

The bench press may be everyone's favorite upper body barbell exercise, but its shorter-ranged cousin could be even better.
Bench Press, Training
Eric Bach February 13