Exercising is really a lousy way to burn body fat. The amount of calories burned surprises most people. One would practically have to drag a sled filled with pig iron up Kilimanjaro to equal the number of calories saved simply by not helping themselves to seconds at dinner.

The fact is, simple calorie restriction works much, much better than exercising. And now there's some scientific proof to back up the idea that exercise just doesn't measure up when it comes to fat loss. How much of a kick to the solar plexus does a new study provide to this time-honored belief about exercise?

Well, for every 100 calories you might expect to burn from exercising, you actually burn fewer than 72. That's just the average, though; you might even burn fewer calories.

This is because levels of activity reportedly "bring diminishing returns in energy because of compensatory responses in non-activity energy expenditures." In short, you're burning fewer calories than you thought, and the result of multiple minutes or even hours of exercise isn't additive.

In other words, if an activity supposedly burns 100 calories an hour, doing it for two hours won't burn 200 calories or anything near that number.

Scientists have long suspected that there was something weird going on with exercise and energy expenditure, but the idea really gained traction in 2012 when a study on African hunter-gatherers was published.

While these tribespeople spent hours walking, trotting, hacking at brush, climbing trees, and bending over to pick up foodstuff, they burned about as many total daily calories as the average Westerner whose most strenuous daily task was leaning out their window at the drive-through to receive their sack of chili dogs when they misjudged the distance from their car to the cashier.

The only possible conclusion from that study was that the bodies of the hunter-gatherers were somehow compensating for all that work so that they wouldn't starve while looking for food.

The study was probably part of the impetus for a group of scientists from around the world, led by Vincent Careau and Lewis Halsey, to pool the metabolic data from multiple studies involving 1,754 men and women, all of whom had drank "doubly labeled water," which is the benchmark for metabolic research. (The technique was developed for measuring free-living energy expenditure in animals and humans.)

They then compared these numbers to statistical models to figure out just how many calories people burned by moving more, e.g., exercising.

What they found was that people don't tend to burn more calories when exercising... well, at least as not as many as you'd expect. As I revealed above, most people seemed to burn only 72% as many calories, on average, as what might be predicted from traditional estimates of exercise and calorie expenditures.

Furthermore, this number was hugely affected by body mass. Heavier people might compensate as much as 50% for exercise. That means that if the already hugely inaccurate gauge on the treadmill said they were burning 200 calories an hour, they might only be, in reality, burning 100 calories.

This may well explain all those overweight people who sometimes spend hours on the treadmill for weeks on end, only to lose hardly any fat. We may owe all of them an apology for suspecting that they were fueling their workouts with copious amounts of pastries.

The inconvenient implications of this study, at least for people who exercise and are body conscious, is that the calorie-burning effects of exercise aren't what they're touted to be. It also helps explain the findings of mathematician Kevin Hall, Ph.D., whose calculations foreshadowed the findings of Careau and Halsey.

Hall figured out that over the course of the first year of a diet, people only lost about half of what's predicted. He calculated that for most people, the true number of calories it takes to burn a pound of fat is around 7,000 and not the 3,500 we've all been taught.

So, according to their findings, the more active you are, on average, the fewer the percentage of calories you burn up because your body compensates. This compensation can occur by reducing the amount of energy expended in non-exercise activity thermogenesis (NEAT) or by some other unthought-of phenomenon.

All of this, of course, seems to be ruled by genetics. Some people might be "weak compensators," and for them, exercise might indeed be a valuable fat loss intervention (although not nearly as valuable as just practicing some calorie restriction).

"Strong compensators," on the other hand, might want to accept that, for them, the primary goal of exercise should be to reap its other benefits instead of significant weight loss.

In the future, we'll probably be able to test individuals to see whether exercise is "worth it" for them as a weight-loss intervention. Even so, my initial point remains: Calorie restriction is a far better way to lose body fat, regardless of whether you're a strong compensator or a weak compensator.

This is brutal. And smart. But mainly brutal. And it'll trigger biceps growth like nothing else. Check it out.
Tips, Training
Charles Poliquin April 3
Exactly three weeks ago, I posted an article I called The Oscillating Wave Program.
Training
TC Luoma March 19 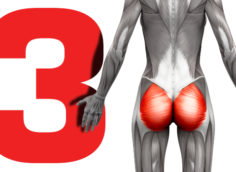 Get your backside pumped with these primers before going heavy.
Training
Gareth Sapstead March 9