T Nation is known for providing cutting-edge training and nutrition info. We're also known for telling it like it is, even if a few feathers get ruffled. So, let's dishevel a whole brood of chickens by asking our staff a simple question.

What's something you're not supposed to say about fitness even though it's true?

Here's how they answered:

Granted, exercise can burn a lot of calories, but as I've written before, it would involve manic exercise, like doing crap you see in the CrossFit Games or swimming across the English Channel while towing a barge full of naked ladies/men cheering you on, and not just for a day or a week or a month, but every day for an insufferably boring length of time.

But that kind of effort isn't sustainable. You might be able to pull it off sweating like a farm animal for a while, but it'd get tedious, even with the naked people. Furthermore, it'd take too much damn time. You'd need to become the equivalent of an incel and forgo all other semblances of a normal life... maybe keep a good supply of blue meth on hand, too.

But let's say that you're normal folk and don't want to spend all that time exercising. Let's say you just want to do a sane amount of exercise to lose some body fat, something like adding 20 minutes a day on the treadmill after your resistance workout.

Maybe your ticker's in pretty good shape, so you can trot along on level 6 for 20 minutes. Great, but you'll only have burned up around a meager 200 calories.

You know what else burns up about 200 calories? Bowling. Granted, you'd have to bowl for an hour (while turning down any chili cheese fries or brewskis) instead of the 20 minutes you spent on the treadmill, but either way, it just isn't a hell of a lot of calories.

Short bouts of exercise, unless they're so intense you need to have someone holding some electro-shock heart paddles at the ready, just don't burn that many calories. And this isn't just true of "cardio," either. It also applies to lifting weights, and it's especially true of piddly little exercises like triceps kickbacks or biceps curls, which is what you often see inept trainers having overweight, out-of-shape clients do to burn fat.

Sure, those clients need to accept the need for exercise to keep blood sugar in check, help their heart, build metabolic capacity, and increase metabolism by adding muscle, but they need to be disabused of the notion that exercise, especially the kind that barely makes them breathe hard, is going to do much for their waistline.

The best thing an honest trainer could do with a client who wants to lose body fat is plant them on a treadmill at a heart-healthy pace for an hour while beating it into their head – using charts, graphs, or holographic projections of savvy nutritionists – that energy restriction and adherence is what works for fat loss.

And I'm not talking about conventional dieting. That's not sustainable either. I'm talking about energy restriction through plain ol' sensible eating.

If they put one dollop of mayo on their tuna salad instead of the normal three, they'd save themselves about 240 calories, which is more than the 200 they might have just burned up on the treadmill. If they substituted the cup of raisins they throw into their morning oatmeal with a cup of raspberries, they'd have avoided 400 extra calories, which would take an amount of exercise tantamount to cleaning out Hercules' Augean stables to burn.

If they simply turned down their normal, post-workout scone, it might save over 500 calories, and that's a hell of a lot more than any normal, non-near-lethal amount of exercise could burn in a reasonable amount of time.

Add up all those little substitutions and occasional food avoidances and they'll end up losing body fat a lot quicker than they could by exercising. – TC Luoma

You know how everyone talks about that one guy in the gym who, year after year, looks the same? Well, I'm that guy. And it doesn't suck.

Look, this isn't a sanctimonious call for body positivity or self-love or anything like that. I'm just tired of physique goals. Building the booty, building the shoulders, building the abs, building the legs... I've worked for those things. There's nothing wrong with it. But none of these feel compelling anymore. And I don't dislike the muscle size that I've already built.

So why not make strength a goal? Cool. But functionally speaking, my strength is good enough for everyday life. There's nothing I'm unable to do outside the gym that I need more strength to do. And I'm not the type to run up to strangers and tell them how much I can deadlift. (Nobody cares.)

Granted, there are good reasons to have goals.

If you don't even look like you lift, yet you're in the gym every day, then, yep, that may be an indication of what your next goal could be. And if you haven't made working out a weekly habit, then your first goal needs to be creating a routine.

Sure, I'll always work toward gaining more strength in some major lifts. But I'm not doing the math on the percentage of my 1RM required for each set. And since my joints and nervous system aren't improved by maxing out, that's a thing I feel comfortable skipping. The risks aren't worth the rewards.

So, I'll casually continue adding more weight here and there, but it's not what fires me up.

You know what does? Consistently challenging myself and enjoying it. That's not really a goal. But for now, I'm okay with that. Even if it means that this time next year I'll look exactly the same as I do now.

Oh, and by the way, if the guy you mock for looking the same every year is leaner and more muscular than you... maybe you should figure out what he's doing to maintain his physique. – Dani Shugart

Treasonous! I know, but let me explain.

Yes, building muscle should be the primary fitness goal of every human. You'll be stronger, healthier, more confident, more functional, and much nicer to look at naked. I will always be on Team Muscle.

And here comes the big ol' but.

BUT, after decades of having hypertrophy as your number one goal, you're probably at – or very close to – your genetic potential for accrued muscle mass. The actual amount varies due to genetics, but it's probably somewhere between 30 and 50 pounds for men, 20-25 pounds of barbell-earned muscle for women.

Now, if you've been at this for decades, you're probably reaching middle age. So tell me, assuming you haven't been training like a wuss and eating like an idiot, just how much more muscle do you expect to build naturally after the age of 45 or 50?

Sure, we all probably have a few genetically-available pounds left in us, but how much do those pounds cost in terms of time, joint health, overall health, and even mental health?

No, I'm not. In fact, you're going to be lifting weights a lot just to maintain the muscle you've built. But hypertrophy probably shouldn't be the primary goal anymore. Maybe it should be pushed down to number two or three on the list.

So what should the main goal be? Statistically, it's probably fat loss.

Does it make sense to eat in a caloric surplus for another decade just to squeeze out those few paltry pounds of muscle left on the table? Nope. Especially when there's a bounty of physique-enhancing, low-hanging fruit available. That juicy fruit is called fat loss.

If you've been training for decades and have built a lot of muscle, keep lifting, but focus on what I call "4-pack leanness." Not unsustainably ripped, but lean.

No extra fat to lose? Cool. Focus on work capacity or mobility.

Or how about this: Focus on the kind of training, nutrition, and supplementation practices that keep your heart healthy and blood pressure under control.

As a middle-aged lifter, I'm getting really tired of watching my peers die. Yep, they were big. Sure, some used steroids to do it, and that comes with its own set of matching luggage, but most of them just became so obsessed with size that health was sacrificed.

Listen, be awesome with what God gave you. If you started at 150 pounds and ended up at 190, so be it. Now go be a lean, long-living 190-pound human who can do a backflip. Because that's cool, too. – Chris Shugart

Hate to break it to aspiring fitness writers, but that article you're considering about an awesome new way to train? It's really not necessary. More importantly, it's almost certainly not new.

Fitness training, originally called physical culture, has been around for well over a century, and if anything's been made clear, it's that they figured out the most effective basics a long, long time ago and not many people have done much to improve on them.

Plenty of the info readers see today is either a modernized update on a classic method or a refresher of something that was established in a time long before the internet. And before television. And in many cases, before radio.

Reinforcing your daily nutrition with specialized amino acid/protein drinks to recover faster? Sandow and Saxon were both writing about it, you guessed it, in the early-1900s. Although, Saxon was a fan of beef extract while Sandow was advocating a kind of egg white concentrate.

When in doubt, just squat, bench, and deadlift? In 1901, Thomas Inch said he "has never yet seen these three lifts fail to improve a man's all-around capabilities." Technically, he was talking about a floor press, but the point remains.

Wanna get in great shape using farmer's walks and kettlebell swings? Alan Calvert wrote about it in the 1920s. Using heavy compound lifts followed by lighter isolation exercises to build a combo of size and strength? Again, that was Calvert in the '20s.

Staying in shape by doing some form of "G.P.P.", low-intensity activity, or non-exercise physical activity (NEPA) on days you don't lift weights? Thomas Inch covered it in the 1930s. But, to be fair, Inch gave badass examples like throwing a lasso and practicing with a bayonet, not wearing a weighted vest while mowing the lawn.

We haven't even gotten into the 1940s or '50s when bodybuilding-focused training really took off. Even back then, there were plenty of techniques that have recently become "new." Heard of the one-day arm specialization where you do curls and extensions every hour for 6-8 hours? Nah, definitely not new. Peary Rader wrote about it in the 1950s.

Those principles will never change, but the details that implement them are what can keep today's lifters following the old school methods, whether they realize it or not. – Chris Colucci

Everything you ever wanted to know but was afraid to ask.
Living Better, Pharma, TRT
Cy Willson January 5 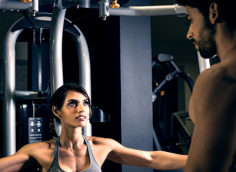 Really, it's embarrassing. But there is a less creepy way of striking up a conversation.
Opinion, Strong Words, Tips
Charles Staley October 18

He's probably the best quarterback of all time, but is it because of his weird, restrictive diet? Hell no! Check out what this bonehead won't eat.
Dietary Myth Busting, Feeding the Ideal Body, Nutrition & Supplements, Opinion
TC Luoma February 26
Sex, Sand, and Rock & Roll
Opinion, Strong Words
Chris Shugart June 21