Regardless of who you are and what your goals include, you need strong midsection muscles. They’re as crucial to your overall health as they are to your athletic performance.

Most of us, of course, understand this at some level, and dedicate a fair amount of time to targeted abdominal training. But how effective is that training? How do you know if it’s working?

In my experience, lifters have no idea how much midsection strength they possess. That’s because no one knows how to test it. We have lots of exercises – and most of us are pretty good at the popular ones – but nothing that we all accept as a legitimate test of ab strength.

In my work with athletes and clients, I’ve found that the two tests I feature in this article give us a legitimate benchmark. Each test has four levels, and if you pass the Level 4 version of both tests, you deserve a big pat on the back. You’re a strong dude … at least in your midsection.

But let me warn you: Some of the biggest, strongest guys reading this will not pass Level 4. Some won’t pass Level 2. That’s because their core strength is underdeveloped relative to their size and total-body strength.

Before I show you the tests, I want to note that these are tests of strength, not stability. They’re not the same thing, although even experienced coaches sometimes get crossed up by the differences. If the spine is moving, as it is in the tests shown below, it’s a strength exercise. If the spine doesn’t move, as in a plank hold, it’s a stability exercise.

With that cleared up, let’s get to the fun stuff.

The following tests don’t require any supervision or special instruction. No matter your experience or fitness level, you can give them a shot. Once you’ve determined your level, you can use the test exercises as part of your training program, as I’ll explain below. They’re as simple as they appear in the photos.

This test of spinal control has four levels of difficulty. Here’s what each level says about your abdominal strength:

Begin with Level 1. If you’re able to that exercise with proper form, go to Level 2. If that works, try Level 3. And if you can do that one, go to Level 4.

At all levels, it only counts as a successful repetition if you’re able to perform the movement with deliberate control throughout the range of motion. You have to be disciplined about this: If you need to generate momentum, or lift one or both heels off the floor, or otherwise hitch or jerk to get through a sticking point, don’t count that as a successful test.

You only pass to the next level if you can do the exercise as shown without cheating.

Once you know your level, the test becomes your training exercise. If you failed Level 3, for example, then you want to do sets of up to 12 reps of the Level 2 exercise several times a week for two or three weeks.

Then try Level 3 again. If you pass, but you can’t get Level 4, the Level 3 exercise becomes your new training exercise. Your goal is to build up to 12 reps with perfect form, then try Level 4 again.

Your ultimate goal is to progress until you can do multiple sets of 10 or more reps of the Level 4 exercise. 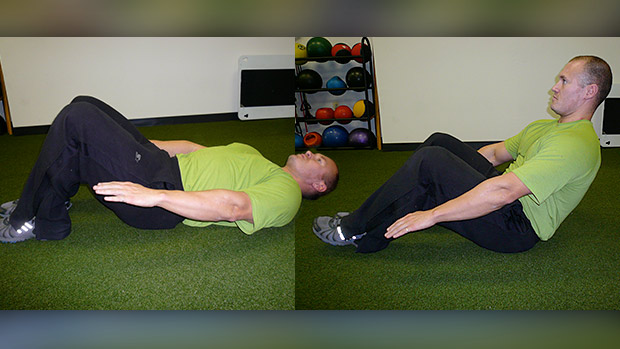 Easy? You got it with no hitching or jerking, and kept both heels on the floor? Excellent. You’re ready for Level 2. 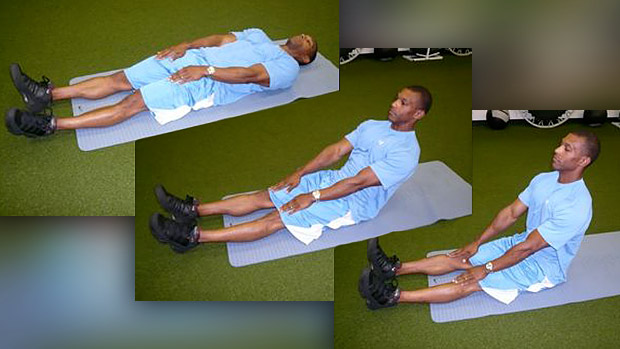 When I tried this on two Testosterone Muscle guys at a conference in September, the middle-aged editor passed, but the contributor who’s a competitive bodybuilder couldn’t do it without one leg coming off the floor. It can be humbling. 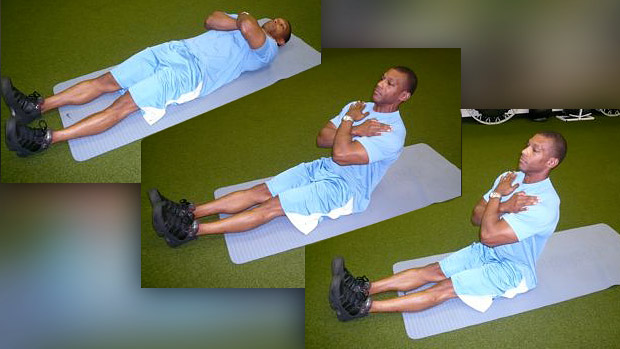 I’m pretty sure the editor got this one as well. (Editor’s note: yes, he did.) It’s harder than it looks. 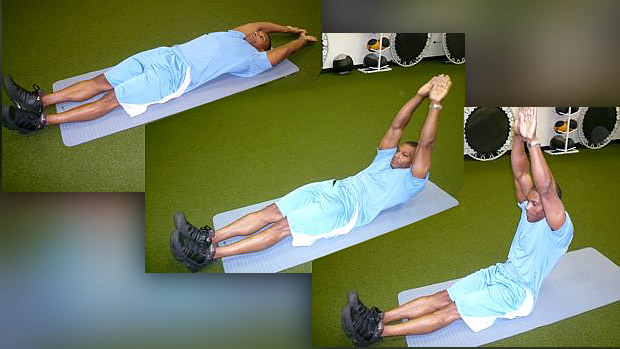 The key with this one is to keep your arms next to your ears throughout the movement. That means your shoulders, neck, and head all move up as one unit. The editor didn’t get this one in September, but after months of training with the Level 3 exercise he says he can do several reps of Level 4 before his form breaks down.

Before we move on to the second test, a few notes:

Now that you’ve tried a top-down exercise, it’s time to see if you have equivalent strength when you lift from the bottom up. Reverse crunches test your pelvic control, and they also require a lot of oblique strength.

Continuing with the contrasts, you’ll do the tests in reverse order, starting with Level 4 and moving down until you can complete a repetition with perfect form. Why? I’ve found that it works better to regress this movement, making it easier as you go along, while the first test works better when you make it progressively harder.

As before, you have excellent core strength if you pass the Level 4 test, and you really have some work to do if you can’t do Level 1. 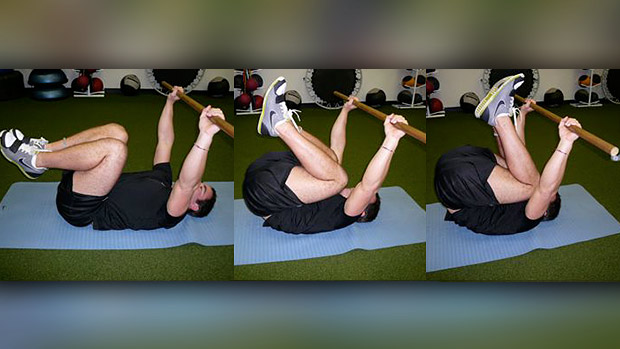 Assume a cannonball position, as shown below, holding some kind of bar (broomstick, dowel rod, unloaded barbell) straight up over your chin. As with the sit-up progression, the goal is to complete a repetition without hitching or deviating from the starting position to generate momentum.

The next two photos show common ways of cheating on this one: lifting your head or extending your knees without actually lifting your hips off the floor. If you can’t get your hips up and pull your knees to your chest, as shown above, you need to try your luck with Level 3. 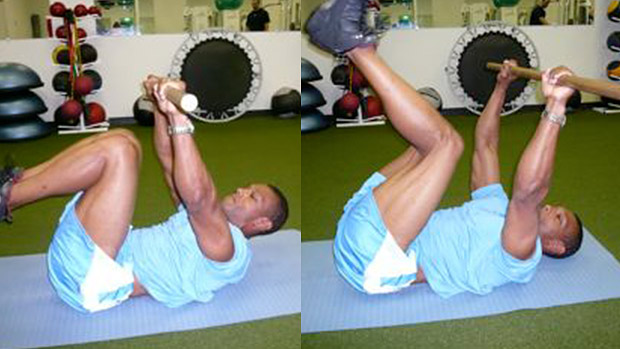 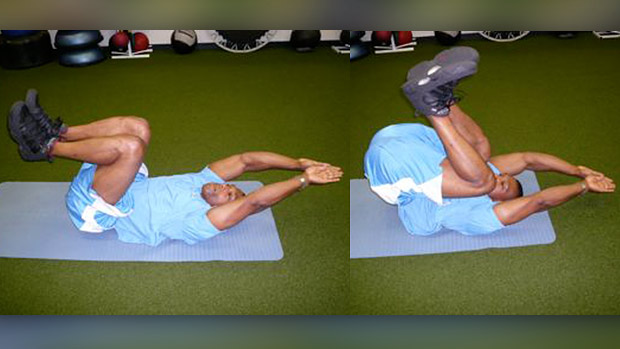 On this one, you need to keep your arms and hands either on the floor or within one inch of it. 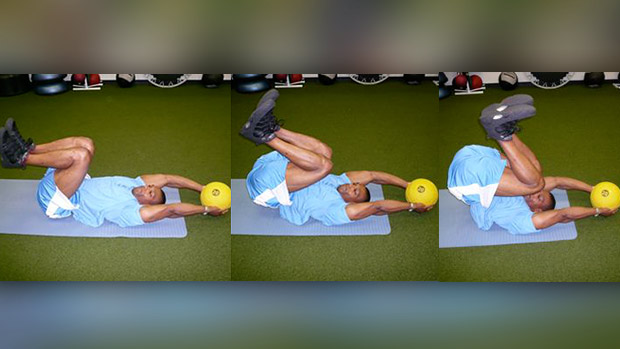 If you’re unable to complete Level 3 with perfect form, repeat the test, this time holding a medicine ball or dumbbell that’s no more than 5 percent of your body weight. So if you weigh 200 pounds, the heaviest weight you can use is 10 pounds.

If Level 2 is a no-go, try it again, this time using an anchor that’s 10 percent of your body weight. So for the 200-pound guy, that’s a 20-pound weight. The heavier the weight, the more your upper-body muscles will assist your obliques and rectus abdominis.

Train with whatever variation allows you to do sets of 10 or more reps. Decrease the load in subsequent workouts until you’re able to do Level 3, the unanchored version.

Then it’s time to take your shot at Level 4.

Now that you’ve tried these tests, you probably realize you have some work to do to bring your core strength up to where it should be. The great thing about these exercises is that you can integrate them easily into your current workouts, and come up with lots of variations to keep them fresh and interesting.

If you’re humbled or embarrassed by your performance on the tests, I can assure you that some very talented athletes and some very strong lifters know exactly what you’re going through.

The tests gave them motivation to bring their mid-body strength up to where it should be, and I hope you follow their example and rise to the challenge. Work hard, and you’ll see big improvements.