By definition, a peak is surrounded by two valleys, which means (despite what athletes always like to tell me), you can't be in peak condition all the time. In fact, "peak condition" is a relatively rare and transitory state.

So if you're tired of the status quo and have a hankering to venture into uncharted territory (i.e., hit a new peak), have a look at the two purportedly Soviet peaking cycles below. I say "purportedly," because during a recent visit with Charlie Francis, he strongly stressed to me the need to be skeptical about any training information which claims to be of Russian or Eastern-Boc origin.

The very moment he conveyed this to me, I noticed three black, unmarked helicopters hovering overhead, so needless to say, I believe him.

Regardless of their origins, however, these two programs are quite nifty and more times than not, deliver the goods in spades.

These programs aren't for your itty-bitty ancillary movements, by the way — they're for big, multi-joint movements such as squats, bench presses, power cleans, deadlifts, chins, and so on. Seasoned lifters can usually expect to add between 2.5 to 5 percent on their 1RM, whereas less experienced trainees should do even better. So here they are, with my comments and suggestions.

This cycle is usually attributed to Dr. Yuri Verkhoshansky, the noted "father of plyometrics" and co-author of the excellent book Supertraining: Special Strength Training for Sporting Excellence (available from MyoDynamics.com).

It's a two-day a week cycle. For this reason, it's a bit hard to do it on a "Monday, Wednesday, Friday" training schedule. I'd suggest training on Monday, Tuesday, Thursday, and Friday, and use Monday and Thursday for the targeted exercise. Use Tuesday and Friday for any remaining exercises that you'd like to include in your training.

For example, if you use the Soviet Peaking Cycle for your back squat, do your upper body exercises on those two days. Day one is the "light" day, and day two is where you experience butterflies in your stomach while driving to the gym.

1) If you choose to use this cycle for cleans, snatches, or deadlifts, I'd recommend that you avoid exceeding 6 reps on any given set. Otherwise, accumulating lower-back fatigue may set you up for an injury. So if, for example, any given set calls for 8 reps, do two sets of 4 instead (for these three movements).

2) The cycle is based on your current 1RM for the lift that you're trying to improve. So you either need to test for this, or estimate. If you estimate, err on the side of being too conservative — you'll thank me later!

3) In the past, I've used this cycle just prior to the Soviet Squat Routine, which we'll cover next, since it has a greater emphasis on hypertrophy. So for example, you might use the above program for your back squat, then take 3 weeks off from the squat altogether (focusing on weak-link muscle groups, whatever they happen to be for you), then embark upon the following Soviet Squat Routine, based upon your 1RM which was generated from the first peaking cycle.

This program has been around for ages, but many of you will be unfamiliar with it. It involves a three day a week schedule for the targeted lift. Sounds like slow suicide, you say? Well, there are a few built-in safeguards as it turns out. Take a look, and I'll meet you at the other end:

For the first three weeks, you'll always use 80 percent of max, but for varying set/rep formats. Then, starting on week four, the intensity goes up.

Throughout the entire six weeks, every other workout is "light." This is what allows the relatively high training frequency. Always train the targeted lift first in the workout while you're still fresh, and then do any other lifts you've planned.

A good format (if you're using this for an upper body lift such as the bench press) is to do your heavy lower-body training on the light (6x2) days, after the targeted lift.

You'll notice an interesting phenomenon as you do this cycle: After one of the "heavy" workouts, you'll go into the 6x2 workout expecting a walk through the park, but lo and behold, it'll feel quite hard, which creates a lot of anxiety about the next "heavy" workout. Not to worry though — you'll get through it with flying colors.

One final note about this program: although the new max is predicted on the very last workout, I find that it often comes as long as 7-10 days after the program's conclusion, after you've layed off the hard work for a bit.

So if you don't hit the jackpot on the 18th workout, plan for 2-3 testing sessions over the following week or two, and you'll get your new max. I'm so sure you'll hit a new max that I'll give you a free Myo Dynamics Saskatchewan sealskin-binding weight belt if you don't.

Think you have what it takes to make it in the world of elite sports? Do you have immense talent and ability? Great, but so do a few thousand other guys. Unfortunately, all of these things will only get you so far in this world where good isn't often good enough. At this level you have to be one of the best just to get your foot in the door.
Training
Charlie Francis October 27 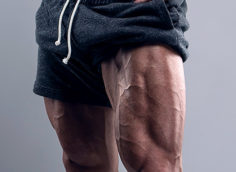 This exercise hits the portion of the quads that gets neglected by regular squats. Bonus: You can do it anywhere.
Training
Gareth Sapstead December 22
It's the sound you never want to hear when weight training. Sometimes you feel it immediately; sometimes you sense something happen but it takes a few hours for the full impact to hit you. Either way you've injured your back. The big question is, what do you do?
Training
Ian King February 4