In my training facility, we coach over 400 clients on a weekly basis. Each client or athlete has their own individualized program designed to get them the best results possible.

In every program we design, from those for our high school, pro, and Olympic-level athletes to our everyday Joes looking to build muscle, we use the Olympic lifts to improve performance.

The Olympic lifts (the snatch, clean, and the jerk) are unbeatable for producing power and developing athleticism. But Olympic lifting requires skill and practice, and in my "training bubble" – where I know the coaching is world-class and the equipment allows it – we develop the necessary skills to Olympic lift as well as any gym in the country.

Unfortunately, few have the opportunity to train at a gym like mine, where there are top-of-the-line bumper plates, excellent bars and platforms, not to mention competent coaching. Most people likely train in a commercial facility that considers these type of amenities to be too "specialized" or God forbid, too "hardcore." Still, that doesn't mean your power development has to suffer.

When you can't Olympic lift, here are some replacements that you can use at any gym.

The barbell power snatch is the most athletic of the Olympic lifts. Moving the bar from the ground to the overhead position in one fluid motion is awesome to watch and helps develop tremendous coordination.

With the power snatch the many benefits of the deadlift are kicked up a few notches. With the increased range of motion and the extreme posterior chain and grip strength required to move the bar quickly from this awkward position, the snatch is like a traditional deadlift on the sauce.

Reasons You Can't Power Snatch at a Commercial Gym

I have power cleaned in a commercial gym before and received some furrowed brows, but I can't imagine the looks of glazed horror I'd get if I were to snatch in the nearest Globo Gym.

To start, most gyms don't have anything remotely close to a bumper plate or a platform, so you'll be left with some serious weight overhead and no safe place to drop it.

Not to mention, the snatch is by far the most technical of the Olympic lifts and requires some serious coaching – something the 19-year-old kid in the golf shirt holding the clipboard likely isn't capable of.

Replace it with: One-Arm Dumbbell Snatch

Replace the power snatch with the one-arm dumbbell snatch. Changing the implement from a barbell to a dumbbell closely replicates the lift while delivering a few extra benefits that the traditional snatch can't give.

By switching implements you'll be challenged not as much by the weight lifted, but by the challenge it places on your core. At the start position (near mid-shin like the power snatch) you have to call on your core to keep you from rotating from center. Once the pull is complete and overhead, you'll need to minimize lateral flexion just as you would in a heavy waiter's walk.

If you can, try doing these with a thick grip dumbbell to get the extra grip training that the wide grip barbell snatch normally provides. I mean, it never hurts to have big ass forearms and a vice-like handshake that will make your father-in-law weep, does it?

If you were a high school athlete within the last 25 years, you likely did power cleans as part of the program. This lift has been shown to produce massive power output and is a big part of a kick-ass weight training program.

There's no other movement that loads the posterior chain and requires as much power to complete as the power clean. If you can do it in your gym, and do it well, you should be adding them to your program for more power.

Reasons You Can't Power Clean at a Commercial Gym

As with the power snatch, you'll be hard-pressed to find a gym where you can freely drop bars to the floor. Lowering the bar to the ground under control will reduce your ability to produce maximal power on the next rep and affect the rest of your sets and reps.

The catch portion of the power clean is dependent on having a great bar that spins well; a $100 barbell from a used sporting goods store is going to drastically slow down your pull under the bar.

The expensive bars that are currently being used in the Olympics allow for the bumper plates to rotate with ease – this makes the transition from "pull up" to "pull under" much easier.

The problem with quality barbells is they're expensive and can be damaged when mishandled, making them a rarer find at big box gyms than squats to depth and decent workout music.

Replace it with: Kettlebell (or Dumbbell) Deadlift Jump

If you can't power clean at your gym, use a kettlebell or dumbbell to do deadlift jumps. This movement replicates the hip-dominant pattern of the power clean, making it a great posterior chain exercise.

Explode upward and extend the hips, leaping into the air, and on the way down make sure to move the 'bell back between your heels so that each rep works the backside.

This exercise requires less skill, so it's an excellent replacement for people who can't yet do the power clean

If you have a solid hip-hinge pattern in place, then moving up to the trap bar is a good way to elevate this movement to the next level. As Bret Contreras mentioned in The Contreras Files: Volume II, they can replicate the power output of traditional Olympic lifts.

Note: You must have a solid hip hinge pattern in place. If you don't, you'll just pound on your knees until your patellas pop out and spear some crusty attorney stretching his hamstrings dead-smack in the eye (landing you an injury lawsuit for good measure). Seriously though, a bonus of the power clean is the load on the posterior chain early in the lift; without the hinge pattern, don't bother with the trap bar.

The jerk is the most powerful quad-dominant exercise at our disposal. It's my secret weapon when it comes to training basketball players to jump higher and can take your power game to the next level.

The power outputs of the jerk actually dwarf those of the clean and snatch. It gets a bad rap because plenty of people are scared to go overhead, but if you know how to do it right you should definitely include it in your program.

Add the split stance and you have one of the coolest and most athletic lifts in the gym.

Reasons You Can't Jerk at a Commercial Gym

You can bring a bar back down to your shoulders after each jerk, but doing anything more than two reps with a significant amount of weight gets pretty freaking ridiculous. Doing so ends up taxing your shoulders from the eccentric load of lowering before you can get enough power work in.

The answer to that problem of course is a nice set of jerk blocks, but show me where Planet Fitness stashes the jerk blocks and I'll show you how to down three pizzas and a case of Heineken a day and get shredded.

Replace it with: Squat Jump

To replicate the quad-dominant pattern, the simple replacement is to use a barbell squat jump. This movement won't earn you scowls at the gym, and will still develop serious explosive strength in your lower body.

Replicate the traditional Olympic lifter stance with your set up and explode upward, leaving the ground.

The idea isn't to pound on your joints but to develop serious concentric power in hip and knee extension. Maintain good position as you dip down (all the usual, hips back, knees not over toes), but don't hit the bottom position – change directions at parallel or just above to maintain the potential energy you're creating in your lower body.

If your squat jumps get a little sloppy, a great fix is to do the halting squat jump. Lower at the normal pace, pause for three seconds in the bottom position, and explode upward. By holding the bottom position you can maintain a measure of control over the quality of the movement (even with my best athletes we rarely go over 185 pounds) and still get great power-production.

Want to get the single-leg bonus and the athletic stance thing down? Well, once you're comfortable doing squat jumps, the split squat jump is a great progression.

From the bottom of a 90-90 split squat position, explode up and land with your opposite foot forward, control the descent, and repeat. This movement nails the offset loading pattern like the jerk to a T.

Training at a Globo Gym can be a soul sucking endeavor, but don't let crappy gym policies come between you and your goals. Next time you're in your commercial gym, try knocking out these replacements for traditional Olympic lifts for greater power.

Now nothing can stop you from becoming a powerful beast, not even the staff at Globo Gym. 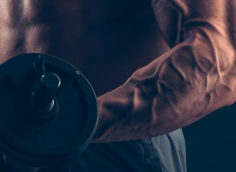 Squats or leg presses? Barbell or Hammer machine? The right answer depends on what you want to get out of your workouts.
Bodybuilding, Training
Tim Henriques February 18