Calves are a sensitive issue for a lot of bodybuilders.

While most stubborn bodyparts can be overcome with the right mix of hard work and dedication, calves are an entirely different animal. They’re stubborn. Often, they won’t respond. Hell, they don’t even listen, and continually leave the seat up when it would take just a millisecond to put the damn thing back down.

Even normal folks who rarely set foot in a gym often have calve insecurities. Reports are now saying that on the night of his bizarre traffic mishap, it was the ill-timed comment “What’s the Swedish word for ‘cankles’, honey?” that earned an intoxicated, philandering Tiger Woods a titanium 9-iron right in the pucker.

Savvy bodybuilding coaches will tell you that the surest way to build Olympia level calves is to either choose the right parents or weigh 400 pounds. But if neither option seems particularly practical right now, you’re in luck. We challenged some of our brightest trainers and physique coaches to come up with a few sure-fire ways to build big calves, fast. The catch was, they only had 140 words, max.

I can’t take it anymore! Gimme a routine that will get these pathetic calves to grow!

The key to better calf training isn’t so much in the routine, as it is with how you perform the reps!

The calves can be very elastic in nature; in other words, you rebound quickly in the bottom to take advantage of tendon strength versus muscular strength. To negate this, try holding for two full seconds at the bottom of every rep. No bouncing, no cheating; just maintain that bottom position for a full two-seconds.

Try 2 sets of 15 to 20 on both the seated and standing calf raise machine. The seated version will hit the soleus, while the standing version targets the gastrocnemius. Paired with that two-second pause, I can virtually guarantee you’ll be crippled in the coming days!

Focus on these three things to get your calves growing again:

I mainly prefer straight-leg calf exercises, to put the emphasis on the gastrocnemius (the main “show” muscle of the calf). Donkey calf raises and “toe presses” on a leg press machine are preferred, as they don’t put as much pressure on the lower back.

Sample routine:
Donkey Calf Raises 1 to 3 sets, 10 to 12 reps each, with a slow negative and a pause in the deep stretch position. Add 5 or 10 pounds every time you repeat this workout. 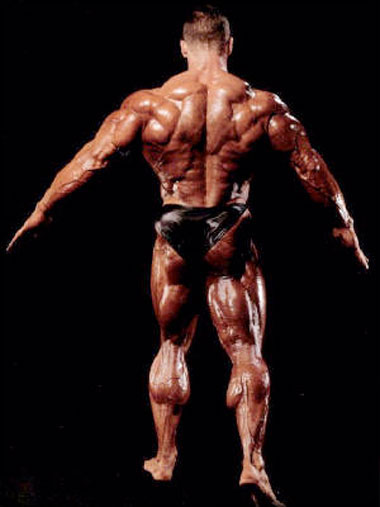 After finishing a set of the A1 exercise, proceed immediately to exercise A2. Then rest two minutes before repeating the super set.

* * In other words, you’ll be doing one, long, extended set, resting ten seconds between each mini-set and lowering the weight in between.

It worked in the late ’90s, and it will work today.

Buy a pair of low-top thin-soled racing shoes made by Adidas or Puma. If you’re really adventurous, buy a pair of Vibram five-finger shoes. These shoes will cause the muscles of the feet to work harder, which will increase foot strength and increase ankle stability, allowing for better recruitment of the gastrocnemius and soleus during calf exercises.

In your fancy new shoes, train calves three times per week at the beginning of your workouts.

Perform a partial squat and come up onto your toes. Repeat in a rhythmic tempo.

Do this for 3 weeks and then change the routine.

Step 2: When you do train calves, superset all sets with one leg standing calf raises using triple sets (first set to failure – no rest, repeat; for a total of 3 sets). If you can do more than 30 on the first set, grab a dumbbell.

If you have a garage gym, load a heavy barbell onto your shoulders and walk up and down the driveway on your toes without letting your heels touch down. Do 4 sets and aim for 120 steps per set. Works great, and hits the core musculature at the same time. Follow these up with two sets of bodyweight single leg calf raises for 20-30 reps.

Finally, get strong on squats and deadlifts. Have you ever seen the calves on Jim Wendler?

That’s it for this round. Until next time- keep tweeting!