What's the Best Number of Sets for Strength?

Anyhow, what I've noticed is that lifters almost universally believe that the more you do, volume-wise, the faster you'll develop the muscle mass of a mountain gorilla. They're the people you see at the gym when you work out at 5 PM and then see again at 7:30 PM when you go back to see if anyone turned in your lost keys.

Poor misguided bastards, because a joint team of researchers from the University of Tampa and the University of Sao Paulo proved what many of us already know: more is not always better. To be precise, they found that when it comes to squats or probably lower-body training in general, doing just 18 sets a week makes you significantly stronger than doing 24 sets.

Researchers are always monkeying around with training variables like intensity, rep tempo, and exercise selection, but probably no variable has received as much attention as volume – usually defined in these studies as the number of sets performed per muscle group per week.

Unfazed by previous inconclusive results, the Tampa/Sao Paolo group recruited 35 weight-training experienced men between the ages of 18 and 35 to determine the effects of volume on muscle strength, along with its effects on strength-endurance and muscle mass/thickness.

The men were split into three groups. All three trained twice a day using squats for eight weeks. The first group performed a total of 12 sets a week, the second performed 18 sets a week, and the third group ground out 24 sets a week.

Surprisingly, all three groups grew pretty much the same amount of muscle, but the 18-set per week group got a lot stronger than the other two groups:

Surprisingly, the group that did the most work got the least results, at least strength-wise.

The other surprise? Despite their big improvements in strength, the 18-set per week group, unlike the other two groups, failed to increase muscular endurance – the number of reps to failure using 70% of 1RM. The researchers were at a loss to account for that seemingly screwy result.

Rather than ape some of the previous studies and possibly come to the same ambiguous conclusions they had regarding the effects of volume on trained individuals, the Tampa/Sao Paolo group looked at something other researchers hadn't: The number of sets trainees were doing before they began participating in a research study.

So, any training-induced changes seen in such a study might occur because of sudden changes in the subjects' training program, e.g., the increased/decreased amount of volume they were about to adopt. But the savvy authors of the current trial accounted for that: They took previous training history into consideration and found that, on average, the subjects had been performing about 13.2 sets per muscle group per week before the study began.

Consequently, they arranged it so that their randomization procedure assured similar baseline volumes between groups, which makes a whole lot of sense and maybe earns this study a little more plausibility than similar ones.

"Although maximum strength significantly increased in all experimental groups, strength and conditioning professionals, as well as practitioners aiming at improving their 1RM squat, should consider performing the middle dose range (e.g., 18 weekly sets) as we observed the largest effects."

So said the authors.

Okay, so maybe they wouldn't get a passing grade in Mrs. Cormorant's English comp class. If we dissect their tortured prose, though, we can see that more isn't necessarily better for building lower-body strength.

The same, it seems, applies to hypertrophy. This study revealed no "Goldilocks zone"; all three protocols worked pretty much the same. Still, it gives further evidence that those primates who hang around the gym for lengthy periods are doing so either for therapy or because they're not the smartest banana in the bunch.

This is a great exercise, and it's even better if you learn how to do it with heavy loads. Here's what you need to know.
Chest, Exercise Coaching, Tips
Nick Tumminello December 13

For most people, the upright row is a shoulder wrecker. Here's a better exercise.
Tips, Training
Dr John Rusin October 22 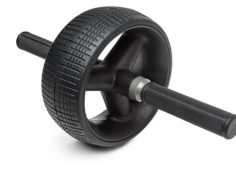 It's one of the toughest core exercises. Here's how to master it and reap the benefits.
Abs, Tips, Training
Drew Murphy October 20
Ah, the elusive art of abs. These days, the "lift shirt and crunch" has replaced flexed biceps as the choice method for proving that you are, indeed, a studly man-beast. Despite this latest "muscle of the moment" craze, Americans are getting fatter. Want to know the secret reason? Okay, I'll tell you...but this is just between you and me, deal?
Training
Chris Shugart March 17