Even if you can squat a lot of weight, you probably have technique issues. Most people have poor squat mechanics, often doing something that resembles a good morning more than a squat.

Their hips shoot up first out of the hole (from the bottom) making their torso bend forward, which overloads the back more than the legs. Some lifters also shift their bodyweight to one side or twist their hips. Then there's the problem of "squatting soft." Many lifters unrack the bar and then fail to create whole body tension.

Instead of chasing numbers, first optimize your squat mechanics and body rigidity. You can do that by learning the dead-start Frankenstein squat. It's a front squat where you don't use your hands, and you start the lift from the bottom position.

What's it good for? Several things:

What Do I Need to Avoid?

Low reps are best. The two most effective methods are clusters and 3/2/1 waves.

Clusters are a perfect fit because they allow you to stand up between reps, reset properly, and start every rep from a good position. It also happens to be the most effective method to build strength in the intermediate and advanced lifter.

A cluster is a set in which all the reps are separated by a brief rest period. Normally we're talking about 10 to 20 seconds. This pause lets you to recover a bit between reps, allowing you to hit a few more reps with a specific weight. This causes greater fatigue in the muscle fibers, an important growth stimulus.

Clusters are also effective because they give you a lot of "first reps." When you do a big lift, the first rep is pretty much always harder than the second and even third rep (unless you're in the 92-100% range). A lot of people rely on the first rep to get everything right, but if you're a powerlifter or weightlifter you only have that first rep, so you want to be efficient. Clusters make every rep a "first rep" because you reset and set-up before every repetition.

Five or 6 reps work best. That would mean using a weight you could normally lift about 3 times in a regular set. Three to five sets of 5 to 6 reps works well.

This method builds limit strength and some size. It relies on 2-4 "waves" of 3 sets each. A set of 3 reps is followed by a heavier set of 2 reps and then by a final single rep.

If you successfully complete all reps in the wave, you start a new wave that's heavier. Normally the new wave's set of 3 uses the same weight you used for the previous wave's set of 2 reps. You stop when you can't complete a set, or know there's no way you'll get the next set completed.

Normally, the first wave is fairly conservative. The second wave is challenging but doable. Completing a third wave would have you lift a weight close to your 1RM. Completing 4 waves should be extremely rare and would lead you to a PR in the lift.

Here's an example of what a wave look like, assuming a 365-pound 1RM.

As soon as you fail to make a rep or have a significant technical breakdown, stop and move on to the next exercise.

When Should I Use Dead-Start Frankenstein Squats?

It's best used as an assistance exercise for the front squat, back squat, or deadlift. It has a significant impact on all three of these lifts, so it could be done as a secondary movement right after finishing the main lift. For example:

If you train your squat twice a week, it can also be used as your main lift in a workout. In that case, the actual squat would be trained in the first session and the Frankenstein would be your main lift in your second squat workout.

It can also be a great way to teach the squat to a beginner since most of them have a hard time staying upright and keeping the core tight. Doing 3 sets of 5 reps, 2-3 times a week with moderate weights, will greatly improve form.

Whether you're a beginner or veteran, be patient. It takes about three sessions to become comfortable with this lift. 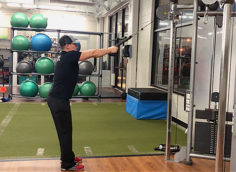 These four finishers will strip off body fat, set your lungs on fire and help you keep on fighting.
Conditioning Finishers, Fat Loss Training, Metcon, Training
Eric Johnson & Ryan Johnson September 16
Get your hips, T-spine, and shoulders ready for the big weights with this simple drill.
It Hurts Fix It, Training
Lee Boyce November 2