Recently, a jiu-jitsu fighter came to my strength and conditioning class at the Rickson Gracie Center in Los Angeles. This guy's also a powerlifter, and damn proud of it. Before the class, he took it upon himself to tell me how much he could lift. At the top of his list is a raw parallel squat with two and a half times his bodyweight. Guys like to brag. It's in our nature. All that Testosterone, you know.

Anyway, it was odd that he mentioned his powerlifting numbers since he knew that I was already familiar with what he could lift. I've seen him train at Gold's Gym in Venice many times and we've talked shop on a few occasions. In fact, that's how he happened to be in my class that day: I had invited him.

When he showed up for my class his first question was, "where are the weights?" I told him that all of the weights had been stolen by a band of iron thieves. I was kidding, of course. "Believe me," I told him, "you wouldn't want to do these exercises with extra weight."

Actually, we do use stuff like heavy sandbags, dumbbells, kettlebells, and resistance bands in the class, but I hadn't brought them out yet. And you know what? It didn't matter anyway, because he couldn't even make it through the first fifteen minutes of bodyweight exercises before he threw in the towel.

He promised to return when he was in better shape, but that was months ago, and I haven't seen him since. Go figure.

My point is that bodyweight exercises can be damn tough. This is good news for anyone who doesn't have access to a gym and wants to train more often, or just wants a change of pace. And it's even better news for your joints.

I've talked about keeping your sets less than fifteen seconds for maximum motor unit recruitment. And I'm often telling people to lift heavy. But when I say heavy what I really mean is challenging. You don't need a lot of iron on the bar, if any, to get an awesome workout, provided you know what you're doing.

If you can't perform certain bodyweight exercises for more than fifteen seconds, there's no reason to perform the same basic movement with additional load. A guy who can't do twenty push-ups has no business doing barbell bench presses. Don't get me wrong, fifteen seconds isn't the limit for bodyweight exercises, especially when higher levels of anaerobic endurance is the goal. But it's a good start.

The powerlifter I mentioned could perform a raw, parallel squat with 580 pounds, but he couldn't do one single-leg squat in my class. In my world, we call that weak, not strong.

How's it possible for a guy with a big squat to fail at one single-leg squat? The human body is really good at compensating for underlying weaknesses. Big prime movers such as the low back and hamstrings take over, while the glutes and outer hip muscles sit on the sideline. When a coach or fellow lifter sees a guy knock out an impressive squat or deadlift, they assume that the guy must be strong. Maybe so, but he might not be strong in the muscles that need it most.

The real test comes when you challenge the lower body muscles with a movement that challenges mobility and stability strength. If a guy can squat two and a half times his bodyweight, I want to see how many single-leg squats he can do with perfect form. If everything is up to par, he should be able knock off six reps while holding 25% of his bodyweight. Very few avid lifters can do it, and they have the stiffness and joint pain to prove it.

In my experience, it's much easier to develop a big Olympic lift or powerlift if a guy has sufficient mobility. This is akin to the idea that it's easier to make a fast guy strong than it is to make a strong guy fast.

Try out the following bodyweight exercises. Once you achieve the goals for each exercise, you're free to return to more traditional barbell exercises. You'll be amazed how quickly you'll boost your deadlift, squat, snatch, or any other lift once you free up your joints and get the right muscles firing again.

At the top of my list of bodyweight exercises for the legs is the single-leg squat. It enhances ankle, knee, and hip mobility and stability strength. But this is one tough mother of an exercise so I usually test people first with the modified version.

Goal: Perform ten reps with each leg before you attempt the single-leg squat.

If you can't perform ten reps of the modified version, perform three sets of as many reps as possible three times each week. Once you reach ten reps for each leg, move on to the more difficult version.

Description: Stand on your right leg with your arms out in front and your left leg held in front slightly. Push your hips back and drop into a full squat while keeping your torso as vertical as possible. Your heel should not come off the ground. If it does come up, stretch your calves. Repeat with the left leg.

Goal: Perform ten reps with each leg with perfect form. Once you reach that goal, return to barbell front and back squats, and relish the ease in which you reach the bottom position.

Core strength is essential to overall power and health. Unfortunately, most people waste their time with non-functional abdominal exercises. The hand walkout builds core strength as well as anything you'll find, and there are two added benefits that most core exercises can't offer.

Just like the single-leg squat, there are two versions of the hand walkout. The first version is with the knees down.

Description: Start on all fours with your hands shoulder width apart and at eye level. Walk your hands forward while keeping your arms straight. Continue as far as possible before walking your hands back to the starting position. That's one rep. Don't let your hips and stomach sag as you walk your hands out. If you can reach the fully outstretched position, your stomach should not be touching the floor (if it does touch you need to lose that gut).

Goal: Perform ten reps with each rep ending in the fully outstretched position.

Once you can perform ten reps with your knees down, you're ready for the advanced version. You'll perform the same basic movement except you'll start with your legs straight and knees up (the starting position of a push-up, as shown below).

Description: Walk your hands out while keeping your legs straight and knees off the ground. I guarantee that it's probably the most difficult core exercise you've ever tried. Few can do it, and even fewer can do more than one.

Goal: Perform five reps with your legs straight and knees off the ground. There really is no progression after this advanced version. You'd be hard pressed to find another anterior core exercise that comes close in terms of difficulty and results. Focus on adding more reps over time, if you feel the need.

I'm shocked by the number of athletes who lack the ankle, knee, and hip stability strength to stand on one leg for more than ten seconds. And once they are cued to shift their torso forward, things get really ugly. This is especially true with jiu-jitsu fighters and wrestlers, since they spend so much time on the ground.

This exercise isn't as challenging to overall strength as the single-leg squat and hand walkout, but it's just as important. Once you perfect the inverted hamstring stretch, you'll have more hip mobility to go along with your stability strength. The proper technique is paramount. Anything short of perfect and you won't derive noticeable benefits.

Here's how it looks.

Description: Start with your feet shoulder width and your arms out to the sides with your thumbs up. Your shoulder blades should be pulled together. Push your hips back and shift your torso forward while extending your left leg straight back until it's parallel to the ground.

Keep a slight arch in your low back as you shift forward in order to put a greater stretch on your hamstrings. Squeeze your right glute as you return to the starting position. This move should be relatively slow and under perfect control.

Goal: Perform 15 perfect reps with each leg. The newfound stability strength and mobility will carry over well to all deadlift and squat variations.

Your goal should be to achieve the recommended number of reps for each exercise. Once you accomplish it, perform one or two sets of each exercise at the beginning of your weight training workouts. They serve as a perfect warm-up that activates your muscles by enhancing neural transmission.

Another great benefit of these bodyweight exercises is that they can be performed anywhere. Instead of wasting your time on a treadmill, spend 15-20 minutes cycling through these exercises for three workouts per week.

Don't let the lack of additional load fool you into thinking that these exercises aren't beneficial. I guarantee you'll feel and look better once you master them.

If your traps don't impair your hearing, they're not big enough. Okay, maybe not. But try these shrug exercises anyway to get them bigger.
Bodybuilding, Exercise Coaching
Merrick Lincoln, DPT December 21 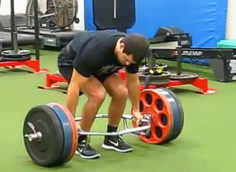 Murder your legs with this variation. Do 1-2 sets of 8-10 reps at the end of leg day.
Deadlift, Exercise Coaching, Powerlifting & Strength, Tips
Ben Bruno August 1