Adopting a whole new training program is a great way to stimulate new muscle growth. But sometimes it's helpful to just learn a few new movements without having to drastically change your whole routine. So with that in mind, here are six good exercises from my toolbox you may want to try out in the coming weeks.

You must understand one thing: your body is built for survival, not to be balanced and aesthetically pleasing. When you're lifting weights you're stimulating the muscles to grow larger and stronger. This is an adaptive response to physical work.

However, just doing an exercise doesn't guarantee that you'll be stimulating growth in the muscle you want to maximize. Your body is built for survival. When doing a bench press it doesn't know that your goal is to build a big chest. All it knows is that a big ass weight is trying to crush you and if you don't lift it you'll die.

So in the interest of your physical integrity and survival, your body will use the muscles better suited to get you out of this menacing situation. If your triceps or deltoids are overpowering your chest, then your chest might not get fully stimulated from the bench press since the nervous system will "shift" more of the workload onto the overpowering muscle(s). This is why some guys get a big chest simply by bench pressing while others build nothing but triceps or shoulders.

Just because you're doing what's traditionally known as a "chest exercise" doesn't mean that you'll be stimulating maximal pectoral growth. Sometimes you have to force your body to use the muscle you want to stimulate. This is what the "squeeze press" does.

It's a dumbbell bench press movement with one slight difference: the dumbbells are kept in contact with each other at all times and you're actively squeezing them inward (against each other) as hard as possible. This simple action will shift all the stress onto the pectorals.

It's very important to understand this point: you should squeeze in the dumbbells as hard as possible during every inch of every single rep. This is what makes this exercise effective.

You can use either variation pictured below. In the first, you need to use hex dumbbells and keep the palms facing each other. I find this variation to be easier on the wrists and to work the sternal portion of the pecs to a greater extent. 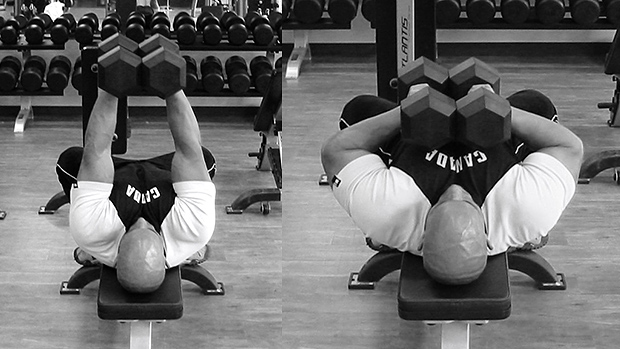 The second version (thumbs facing each other) puts a bit more strain on the wrists but activates the upper/clavicular portion of the chest more effectively. 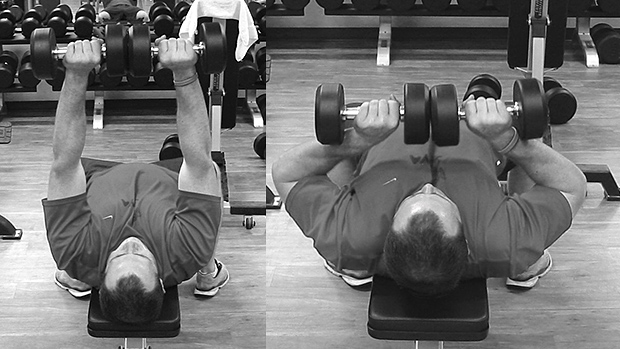 This is basically a combo of a shoulder press and a lateral raise. 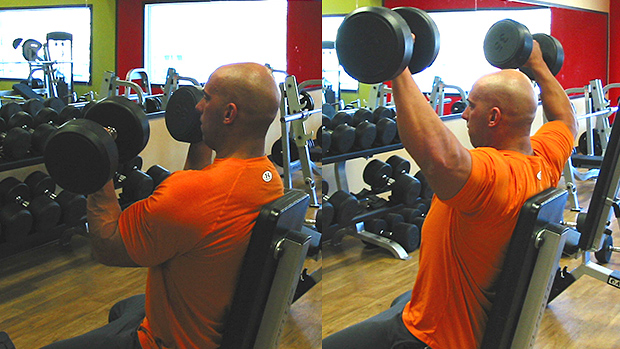 You start the movement like an Arnold press, arms in front of you, using a supinated grip (palms facing you). Start to press the dumbbells outward and up as in a regular Arnold press, but as the elbows reach the height of the shoulders you begin to raise them higher while "pressing" the dumbbells farther outward (basically "unfolding" the arms).

The end position is similar to that of a lateral raise. The hands are about as high as the top of the head and the palms are facing downward at a 45-degree angle. Reverse the motion to get you back to the starting position.

I wrote an article a while back that described the overhead shrug – basically holding a barbell overhead and shrugging up your shoulders.

Olympic lifters have great traps because they pull heavy weights, but also because they must hold heavy weights overhead by contracting their traps. I recently found a movement that's even better at fully stimulating the traps: the overhead dumbbell shrug!

Simply start the weigh with your arms parallel to the floor, thumbs facing upward. From that position, contract your traps to raise the shoulders and lift your arms upward at the same time. Hold the fully contracted position for 2-3 seconds and go back down. 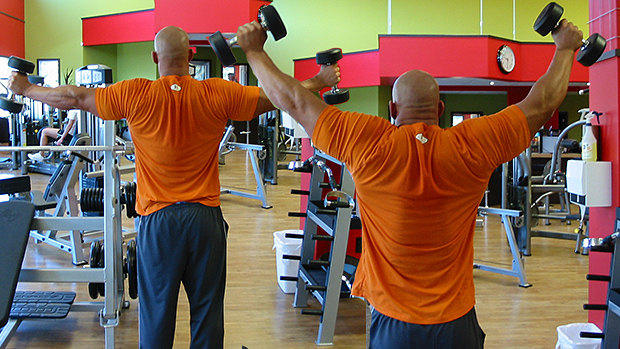 You won't need a lot of weight for these; five to fifteen pound dumbbells should do it! I find it especially effective when used in a superset with either a heavy shrug or a power clean/clean pull.

This is a good shoulder power movement. It also involves the lower back and hamstrings a lot, but still places a lot of stress on the deltoid.

In that regard, it's much like a push press/push jerk: you can use a lot of lower back and hips action, which will take some stimulation off the deltoids, or you can only use a slight lower back/hips "kick" to get you started. To build great shoulders, focus on lifting the weight mostly with the arms. 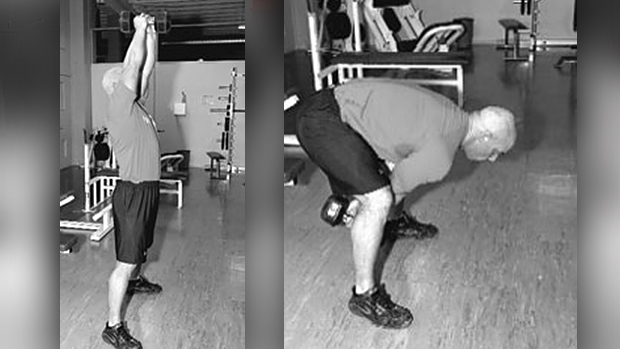 Note that a single arm version of the movement exists and is often prescribed by some coaches. The problem with this is that since you'll be using less weight, it's much harder to reduce hips/lower back involvement. When using a lighter load (because you're only using one limb), it's true that the load on the arm is still high; however, both sides of the lower back, glutes, and legs are still involved, not just one side.

If you want to use the single arm version to build your shoulders, you'll have to really scale down the involvement of the lower back and hips.

What I like about the incline version of the lateral raise is that you absolutely can't cheat, which is a plus, but you can also get a better deltoid stretch at the bottom of the movement which helps with fast-twitch motor unit recruitment. 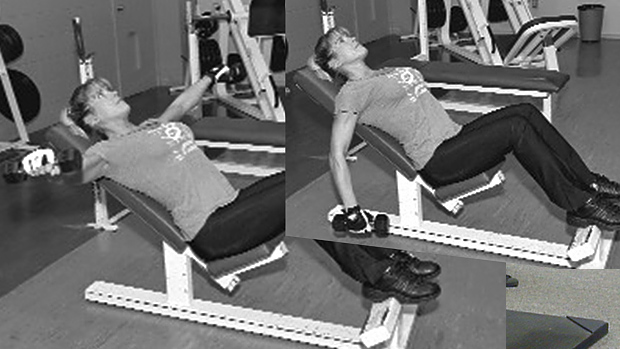 The downside is that, although it's a lateral head dominant exercise, the anterior portion of the deltoid will also be involved quite a bit due to the angle of the trunk. Note that you should make an effort to keep the back end of the dumbbell at least as high as the front end to maximize lateral head recruitment.

6 – The Muscle Clean and Push Press

This exercises is the Cadillac of deltoid exercises! It's a two-part movement. First, clean the weight starting from the hang position (bar hanging slightly above the knees) up to the shoulders. A clean is called an épaulé in French, which can be translated to "shouldering" or "bringing to the shoulders."

Use only a slight leg action to help get the bar on its way while the arms do most of the work. 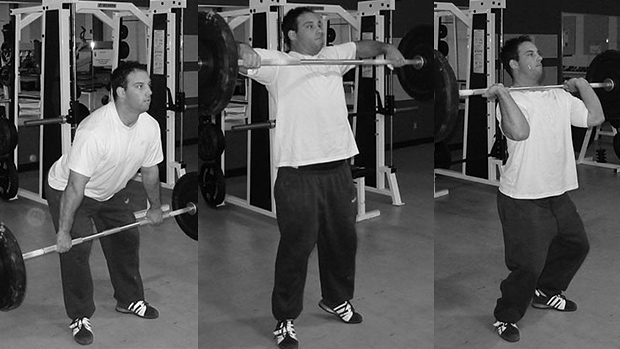 So, start off by "shouldering" the bar, lifting it from the knees up to the shoulders using a slight leg drive and a strong arm action. Remember, keep the bar close to your body!

Once the bar has been lifted to the shoulders, execute the second part of the movement: the push press. Lift the bar from shoulders to overhead using a small leg drive and a strong arm action. Lower the bar back down to your shoulders, then to your knees and start the next rep. 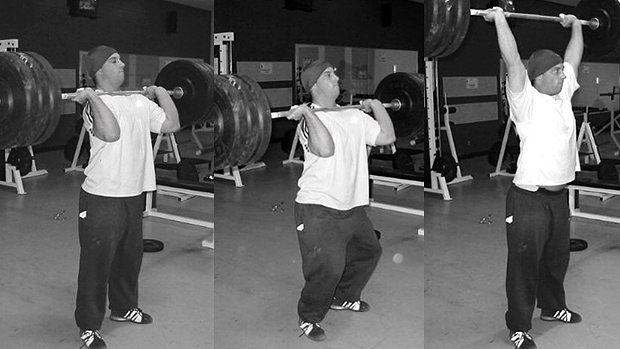 This is the best exercise for adding overall size to your deltoids. It'll also stimulate your traps, so it's a complete "power look" movement! If you could only perform one deltoid exercises, this one should be it!

These exercises all offer something special: from being a specialized isolation exercise (squeeze press) to being an all-around size, strength, and power builder (muscle clean and push press). When properly used, they can be a tremendous addition to your own program.

As always, my intent here is to add more tools to your toolbox so you can use these movements as needed. Chances are some of these will become staples in your programs while others will never be part of them. But keep these exercises in store regardless. You never know when you might need them!

By now, you should have at least tried the leg workout that I described in Part 1 of this article posted last week. If all is well, you should be feeling really bad because your legs hurt so much.
Training
Ian King September 24

This new Q & A column is about building a muscular and aesthetic physique. It's not about breaking strength records or reaching speed and power personal bests.
Bodybuilding, Training
Christian Thibaudeau January 23

Get better results with the RDL and good morning by lifting the front of your feet on a plate. Here's why and how to do it.
Tips, Training
Christian Thibaudeau January 20

New to deadlifting or just getting back into it? Here's the smart way to prepare your body in just four workouts
Tips, Training
Lee Boyce November 4