I'm a strong advocate of single-leg training for athletes. I consider them superior to their bilateral counterparts, and my years spent training countless athletes have reinforced my position.

Some of my colleagues have suggested that coaches who push single-leg movements only do so to be controversial. I can assure you this is not the case. We use single-leg exercises because they're safer, deliver outstanding results, and make sense for athletes. It's nothing controversial. It's logical, old school wisdom.

Check out the page from a 1922 issue of Strength magazine. 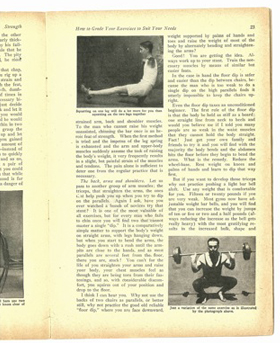 You may not be able to read the fine print; the top caption says, "Squatting on one leg will do more for you than squatting on the two legs together."

Interestingly, the bottom caption says, "Just a variation of the same exercise as illustrated by the photo above." So in 1922, the bilateral squat was "just a variation" of the single-leg squat.

The exercises didn't evolve, but the industry did.

We grew up in a strength and conditioning world dominated by bodybuilders, powerlifters, and Olympic lifters – all lifters for whom double-leg training makes perfect sense. Team sport athletes are not the same as strength-sport athletes, not by a long shot. So why argue that they should train the same?

If you're an athlete or are involved in training them, it behooves you to drop the bodybuilding and powerlifting emphasis and start targeting the athlete's true needs. Incorporating single-leg movements in place of bilateral movements is a great place to start.

This is our base unilateral exercise. My colleague Eric Cressey used an elevated platform and an offset load in his own Top Five Single Leg Exercises article. I prefer an 18" bench or a specially designed stand, performed to a light touch on an Airex pad.

This is not a Bulgarian lunge. I've said it before and I'll say it again, the whole "Bulgarian" thing was based on the word of one coach, and the exercise isn't a even a lunge. In a lunge, you move. This is a split squat – the feet never leave the ground.

The preferred loading is referred to as suitcase loading (dumbbells held in both hands, at the sides). This is a great exercise that's easy to do and can be safely loaded to the extreme. A few weeks ago I had six athletes use a pair of 95-pound dumbbells for 20 reps on each leg.

I love to perform this exercise with kettlebells – it just feels better. In this clip, MBSC coach Ben Bruno does an amazing 305 pounds for 5 (90-pound dumbbells plus 125 pounds in vests).

A note about the bilateral deficit. There's research suggesting we're naturally stronger unilaterally. Our new lower body case studies support this conclusion. It appears that the body finds the attempts at bilateral contractions neurologically confusing. In other words, it's harder for the brain when you lift on two legs.

If you think you have a strong posterior chain, or if you think the bilateral deficit doesn't exist, take a look at this clip of Max Shank of Ambition Athletics doing 315 pounds for 5 with one leg.

Many of my critics have said that the bilateral deficit is a myth and that the back leg in the rear-foot elevated split squat is doing a large percentage of the work. This video clearly establishes the bilateral deficit. If you double his single-leg load, Max would be doing a 630x5 straight leg deadlift, but Max can't do a 600-pound single in the conventional deadlift. Case closed.

If you're looking for a great exercise for athletes, this is it. The one-leg squat demonstrates true single-leg strength, and our athletes are capable of using more than 100 pounds in this lift. I particularly love this for female athletes and ACL injury prevention.

The hardest part of the one leg squat is loading the exercise. We use a combination of dumbbells and weight vests to get the proper load.

In this clip, former New Jersey Devil Jay Pandolfo does 90 pounds for 5.

The slideboard or Valslide lunge is another great single-leg exercise, and the best part is that you get the flexibility work of a lunge with a very strong posterior chain component. If I have personal training clients and can only do one lower body exercise, this is often my first choice.

The slideboard or Valslide lunge is a "pulling" exercise that targets the posterior chain but looks very much like a lunge – think of them as walking lunges performed in place. This is a great exercise for offset loading to increase glute contribution. Kettlebells also work very well.

The one-leg deadlift is especially good for those unable to deadlift due to back concerns. Many might look at this exercise and think that it's a one-leg squat, however, the combination of the load in the hands and the slightly angled trunk clearly makes this a deadlift.

Loading is accomplished first in an offset manner – start by using plates, provided you've access to Irongrip plates that allow you to grab the rim. I like a cross body reach to again create greater glute recruitment.

Some believe in the bilateral deficit, others prefer to ignore the obvious and keep their heads buried in the chalk stand. It doesn't matter – the power of single-leg training is undeniable.

If you're an athlete looking to improve performance or a bodybuilder hoping to build some huge wheels, unilateral training is the answer. It's a true back to the future idea that helps lifters get bigger, stronger, and more athletic, safely. What's not to love? 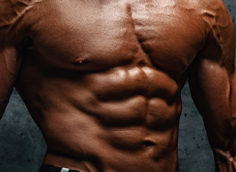 Mechanical drop sets build a ton of muscle. Bonus: They're a great way to increase intensity when you work out at home.
Training
Tom MacCormick May 7