Whenever my clients ask about muscle imbalances, I jokingly tell them I suffer from them too: I have one strong arm… and one really strong arm!

It’s true, though, a person’s dominant side is almost always going to be stronger than their non-dominant side. That means right-handed people are more likely to have weaker left arms.

Though some degree of muscular imbalance is inevitable, having a side that’s a little stronger won’t matter much if you have enough strength on your weak, or less strong, side. However, you can and should do your best to keep your muscular imbalances from becoming too exaggerated because…

Here are some exercises that’ll help you balance things out:

Have you ever noticed how most people at the gym do one-arm rows, but hardly anybody does one-arm lat pulldowns?

It’s a shame because the one-arm pulldown is a fantastic exercise to help eradicate left/right pulling imbalances. Even if you do lots of pull-ups and standard two-arm pulldowns, there’s a good chance that you’re relying on your dominant arm to do the majority of the work.

By simply swapping the long bar out for an individual handle, you can work one arm at a time and begin to help your less strong side catch up.

Single-arm pull-ups are also a fantastic way to get yourself evened out. You can start by practicing one-arm hangs as I described in The Ultimate Grip Strength Test and then eventually work your way up to training for a one-arm pull-up.

Even if someone’s a little stronger on one side, anyone who’s capable of a full one-arm pull-up using either arm is extremely strong on both sides of the body.

Doing barbell presses all the time won’t remedy pushing imbalances. That’s where this exercise come in. Yes, you’ll have to use less weight than you would if you were doing a barbell press, but if you’re willing to put your ego aside in the short term, it’ll have a bigger payoff in the long run. 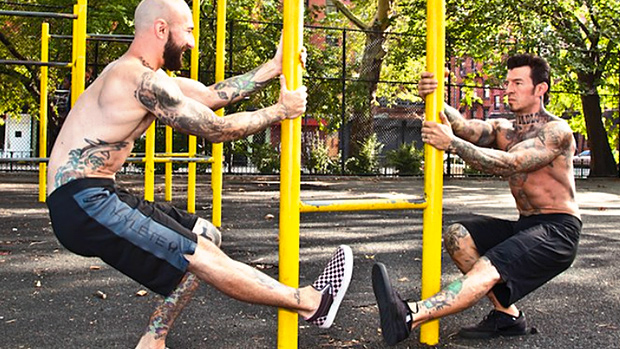 It may seem counterintuitive at first, but oftentimes in sports and other activities we post off of our left leg in order to use our right arm (and vice versa). Think of a pitcher in baseball or a boxer throwing a cross. These contra-lateral movements often produce better development in the leg that’s opposite the primary arm.

Single-leg squats are the answer to evening out your lower body imbalances, even though the strongest lifters are often humbled by attempting an unloaded, full ROM one-legged squat.

Since not everyone’s strong enough to perform a proper one-legged squat, you can practice them with an assist from your arms by holding onto a suspension trainer or a vertical pole. Just make sure you aren’t doing too much of the work with your arms – they’re only there to give the squatting leg just enough help to complete each rep. 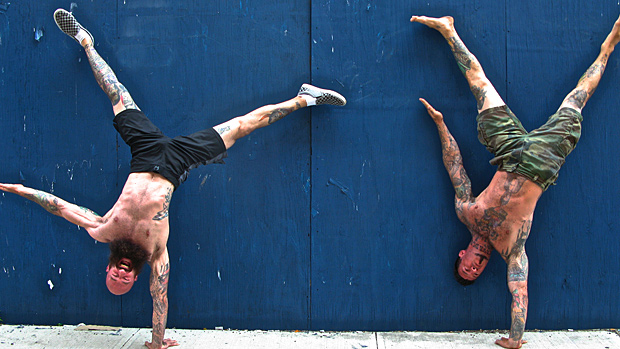 If you’re a calisthenics enthusiast like myself, you can try practicing the One-Arm Push-Up and single-arm wall handstands to keep the pushing power of your left and right sides balanced.

Kick up into a two-arm handstand first, then carefully take one hand away and hold the position for as long as you can. Of course, you’ll want to be sure you’re doing the same work for both sides.

Once you’ve identified your weaker side, you can begin prioritizing it in your workouts. This means training that side first within each session, which will allow you to give it your full energy and attention.

That said, you don’t want to hold your stronger side back from progress, either. The best way to focus on your less strong side without babying your stronger side is to perform the same amount of reps on both sides, but spread them out over more sets on the less-strong side.

For example, if you can do 3 sets of 10 single-leg squats on your stronger leg, you can try doing 6 sets of 5 reps on your weaker side to allow for more recovery without doing less total work. You’ll still be working your two sides evenly in terms of overall training volume, but you won’t have to sacrifice your form to do so.

Though you may never completely even out your two sides, implementing these methods properly will ensure you no longer have a weak side. You’ll have a strong side… and a really strong side!