A killer pair of arms and a hard midsection are without a doubt the most sought after goals for many lifters. Most programs accomplish this by having you train arms and abs separately. While this works, an exercise that provides a massive arm pump while simultaneously challenging your core would allow you to both maximize time and provide a new stimulus that leaves your body with no other option but to grow bigger, stronger, and leaner.

Consider too that a lot of lifters consider arm and ab training to be a waste of time as they're not "functional." However, when an exercise challenges your ability to resist unwanted extension and rotation, it automatically becomes more athletic and functional. Here are four exercises that do just that - challenge your functional core capacity by ripping it apart while allowing you to achieve a massive arm pump. And, if you do them right, they'll also help vacuum that waist down to an aesthetic ideal.

Perform these four exercises as a workout by themselves, or throw one or two in at the end of any training session.

When you extend your arms overhead, you're subjecting your triceps to a massive stretch. It also lengthens the core "lever," which also stretches the core musculature. This setup challenges its anti-extension capacity. In other words, the core muscles fight to keep your midsection stable and it ends up "vacuuming" your core. Just make sure you suck in your stomach as hard as you can during the movement. And just like the core, you place a higher demand on the triceps when you work them from a lengthened position, and that sets you up for bigger gains. Just make sure not to do this movement the day before an intense pressing session as the triceps will be fatigued and possibly sore.

Much like the TRX triceps extension, this exercise will place your core musculature and triceps in a stretch. The angle of pull from the cable forces you to resist extension as well as placing a constant tension on the triceps throughout the entire exercise. Keep in mind that you can place more emphasis on the anti-extension component by moving the cable to a higher starting position. Again, suck in the stomach as hard as you can.

If you put yourself in the common inverted row position (see video), you can manipulate your arm position so that you can do a closed-chain biceps curl, which is guaranteed to provide a massive pump. While some would look at this exercise as an anti-flexion exercise (as gravity works to sag your hips towards the floor), it's actually an anti-extension exercise. You're more likely to super-compensate against gravity and arch your lower back as you pop your hips towards the ceiling, which is what the body wants to do because it makes the exercise easier. However, by focusing on keeping your position neutral, you'll not only work the biceps really well, but also subject the core to some significant anti-extension work.

Any time you go unilateral on an exercise, you're challenging your ability to control rotation via your core musculature. The angle of pull from the cable provides constant tension on the biceps while the bilateral stance with unilateral pull challenges your ability to fight rotation. If, however, you can't use a heavy enough weight to fully challenge your biceps because the weight is twisting you around, work from a split-stance position first.

Getting the Most Out of These Exercises

Targeting and working the arms during these exercises pretty much takes care of itself. Simply control the motion and don't cheat by moving the upper arm during any of the exercises and boom, you'll achieve the bi and tri pump we all love. As for the core, we can take this a step further to achieve maximal results. As John Meadows stated in a recent T Nation article, "If I had to pinpoint the biggest error people make in training abs, I'd say it's their breathing." John goes on to explain that you need to inhale deeply before executing the movement and then blow all your air out.

This forces the abs to contract because as you blow your air out in the contracted position you can no longer rely on the diaphragm for stability and therefore must stabilize via the muscles of the core. John also suggests you try to suck your stomach in as hard as you can and "push your abs against your spine." This extra emphasis further targets the obliques, which are critical for maximal stability as well as a vacuumed waist.

Listen up, Twiggy. Drop the Bruce Lee comic book you're reading and pull up a chair. You're about to get the skinny on gaining muscle.
Bodybuilding, Training
Mike Robertson September 15 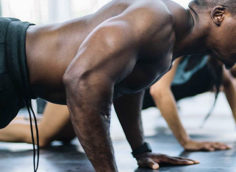 You know you should be doing pull-ups. But what's the best way to attack them? Six of our coaches tell you what works for them.
Most Popular Pull-Up Articles, Powerlifting & Strength, Pull-Up, Training
T Nation December 20

Every deadlift eventually stalls, and the number one reason is technique related. Here's how to find the right fix for your ailing pull.
Deadlift, Powerlifting & Strength, Training
Andrew Sacks July 24