If every workout takes you longer than an hour, you're not training. You're socializing. Sixty minutes in the gym is more than enough time to do hard, yet very effective work.

But what if you've got to cut that in half? Is going to the gym even worth it? Yes, yes it is. Here's how to get it done.

Look man, bro-splits are king. And I do consider things like upper-body/lower-body to be bro-splits. Anything outside of full-body training in a single session is basically a split. And bro-splits rule for anyone past the rookie stages who wants to maximize development.

But if you can only train 30-minutes a pop, it's best to focus on one, or at most, two muscle groups within that workout. How you decide to finagle it is up to you. First think about how many days you can train, then organize your workouts from there. Here are some templates you can work with based on the number of training days a week you have open:

Ok, so on day 3 you're looking at basically three body parts, but you can knock out some brutal work for biceps in 3 minutes. Don't think so? Try 100 reps of empty-bar barbell curls.

Notice there are hamstrings with back work on day 3. This means the legs are still getting some work twice that week. But you can consolidate back and hamstring work to save time as well, and we'll cover that in a bit.

Notice the sequencing of body parts here? We start with legs, probably your toughest day of the week. Plus, day 1 is often on a Monday, which is International Chest Day. You should have the leg machines and squat rack all to yourself.

The other part of the sequencing is that you may be slightly more fatigued as the week rolls on. You'll be knocking out the two biggest areas in the first two days. From there, you just smash chest, shoulders, and arms. If you set your chest day up properly, you can minimize the work that needs to be done on days 4 and 5.

How? Emphasize progressive overload on chest day. Go for both rep PR's and major strength work on some select compound lifts. Then use the shoulder and arm days as metabolic stress days. Just blast out some ultra high-rep work with single-joint movements. This could also serve as a restorative stimulus from the hard and heavy chest pressing, providing some localized recovery.

Because you're short on time, you'll need to compress your warm-up sets and working sets in a way that maximizes them for each workout.

But there's another category of set you need to think about: feeder sets. These are done after your warm-up sets, and they pump some blood into your working muscles. When you do them you'll feel more "in tune" with the movement you're executing.

Feeder sets should be fairly hard, maybe just a couple reps shy of failure. What's the difference between those and working sets? Working sets are the ones that you take to failure, or those where you use intensity methods to further increase the time under tension within the set.

Here's an example of how all that would look:

Here's where effort and time become consolidated. You can either work hard or you can work long, but you really can't do both. At least not consistently. And in the context of this article, you've got 30 minutes.

Here are a couple of set-extending methods that are highly productive for inducing both pain and muscle hypertrophy. (Those often go hand in hand.)

Once you've begun your first working set, take it to failure. Then rest for 20 seconds and go back at it. Once you hit failure, rest 20 seconds again and go back for one more round.

You're basically smashing in three working sets in a short timeframe. If you're keeping track in a logbook, or trying to break rep PR's, then try to get more reps in across the board each week than you did before.

For example, if you did dumbbell bench press with the 100's and got 14 reps, 8 reps, and 5 reps respectively (across the rest/pause sets), then that's a total of 27 reps. The next time you ante up for that movement, beat 27.

There are some movements I don't like with rest/pause, like squats and deadlifts. The low back is going to take a beating. Use straight sets for them. With deadlifts, never hit failure for any reason. There's just no need for it since it's too recovery-intrusive.

One method isn't really "better" than the other. The best one for you will be the one you use with the most intensity on a consistent basis.

Most often, supersets are done using a single-joint exercise combined with a compound/multi-joint movement. With compound supersets you'll be – hold on to your horses – using two compound movements back-to-back.

This isn't unusual when you're pairing antagonist muscle groups, like chest (pushing) and back (pulling). But, believe it or not, there's no rule saying you can't obliterate a muscle using two compound movements back-to-back for it. For example...

If you're using one of the splits above where you're hitting one muscle group for the day, then these same-muscle pairings are awesome. But in the 3-days a week split these will work great for super-setting chest and back, quads and hams, and biceps and triceps as well. For example...

Do a whole slew of exercises in a row with no rest until all movements are completed. I like these more using single-joint movements rather than smashing in a bunch of compound movements. You can create a really bad-ass metabolic stress session for certain muscle groups without impacting your recovery on the bigger lifts.

For example, with squats the low back will take a fairly solid beating while the quads could actually handle more work. When you use pre-exhaustion you level the playing field by starting with leg extensions then immediately moving to a set of squats. Theoretically, the quads are now fatigued and the low back isn't the "weak link" in the kinetic chain.

Other examples would be flyes before bench or incline press, lateral raises before overhead pressing, and pullovers before chins or rows. This is a great method to really smash the living hell out of a body part in short order.

Both are compound movements that basically work the same muscle groups. But the execution of them will dictate which area is going to get a little more work.

By "overlap" I mean you can hit all of these areas multiple times a week if you're one of those guys that freaks out that you're not hitting chest enough during the week. You don't really need to sweat it if you're smashing chest one day with bench press, then triceps a few days later with dips. It really means you're smashing chest, shoulders, and triceps at least twice that week.

I'm giving the busy gym bro a lot to work with here. There's literally a million ways all of this could be cooked up to create some productive training splits. Here are some examples:

Day 3 – Back and Hamstrings

Rather than focus on a particular routine, focus on the principles here and become your own case study. Use this as a loose guide to figure out what fits into your limited training window, and what training strategies you like best.

It could be as simple as just showing up and doing some straight sets to failure with one or two movements. And if you enjoy that and are consistent with it, you'll see progress.

Remember, you don't need permission to try something new. Be your own researcher here. Plan for exercises and intensity techniques for that 30-minute window and then flesh out the things you enjoy. Discard what doesn't work for you. 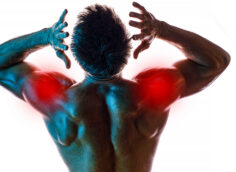 Got cranky delts after years of lifting? These clever shoulder exercises allow you to train without pain so you can keep the gains coming.
Bodybuilding, Exercise Coaching, Shoulders
Gareth Sapstead June 19

Improve performance, reduce risk of injury, and look better with your shirt off. Here's how.
Abs, Training
Mike Robertson March 27