Although the title of this article says "Mountain Dog style," that isn't entirely true. The crux of what you're about to read was inspired by (stolen?) from an American physicist born in 1879 that had this topic all figured out. He was a bright guy, even winning a Nobel Prize in physics. You may recognize the name, Albert Einstein.

Here are the three Einstein quotes that laid the foundation for my theories on bringing up weak bodyparts:

Here's how they apply to fixing your bodybuilding woes.

The definition of insanity is doing the same thing over and over again and expecting different results.

If what you're doing isn't working, ditch it.

Bodybuilders are creatures of habit. Many stick to performing the same exercises week after week, steadfastly refusing to change even long after their beloved exercises have stopped delivering.

For example, bodybuilders often approach me for leg training assistance, yet when I start to outline a leg routine for them, all I hear is, "Well, I don't like x exercise or y exercise, I like to do w and z." Let me wrap my head around this: You're asking me for help because something is off, but refuse to change what you're doing? How does this make sense?

Don't continually repeat something that isn't working. Period. I know this sounds simple, but many bodybuilders find this idea a challenge.

Embracing this pragmatic approach was critical in my quest to improve my weak points. I didn't care what I was doing, if it didn't deliver any progress after six months or so, I'd ditch it.

For example, I had pathetic back musculature for many years when I competed. I did what all the local guys said to do, working my ass off doing deadlifts, chin-ups, and bent over barbell rows. But after doing this for close to a year, my back had made zero improvements. I'm not suggesting these aren't fantastic movements, but for me, they weren't. I realized that to develop an awesome back, I needed to start over. And I eventually developed a very good back, but only after finally figuring out what worked for me. 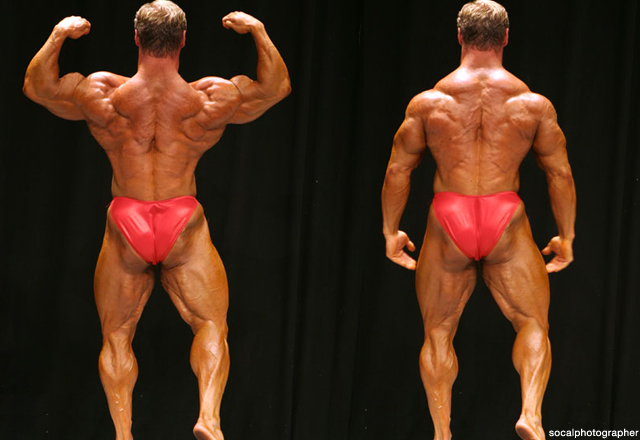 Here's a sample back workout that I found effective:

Everything should be made as simple as possible, but not one bit simpler.

Do less for strong bodyparts, and more for weak ones.

Just like how the body can only digest so much food, there's also a point of diminishing returns with training. Your body can only handle so much. If you're following a hard training protocol and going balls out, you need to sacrifice some sets and volume for a strong body part and apply that energy to a weaker one.

Let me repeat, do not just add volume on top of volume for someone who is already training balls out hard. According to Einstein, that would qualify as "simpler."

I worked with top national level competitor Brad Davis last year and he saw great improvement in his legs, which had been his weakness. Our strategy was to scale down his back training - his back was already world class - from once a week to once every two weeks, and train his legs three times over two weeks. The result was he didn't lose an iota of muscle loss off his back and his legs improved dramatically.

Here's how we attacked it:

Then start back at week one.

Here's a variation that I have Jr. National champion Shelby Starnes doing. His weakness is arms lagging behind his torso.

You can continuously repeat these rotations until you've fixed the problem. Remember these are weak bodyparts for a reason, and they won't change overnight. It will be a fight, but you have to put your mind to it, and grind relentlessly.

I also applied this to my arms this past offseason. My biceps are significantly better than my triceps, so I only trained biceps once every two weeks, and added more sets of triceps on arm day. I also added triceps on chest day, so in my case, it was a blend of what I had Brad and Shelby do. My triceps are significantly better, but they aren't there yet. For me, this will be a fight, too.

Imagination is More Important than Knowledge.

I take great pleasure in finding exercises that are novel and unique. By unique I don't mean some upside down BOSU ball one-arm reverse squat perversion, but basic exercises performed in a new way. Just a small change can be mentally stimulating and kick-start new growth.

Tweaking basic exercises will also help you better feel the muscles you're targeting. You might try five things that leave you shaking your head before stumbling onto a variation that lets you feel the muscle working like never before.

The cool thing is when you learn to feel your muscles working better, you can start looking at your whole program and evaluate what works and what doesn't.

Your mind to muscle connection is extremely important when it comes to improving a weak point. Most lifters just pound the muscle into oblivion, or so they think. Often when I talk to bodybuilders about their weak points, one common theme is that they just can't make that muscle sore anymore.

Remember if you can't feel a weak muscle working during training and you can't get it sore, any changes in volume or frequency are useless.

Unfortunately, many believe that all that's needed is a simple plan with the basic lifts performed over and over. While that may work for the genetically gifted, enormously "enhanced," and novices, it will only take the rest of us so far. Eventually your beloved bench press will stall, you'll get injured, or you'll just quit in frustration.

Here are a couple of my favorite tweaks.

Everybody has a stubborn or weak bodypart - hell, some of us have more weak points than strong points - but never just assume that you're cursed and throw in the towel. My hope after reading this is that you now have some fresh ideas to start chipping away at your own weak bodyparts.

But please, no more talking about it! It's time to follow through! Don't become another internet expert that sits on a forum belittling others and quotes references and studies but never accomplishes anything.

Make a decision that you're going to get bigger legs, or bigger arms, etc., and then start the journey.

This lift can be used as a tool to train for strength and mobility, along with overall health of your muscles and joints.
Exercise Coaching, Shoulders, Tips
Lee Boyce August 18

What happens when you combine a brutally hard hypertrophy system with one of the most successful strength templates ever invented? Check it out and see.
Bodybuilding, Powerlifting & Strength, Training
Jim Wendler April 21 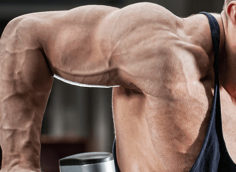 Use this compound set to totally exhaust your muscle fibers and hit the neglected long head of the triceps.
Arms, Bodybuilding, Tips, Training
Lee Boyce November 10