Swing for a Quick Hormone Boost

A 2014 study showed 12 minutes of kettlebell swings significantly increased testosterone and growth hormone immediately and for up to 30 minutes afterward (1):

Now, acute hormonal responses aren't as important as once thought for muscular adaptation (it's more about what your average is throughout the day that matters) but any surge in anabolism and fat-burning potential is a good thing.

If you're looking for some radical results, then try "spiking" your anabolism and fat burning potential with 12 minutes of swings sporadically throughout the day.

If you want to copy the study exactly above, they did 30 seconds of swings with 30 seconds of rest for 12 rounds. The study used a 16kg kettlebell (about 35 pounds) for all participants, but you'll do best picking a weight you're more accustomed to. Feel free to put your kettlebell swings on steroids by adding a band.

If you don't have a kettlebell heavy enough to impose a significant challenge, or if you're looking to add some explosiveness to your workouts, then try adding a band.

Attaching a Band to a Kettlebell

They're a solution for light kettlebells.

Forget the lacrosse-ball sized kettlebells they're swinging down at your local circuit-training class. To truly make kettlebell swings work for you, you'll need enough resistance to make it challenging. Not so much that your form deteriorates, but enough that the weight forces your hips to do some work.

If you don't have a heavy enough kettlebell, the banded version will do the trick.

Their resistance is accommodating.

Just like using accommodating resistance for your deadlifts, kettlebell swings have an ascending strength curve meaning that it gets harder at the end. Accelerating through the increasing band resistance will develop insane explosiveness.

They're better than your cleans, you jerk.

Heavy and banded swings can arguably rival the Olympic lifts for power and rate of force development, and without anywhere near the complexity.

Basic kettlebell swings are also more spine-friendly than more common power exercises, with a compressive spinal load of almost half that of the Olympic lifts (2).

The band accelerates you back down.

Not only does a resistance band force you to accelerate through the rep, it accelerates you back down as well. This overspeed eccentric overloads certain stretch-reflex mechanisms that contribute to your "slow" stretch-shortening cycle and plyometric abilities.

In short, it's another reason to choose banded swings to enhance your power and athleticism.

They enhance the downward phase.

Force plate analysis shows far more force is produced on the downward phase of the swing. Augmenting this with a band accelerating you back down will further add to its effectiveness. You'll develop greater force and activate more high-threshold motor units here, which is never a bad thing.

A 2012 study compared kettlebell swings to treadmill running, and although running achieved a higher level of oxygen consumption and calorie burn, kettlebell swings still managed to get subjects working above 85% of their heart rate (3).

All "moderately trained" men used a 16kg kettlebell and women an 8kg kettlebell. There are a lot of flaws with this, but we won't go there. If you want an impact-friendly form of conditioning, then kettlebell swings are a good alternative to running. Add a band to ramp up the intensity.

One exercise will help with both. The results? A bigger, better squat. Check it out.
It Hurts Fix It, Tips, Training
Jesse Irizarry September 17 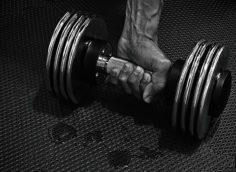 Send us your half-naked pics and we'll evaluate your body. It's not as weird as it sounds.
Bodybuilding, Training
Chris Shugart March 24 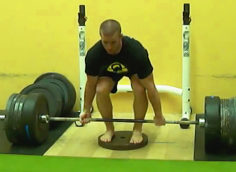 Stand on a plate or study platform, then deadlift. This increases the range of motion, making it one of the toughest lifts out there.
Deadlift, Exercise Coaching, Powerlifting & Strength, Tips
Max Shank June 12