Okay, today was the last straw. As I was finishing-up chest at the gym, I overheard an ad nauseum conversation that needed serious debunking. A seriously overweight (over-fat) dude was standing at the front desk getting "advice" from the gym owner's girlfriend. It went something like this:

Huh? Her redundant focus on the "balanced" part is what disturbs me. Rather than struggle with this any longer, I put it to YOU: What the heck is a balanced diet?! Seriously. If we take the classical definition of "balanced," it means "being of equal weight" or "all sides being equal." Is this what she meant? A 33.3% protein, 33.3% carbohydrate, 33.3% fat diet? Or did she mean the usual sports nutrition recommendation of 10, 70 and 20%? Isn't that balanced for athletes? Or perhaps she was referring to her own diet that's equal parts celery, iceberg lettuce and, (after her daily breakdown) corn chips?

I'll take a wild stab at this and guess that little Miss Advice knows about as much about nutrition as I do about color-coordinating nail polish with spandex tights.

And this ingorance isn't just limited to gym rats. I've heard this obtuse "balanced diet" nonsense from a wide spectrum of people rangeing from family members to physicians to Ph.D.s. It's invaded and confused our most fundamental thinking about food.

The truth is, nutritional balance appears to be different for each of us – at least to some extent. Energy and carbohydrate needs, for example, vary in parallel with activity level. Power athletes just don't need them in the same amount (or at least for the same purpose) as endurance athletes. Similar statements can hold true for protein and fat. So what's a conscientious T-man to do? Well, we do have some choices. Let's review a few different approaches to what constitutes a balanced diet...

Although many of you may disagree, the Food Guide Pyramid isn't a bad place to start. It certainly isn't balanced, though. The whole concept stems from the idea that we need more carbohydrates (6-11 servings of breads and cereals) than anything else; hence the large base of the pyramid.

After that, we we need moderate amounts of fruits and veggies (2-4 and 3-5 servings, respectively), some meat and milk (2-3 of each), and just a bit of sweets and oils, as indicated by their lofty but lonely position at the tiny summit.

I have to guess that the Food Guide was conceived in a fit of self-impressed creativity back in 1992. "Hey, let's take these descending amounts of foods and arrange them in a nifty triangular shape!" Woo hoo! (Sorry for the sarcasm, but imagine how many times I've had to, as a nutrition professor, hear about the Pyramid – almost as many times as I've heard the term "balanced diet"!) If the USDA had been truly focused upon balance, they'd have created a Food Guide Pentagon or Food Guide Hexagon with all sides being equal.

Of course, the Canadians have expressed their distinctiveness, which takes the form of a "Food Guide Rainbow." Other countries have their own versions, too. So much for self-congratulatory American nutritional geometry.

Actually, the Canadians' version is a bit better. Their emphasis on whole grains as the base of their... I mean as the outer band of their Food Guide, is a big deal. Although the U.S. version has enjoyed a recent emphasis on this, historically, breads and cereals weren't adequately differentiated. To the casual observer, the substantial 6-11 servings of breads meant a trip to Pastry Palace and a big ol' refined pasta dinner with garlic bread. Okay, I'm exaggerating a tad but just look around. People like white bread and white pasta. Biscuits, pancakes, "wheat toast" – they're all refined wheat flour. (Here's a tip: If you want actual whole-grain wheat bread, look at the ingredient list; otherwise you're buying refined, processed, and probably dyed "wheat bread." Hey, those manufacturers aren't really lying, it is, after all, made of wheat).

But I digress. The Food Guide Pyramid may not be balanced but isn't evil either. It reminds us that carbs are a big portion of our needs because they provide energy and crucial glycogen. Bodybuilders need to be reminded of this sometimes. One shouldn't ditch the carbs completely.

On the opposite side of the spectrum, rainbow, or pyramid, average Americans meet their breads and cereals recommendation with great vigor – even as they eschew the fruits and veggies part.(1,2) This leads not only to imbalance, but to an imbalance favoring processed, zero-fiber, lipogenic "stuff." I guess we could say that selective implementation of the Pyramid makes the average Joe as bottom heavy as the nutrition guide he grew up with.

Okay, so much for the official federal approach to nutrition. I'll leave this topic with a final thought: the Food Guide Pyramid doesn't work – at least not in practice. It's not so much the Pyramid itself, but its incorporation into daily lifestyles. Despite hearing about it from the time we're kids, only a staggering one percent of us meet all its recommendations on a daily basis (2).

Hmm, nearly equal parts protein, carbs, and fat. Now here's balance. I have to say, this approach may be best for a number of physique-conscious athletes. Particularly the dieting ones. Its larger protein content certainly doesn't sit well with many nutrition professionals, however. I won't address "protein paranoia" here; it's yet another ad nauseum issue. Suffice it to say that bodybuilders need more and 40-30-30 supplies it.

But what about those low-moderate carbs? That could be a problem, even if current bodybuilding dogma agrees with lower-carb intakes. The 40-30-30 approach results in a relative decrement of carbohydrates that may be too low to replenish glycogen stores in higher-volume weight lifters. For example, after nine sets of bodybuilding exercise (leg extensions at 70% one-rep max), glycogen falls a whopping 41-44 mmol/kg wet weight (3) – and with it, so would anabolism.

If you start to get flat and stay that way for a few weeks (low energy-level, no pumps), you'll have to correct it. Minimally, consume 50 grams immediately post-exercise during each day of your regime (however you split-up your individual body part training). Another 50 grams an hour later is also a good idea. After you cycle through training your whole body once (say, one week of workouts), you'll have partially replenished your muscle glycogen reserves and be ready for more "Zone" action.

Alternatively – or additionally – go carb-crazy (oatmeal with fruit, whole-grain toast, flax pancakes, orange juice, etc.) on some weekend morning. Not only are glycogen-replete muscles more anabolic, they're better at burning fat. This is where the old exercise physiologist phrase "fat burns in a carbohydrate flame" comes from. (For those who care, it has to do with anaplerosis and Krebs Cycle intermediates.)

And without careful attention, lower-carb diets become lower-calorie diets. Poor energy intake is a bodybuilder's worst enemy. If one is going to become a disciple and follow recommendations on the Doctor Sears Web site, I'd be particularly cognizant of the fact that they are largely meant to address obesity and fat loss issues. Total caloric intake can be quite low for Zone addicts, so consider both the gross amount of protein, carbs, and fat (grams) as well as their relative proportions (percent of each relative to the whole). As a bodybuilder, you are different than almost everyone else – you'll need more of everything.

Even though energy balance can be corrected via larger fat intake, muscle (and liver) glycogen depletion occur pretty quickly, as we've discussed. So don't think fat and carbs are perfectly interchangeable. We need to maintain glycogen levels and relying on gluconeogenesis (bodily creation of new glucose/ glycogen) to do it is doubtful. This is not to say that an adaptation period toward better fat metabolism doesn't occur over time.

A few weeks spent on a higher-fat/ lower-carb diet certainly helps. Despite a mountain of available data, most health professionals choose to ignore this fact. People do get better at burning fat based upon dietary influences alone. And athletes stand to benefit even more.

Improved fat usage (fatty acid mobilization and oxidation) could positively affect the glycogen depletion scenario. Overall, if you're a Zone devotee, I think you're on the right track regarding macronutrient proportions and a true "balanced' diet.

This diet needs a full article, if not a dissertation, in itself. Let's just say that extremely low-carb diets carry even greater risk of glycogen depletion and muscle catabolism than the 40-30-30 approach. In purposeful disagreement with the Food Guide Pyramid, Atkins folks swing the pendulum far in the opposite direction, encouraging intake of dietary fat. America's obsession with carbs is berated and these necessary nutrients are demonized.

Although I personally (and professionally) have a great interest in manipulating various types of dietary lipids, I recognize the imbalance that's evident here. The Atkins style of near-ketotic dieting is as disproportionate as the entrenched pro-carb doctrine that it's trying to replace. The truth is, neither carbs nor fats should be demonized. That seems to be our problem – we're all seeking a "perfect enemy" when none exists.

For the vast majority of our time on earth, we humans were hunter-gatherers. Meat – with all its protein, nutrients and yes, saturated fat – was a staple. Eating it played a major role in the development of our larger brains. (How else can we ponder macronutrient balance?) Whole grains and seasonal fruits and veggies were also common. Variety wasn't a choice but an imperative. Balance was built-in to the system, even if adequacy was not. We ate what was available or we starved. Starving, emaciated cavemen don't score with hottie cavewomen.

And so natural selection goes. It may be just such an inborn survival "instinct" that drives your mom to insist that you finish your plate. Although this topic is unbelievably cool in explaining much of our modern problems with body fat, it's yet another story. Stay tuned.

How do I personally approach dietary balance? I take it rather literally. Both the 40-30-30 approach and the Paleo-Nutrition approach are similar to my way of thinking. After 14 years of considering this stuff and getting pumped-up about one diet, then another, I've kind of come full circle. The key difference is that now I better understand the "whys" behind macronutrient balance, including the complexities regarding subtypes of each.

This takes time and involves both reading and self-experimentation. Many T-mag readers know that even published research can be used to "prove" almost anything... just put Sears and Atkins in a room and see! Degrees aside, it really helps to actually interpret this stuff as an actual, "practicing" bodybuilder.

I'm not a high-volume-training type of guy; I don't do a ton of total work (force x distance). As such, I don't need tons of carbs. I go for variety in eating, getting different types of protein (a fixed 25% of my intake), different whole grain carb sources (about 40-50% of my intake), and plenty of under-emphasized fats (monounsaturates, omega-3s, etc., about 25-35% of intake). The real focus, however, is on nutrient timing relative to training and even time-of-day. Macronutrient proportions are just the beginning.

So that's my take on the issue. A tip-of-the-iceberg survey of the "balanced diet" and why the term should never cross your aunt Nelly's lips... nor anyone else's unless they're familiar with nutrition science. Whether you're an extremist who prefers focusing upon one energy source or you're an Aristotelian-type who believes "moderation in all things," hopefully you'll be more cognizant of the complexities involved. The ignorant, obtuse over-recommendation to "eat a balanced diet" must no longer corrupt us!

Or maybe this whole article is moot and my gym owner's girlfriend has already considered all this. Yeah, right. 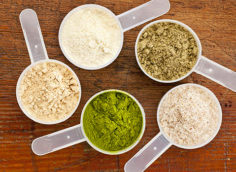 This is potentially the greatest gift a son, daughter, grandson, or granddaughter could ever give to their aging parents or grandparents.
Feeding the Ideal Body, Nutrition & Supplements, Protein, Tips
TC Luoma May 6