Hardgainers. Nutrient micromanagers. Guys “stuck” on a muscle-gain plateau. What do these people have in common?

No. Back up. The problem is this: they only think they’re eating the right amount of calories to trigger muscle gain!

Last year when I was early in my mass phase, exacting calculations were getting me nowhere. The myriad variables of life conspired against me and the excess calories I thought I was providing my muscles weren’t truly excess. No surplus. No new muscle.

Regardless of predicted gains or beliefs, physics (energy-in versus energy-out) stubbornly persisted to hold true. There were only two possibilities:

I was forced to acknowledge something my old college physics professor used to derisively say to some of us physiology guys: “Biology is messy, but physics is perfect.”

To solve my problem, my buddy “Fortress” Fortney and I took what I knew about a phenomenon called dynamic metabolism and came up with a plan for the summer and fall.

By Thanksgiving, I had gone from 200 pounds (at about 15 percent fat) to 216 pounds with a very similar percent body fat. Lifts were clearly much heavier and muscles bigger. For the first time in years, I’d gained a large amount of quality weight in just a few months. That’s what a mass season should be like!

Now, using what I learned, let’s talk about how you can put on 10 to 15 quality pounds and break that plateau!

The Secret Life of Dynamic Metabolism

Chances are, your calorie calculations for mass gain have failed you. Why? Because of dynamic metabolism.

When a bodybuilder calculates his metabolic rate and caloric needs with a formula like the Harris Benedict equation or the Mifflin equation, there are assumptions being made.

First off, the use of simply body weight in those calculations, rather than fat-free mass, is bound to lead to problems. Second, those formulae aren’t made for bodybuilders and hardcore athletes.

But here’s the big one: Those calculations assume stasis. That is, the number that results for resting metabolic rate – which gets up-calculated with activity factors – is presumed constant from week to week. If height, weight, and age are fixed, so is the calorie needs result. That’s incorrect!

Factors like thyroid and leptin changes are simply considered “normal” and “healthy” whereas they actually rise and fall fairly quickly. And there are no accommodations in those equations for other life variables. Activities of daily living change (non-exercise physical activity), training performance ebbs and flows, psychology and moods undulate, work stress waxes and wanes, and sleep patterns vary.

Using the Harris-Benedict formula, a bigger-than-usual, 5’9″, 198 pound, 26 year-old guy needs about 2008 calories just to stay functional. He needs 3214 if we factor in his moderate activity. Now let’s add 400 extra calories of “surplus” so can build one pound of muscle per week. Total: 3613.4 kcal needed for progress.

So, if this lifter eats 3,613 calories every day, he’s guaranteed gains, right? Nope! Not when he subtracts calorie-draining variables from his 400-calorie surplus!

What kind of variables? Well, take off about 200 calories for his hyped metabolism due to recent weight gain (see below), another 200 for muscle soreness, and perhaps another 50 for greater work done in the gym. Now this lifter is struggling to break even on the calorie front, let alone gain mass.

Add to this an appetite that’s probably no larger than before and he needs some help. 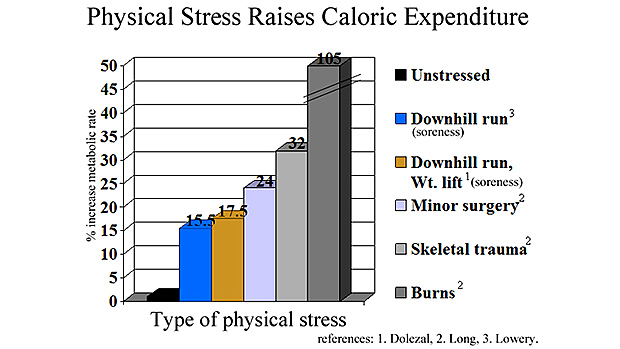 From an endocrine and metabolic standpoint alone, well-done overeating becomes tough. When a lifter starts overfeeding calories in an effort to gain mass, his metabolism will naturally speed up. This has been demonstrated for decades in overfeeding studies.

A good example is a study from Leibel and colleagues (1995), who demonstrated clearly that daily energy expenditure rises significantly, 15-20% above baseline, after a 10% weight gain: “…an unanticipated increase in energy expenditure that countered the gain in body fat.” (McArdle W., 2010)

Metabolic rate actually “uncouples” from body weight or even from fat-free mass. In other words, those carefully-calculated 400 surplus calories our sample guy is getting are really far less. His speedier metabolism has chewed through many of them.

Additionally, a higher-calorie intake encourages less fatigue in the gym, an element of injury resistance and more motivation to train. Workouts become more intense and/or longer. A guy may not notice or may simply be pleased at the bump in strength, viewing it as a positive. Ironically, this extra work further reduces any true energy surplus toward substantial muscular gains.

And don’t overlook this fact: a recently-grown body is larger and thus takes more work (and energy) to carry around all day. It may not be a huge amount, but imagine carrying a backpack around with you containing a ten-pound dumbbell. Walking around town or campus, in the gym, everywhere, the extra calorie expenditure adds up.

Finally, recurring muscle soreness has a calorie cost itself. Did you know muscle soreness on a whole-body level carries an element of hypermetabolism not totally unlike some injuries and even minor surgeries? Big eating can lead to big lifts and thus big soreness. It’s yet another calorie drain that the magic formulas don’t account for.

A mass-seeking lifter has to overcome the energy-sapping variables that life presents in order to guarantee anabolism (muscle growth). Frankly, that takes an element of aggression.

If you’re not eating again when you’re not “ready,” you’re simply not eating enough. We’re not using the term “battle” inadvertently here. This isn’t always fun. It’s not a “dirty bulk” done purely for enjoyment. It’s a goal-oriented, serious endeavor that can be very tough.

There’s a price to pay to become more muscular than those around you. You must get more aggressive. Controlled aggression can pay dividends, though. You just need a plan and the cajones to stick to it for months until the weight is gained.

Step 1: For a while, you’re going to focus on the scale. Your first goal is to “eat on” 10 pounds of scale weight.

Use Chris Shugart’s weighing guidelines for consistent feedback: Weigh first thing in the morning, after a bathroom trip and before eating or drinking anything. Use the same scale every time. Don’t weigh at other times of the day or use different scales.

Now, EAT. Eat until you put ten pounds on the scale using the same weighing guidelines as above. This may take a month. It may take three. Doesn’t matter. Forget fussing with 100 extra calories here and there. Eat.

Always carry portable foods like apples and peanut butter, low-sugar granola bars, dried fruit and mixed nuts, FINiBARs and protein shakes. Drinking plentiful calories is huge. At time, liquids may be 33-50% of calorie intake when appetite fails. Fine, do what you need to do to keep meals big, frequent, and moderately clean. A skipped meal is like a skipped workout. Believe it.

Stop fearing dietary fat and quality carbs, especially around workouts. Remember, these calories are your ticket onward and upward. The scale will be your impartial judge.

Step 2: Reach your new body mass: 10 pounds, or about 5-8% above your baseline body weight. Don’t pussy-foot around. If you’re eating like a man, you should be half-way there in a month.

You can tolerate the 10-pound gain, even if it’s 30-40% fat mass at first. Let’s say it again: the scale is an impartial judge of whether you’re winning the battle of the knife and fork. Do you want to remain stuck at 180 pounds forever, or force your way into a bigger shirt size?

Step 3: Hold your new size for six months to recompose it with heavier and more intense lifting. As a bigger man, you can lift more. If you aren’t lifting hard, you’ll just get fat.

Listen, there’s no proving that your body will perfectly recompose rapidly, but we do know three positive things about overeating and weight change.

A Warning to Fat Boys

There are limits to this aggressive approach. If you’re already over 18% fat or you can’t discern moderately clean overfeeding from junk food bingeing, this approach isn’t for you. Family history of obesity? Not for you either.

This is a no-holds-barred, physics-proven plan to break through a low bodyweight plateau, in an initially reckless fashion, then use that mass to your advantage.

Forced anabolism – planned overeating plus hard lifting – is a very real concept. Toss the calorie calculations and watch the scale. If it’s not moving then you’re not eating enough.