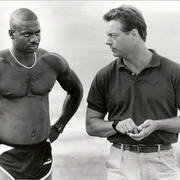 Charlie Francis (1948-2010) was a world-renowned Canadian track athlete and coach. In 1971, he became a Canadian national track champion in the 100 and 200 meters. He made it to the quarterfinals of the 100 meters for Canada at the 1972 Olympics in Munich. Charlie coached many elite athletes, most notable is 100-meter sprinter Ben Johnson. He was very interested in the mechanical model of how people ran, and was one of the most attentive and intense coaches of his time.