Researchers Jar Physiology World With Evidence of Other Hamstring Movements

Associated Press After only ten months of study and 10 million dollars, a team of researchers has begun to suspect that the leg curl is not the only possible hamstring exercise.

"Bewildered and baffled" is how the lead scientist described his sorry ass after evidence of other possible hamstring movements began to surface.

Okay, so maybe I'm being silly. That's what I do. Regardless, you probably get the idea that I think most athletes don't do a very good job of training their hamstrings. Three sets of 8-10 leg curls and they're outta' there. What's more, they often treat the bench as if it were their wives on their honeymoon instead of an exercise machine. In other words, lots of lurching, sweating, grunting, and soft whispers of "I love you" (okay, the last one happens to be a personal affectation, but hey, I like my leg curl bench a lot).

Ultimately, it all comes down to what's important to you as an athlete. I could drone on and on about the aesthetic flair of a pair of well-developed hamstrings, or I could talk about how big a part they play in developing speed, or I could simply tell you that they make your pants fit better. Whatever. If you're interested in building your hams, then you've got to start adding some variety to your workouts. And, as much as it may pain you, you've got to start working them first in your workout. It's a fact of life: muscles worked first respond better than muscles worked last.

I know, I know. I just finished ranting about how all anyone ever does is leg curls, and the first movement I throw at you is a leg curl. Don't get me wrong, I think leg curls work really well in working the biceps femoris, but the hamstrings consist of two other muscles, not just the femoris.

With that in mind, humor me and start with leg curls (after you've warmed up, of course). We're going to do four sets, and we're going to work heavy (given the fast-twitch nature of the hams, there's no point in over-emphasizing high reps). We're also going to try our darndest to eliminate all the lurching that's characteristic of most people's leg curls. Even though I'd like you to take one second to raise the weight, try and imagine that you just had back surgery the preceding week and that the slightest involvement of your lower back would cause you to feel like Mel Gibson at the end of "Braveheart" when they disemboweled him.

We're also going to try something different. When you raise the weight, I'd like your feet to be in the dorsi-flexed position (in other words, flex your foot upwards so that the toes move closer to the knee). Then, as you lower the weight over the course of 8 seconds do it with your feet in the plantar-flexed position (with your toes pointed down, away from your body).

You might have noticed an example of this if you ever sat too close to the steering wheel of your car. When your knees are bent, the gastrocnemius becomes ineffective, and it's consequently more difficult to apply the brakes. (This is the same reason why seated calf raises work the soleus muscles at the expense of the gastrocnemius muscle.)

Conversely, when you bend the knee with the feet in plantar flexion, the overload shifts from the gastrocnemius and goes onto the hamstrings, making it a more effective hamstrings exercise. The cramping you'll no doubt experience comes from the gastrocnemius because it's used to doing leg curls the old way it'll no doubt "struggle" to reactivate the old motor pattern.

Don't worry, though (you wussie), this cramping thing is only temporary.

So, I'm saying to do the concentric contraction with the feet dorsi-flexed and do the eccentric portion of the movement with the feet plantar-flexed. Since you're stronger eccentrically than concentrically, the hamstrings will start getting a greater overload during the eccentric part of the movement (because you'll have inactivated the gastrocnemius by plantar-flexing your foot).

In short, this is a much more effective way to do leg curls.

Do 4-6 reps per set, waiting approximately three minutes in between each set.

Most ham workouts completely neglect the semitendinosis and semimembranosus. Time to change all of that. Recent anatomical research points out what track and field coaches have known for years: hamstrings are connected as a chain to the glutes and back extensors (erector spinae). With that in mind, it stands to reason that your hamstring workouts should involve exercises for both the hip extension function and the knee flexor function. Hence, the good mornings/semi-stiff legged deadlifts superset.

There's nothing inherently tricky about these movements, but hitting the proper groove is often difficult. If you don't concentrate enough, the erector spinae of the lower back will take over. Granted, it'll get involved regardless of how well you do either movement, but you don't want it to be the only muscle group being worked.

To do good mornings, approach a loaded Olympic bar as if you were going to do a conventional squat (feet shoulder-width apart, bar resting on the traps). Now, instead of squatting down, bend forward at the waist as far as you can. Keep the knees slightly bent. If you're like most people, your lower back will want to take over. Don't let it. Do the movement slowly and deliberately. Concentrate on the hamstrings. Try to actually flex your glutes, as this will help focus the stress away from the spinal erectors. Pay special attention to the eccentric, or lowering, part of the motion. Keep your head up and maintain a slight upward arch in your lower back.

Do 6-8 reps using a 302 tempo (that's 3 seconds to lower the weight, no pause, followed by 2 seconds to raise the weight). Without resting, go immediately to semi-stiff legged deadlifts.

Semi-stiff legged deadlifts are fairly similar to conventional deadlifts. You know how you bend your knees and squat down while doing deadlifts? Well, you're going to do the same movement, but your legs will stay in the same position throughout the movement no squatting down. This will force the hamstrings to take over.

To get yourself in the proper position, grab a pair of dumbbells and stand up with your feet about four inches apart. Bend your knees about 15 to 20 degrees and keep them that way throughout the entire movement. Now, bend down at the waist and lower the dumbbells to the floor while looking forward and keeping a slightly bowed arch in your lower back. When the back starts to round out, come back up to the starting position. If there's a mirror in front of you, you should be able to keep yourself in view for the entire movement. Slowly raise your torso back to the starting position.

Do three total supersets, resting 90 seconds in between each superset.

Although this is a quad movement, it has the added benefit of just killing your glutes and hamstrings. To do this movement, you need a slightly elevated platform. Those Reebok step aerobics platforms work best, but you should be able to find something around the gym that's stable and stands about eight inches off the ground.

Once you've found a suitable platform, grab a pair of dumbbells (they probably don't need to be all that heavy) and stand about 28 to 30 inches in front of the platform (the platform should be behind you). Now, place the ball of one foot behind you, on the platform. You're now going to lunge forward, all the while keeping that back foot on the platform. Keep your head and torso erect while letting the dumbbells hang at your sides. Lunge forward until your trailing knee just about touches the floor. Push your body to the starting position with your front leg, using an explosive movement.

Work one leg at a time, doing 8 to 10 reps per leg and using a 301 tempo. Do three sets. Don't rest between legs (if possible), but rest about 90 seconds in between each set.

This movement requires some balance, so you might have trouble doing them the first time. You might also find that they're excruciating, but that's half the fun, isn't it?

For some reason, dumbbell squats are regarded as some sort of wussie movement. You generally see beginners doing them, but that's probably because the 45-pound Olympic bar is too heavy for them. No matter. Personally, I think they're a highly evolved movement that has one distinct advantage over barbell squats.

Think about it, can you really go to total failure on squats? Total failure would be defined by your ass being on the floor with several hundred pounds on your back while you whimpered for somebody to come save you. No, given the nature of the beast, you have to give up while you still have some strength left. It's a preservation thing.

However, with dumbbells, you can squat to total failure. When you can't squat the weight up anymore, you jettison them like some World War II bomber that just dropped its payload on Hiroshima. Furthermore, you can easily go to complete failure, drop your payload, grab a lighter pair of dumbbells, and continue.

Since this article was intended to be primarily a hamstring-training article, I should add that full squats are one of the best hamstring exercises there are not half-squats, but full squats.

You're going to hate me for this exercise, but here goes: I want you to do three sets of 6,6,6. That means do six reps of dumbbell squats, ass to the floor, to jettison-the-weights failure. Then, after ten seconds of luxurious rest, pick up a lighter set of dumbbells and do six more reps. Rest ten seconds and repeat. Use a 201 tempo.

Do three total sets, resting 90 seconds in between sets. Have the gym attendant standing by so he can load you into a laundry hamper and push you out to the curb until a friend agrees to pick you up, take you home, and slide you under the door.


NOTE: Do this workout about once every six days or so.

There are plenty of other hamstring movements (and quad movements that also target the hams), and I'm sure you can come up with a whole slue of them if you set your mind to it. Of course, that's the whole point of this article, to get you thinking about total body development and bucking tradition; tradition, in this case, being the practice of working the quads first and all but ignoring the hamstrings. 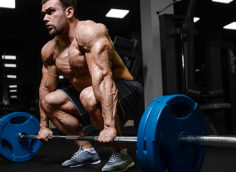 The way most lifters add load to the pull-up leads to poor lifting mechanics and even back pain. Here's the simple fix.
Tips, Training
Kyle Arsenault March 2 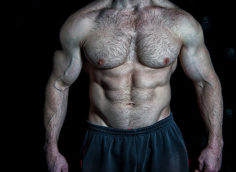 Can't get to the gym because of the weather, a global pandemic, or a zombie uprising? Build muscle anyway with these moves.
Training
Gareth Sapstead July 24

Q & A with one of the world's premier strength coaches.
Bodybuilding, Powerlifting & Strength, Question of Strength, Training
Charles Poliquin January 22