If you want to learn how to fight like a man, there's only one place to go: the world famous Lion's Den dojo. The Lion's Den was started by Ultimate Fighting Champion, pro-wrestler, and "world's most dangerous man" Ken Shamrock. The Lion's Den is home to some of the toughest men alive. No matter what you call it – Pankration, Vale Tudo, reality combat, no-holds-barred fighting, Pancrase hybrid wrestling – this is the place to go to learn the fine art of whup-ass.

The Lion's Den doesn't accept just anyone into its ranks. Those wanting to train with Shamrock first have to try out. During this grueling tryout, hopeful fighters are put through a series of bodyweight-only exercises. (Shamrock keeps plastic buckets handy during the tryouts. One guess what they're used for.) Those left standing at the end are put in the ring with the veterans who take turns testing the mettle of the wannabes, i.e., beating the shit out of them. Usually one guy is chosen to join the pride based on this final test.

It may surprise you that the world's leanest and meanest fighters follow a core workout of bodyweight exercises. Sure, Lion's Den fighters do bench presses, weighted squats, and curls (in fact, the clean and press is a favorite), but the majority of their training revolves around bodyweight exercises Shamrock picked up from his own tryout with the Japanese fighting circuit and his stint in the Marines. After several months of Lion's Den training, fighters are expected to be able to perform the following:

The really advanced warriors can do all these exercises without rest. Ouch. Pass the bucket.

There are several reasons why you may want to incorporate some of these exercises into your current program. First off, this is real-man cardio, not that pussified form of aerobic training you get from treadmills and elliptical riders. You really want to be in there with the rest of the goofballs riding bikes that aren't going anywhere? Instead of the usual stuff, use this type of training as part of your next fat-loss program.

Second, this is the perfect type of training to do if you're stuck in a hotel room or are snowed in and can't make it to the gym. Don't believe us? Try it and see how your legs feel the next day. Lastly, think of this as a test of mental toughness. Can you take the pain? Can you keep going when every fiber in your body is screaming for you to stop? Try it and find out.

Keep in mind, though, that these high-rep bodyweight workouts aren't the best thing for building muscle, if that's your only goal. The intensity is too low and the reps are too high.

The Bodyweight Squat: This is the core of the submission fighter's training. Shamrock says that strong legs are the foundation of fighting and squats are the ultimate test of a man's heart and lungs. While Shamrock never mentions speed of movement in his book Inside the Lion's Den, most tend to use a fairly fast tempo, something like 101. (That's one second to squat down, no pause, and one second to come back up.)

Keep your feet about shoulder width apart, maybe a little wider. Some prefer to keep their hands down at their sides while others prefer to hold their arms out in front of them for balance. Squat down to just below parallel and come back up to near lockout.

The Push-up: You probably don't need much of an explanation here. Go down until your nose or chest brushes the ground and come back up. Again, the tempo is fairly fast, around 101.

The Crunch: Shamrock notes that the abdomen is like the hinge between your upper and lower body. No matter how strong your gate is, if your hinge is weak you won't last long in the octagon. While Shamrock prefers to do these in more of a sit-up fashion with a partner holding his feet, you can do them solo just as easily using crunch form. He has his fighters use a slower tempo here, exhaling every rep. While Shamrock doesn't bother with specific tempo prescriptions, these are probably done to a 201 or 202 tempo.

After ten bodyweight squats you may be laughing about how easy this is. After 50, you may be tempted to take a little breather. After 100, you may need to sit down. Most men never make it to 300. Shamrock says you should shoot for 500 if you're a real warrior. Now, before you get discouraged here, he also says that you should start with sets of 25 or 50, then "build, build, build." We'd say a good goal the first time you try this would be:

If you can, try not to rest between exercises. If you have access to a chin-up bar, you may try to knock out 10 chins as well. The next time, try to add numbers to each exercise. If you can eventually hit 500 squats, 100 push-ups, and 100 crunches, then you are an official bad-ass mutha!

Another option is to forget about counting reps and shoot for time. Get an egg timer or a Timex Ironman watch and simply squat for five minutes; then do push-ups for two minutes; and crunches for another two. Then do the whole circuit again if you're up for it. Being an official bad-ass mutha himself (and perhaps their leader), Shamrock sometimes watches the clock and squats for a full 30 minutes without stopping. We say five or ten minutes would be a good place to start for mere mortals.

The last option is to use a variation of the rest/pause method. For example, set yourself a goal of doing 200 bodyweight squats. Do as many as you can, rest for a few seconds, then do some more. Keep this up until you reach your target number. If it takes six sets, fine. The next time try to do it in five.

That's it. No more excuses when you can't make it to the gym. Now go see what you're made of. 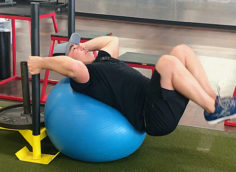 For best results, should you do slow reps or just more reps per set? Check out the new science here.
Bodybuilding, Tips, Training
Shawn Wayland February 26 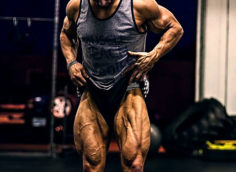 Drop your regular leg-day workout and try this for 8 weeks. If you can take the pain, your quads, hams, and glutes will explode. In a good way.
Bodybuilding, Glutes, Legs, Training
Paul Carter January 11