Weight belts seem to be making a big comeback. Are they must-have accessories for every lifter?

Some lifters are never seen without their beat-up old leather belts, while others go their entire careers without ever putting one on.

An athlete doesn't get anything out of using a belt. 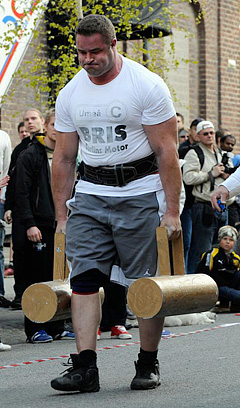 Only those who are trying to compete in a strength sport (Olympic lifters, powerlifters, strongmen, etc.) should be wearing a belt when they lift.

When we assess our clients, they almost universally come in with a weak or underdeveloped core. As such, we have to rebuild this over time with smart coaching and exercise progressions.

If someone is constantly using a belt to "hide" a weak core (relative to their hips/legs), this is a problem we need to address.

An athlete really doesn't get anything out of using a belt. And many times it works against them because the goal is to build a balanced body that works as a functional unit.

For strength athletes, it's a different story – you're judged on your ability to move weight. However, the bulk of the training time should still be done raw, only using a belt when in the 85%+ range of lifting.

To effectively use a belt, there's a lot more to it than simply "pushing your abs out." In fact, this is detrimental as it slams your lower back into extension.

Instead, put the belt on and exhale slightly, allowing the ribs to come down. Now with the ribs down, take another deep breath in – you should feel pressure to the front, sides, and back of the belt.

This is true, circumferential, core stability in all directions. You'll not only be more stable, but move more weight as a result.

Over-reliance on belts weaken the core.

Lifting belts can help performance on big lifts involving the lower back. If a lifter is squatting heavy or pulling big, a belt may be able to increase performance on those lifts.

However, if the exercise really doesn't stress the lower back/core that much – leg presses, triceps pushdowns, etc. – wearing a belt is unnecessary (apart from making your waist look smaller and your shoulders look bigger).

Over-reliance on lifting belts might also weaken the core musculature. Think of a belt like a crutch – use it too much and the muscles don't respond because the belt is there.

That being said, folks like Louie Simmons advocate pushing your abs against the belt, in which case belt work might actually make your core stronger because you have some resistance – the belt – to push against.

But if you're an athlete and you don't wear a belt in your sport, then I would wear a belt sparingly.

So my answer to the belt question is this: First, don't wear it on stuff that doesn't involve the lower back much, and definitely don't be one of those dudes that puts the belt on in the locker room and doesn't take it off until he's changing out of his workout clothes.

Second, save the belt for the big sets, whatever that means to you. For warm-up sets and light work sets it's generally unnecessary to wear one, but for the big stuff put it on.

Finally, you need to learn how to use the belt. I like to do a core bracing exercise in which I put the belt on, get into lifting position, and then brace my core really hard.

Sometimes I'll have lifters put their fingers in between the belt and their core. When they brace they should feel considerable pressure on their fingers. This is harder than it seems, and if it is for you then regress the movement in the following way:

Start in a normal standing position with a slight arch in the lower back and learn how to brace there. Then move into more lifting-specific positions. Hold the brace for about 5 seconds and do a few sets of this.

If you have an injury and you feel the belt protects it, wear it. It's easy to brace the core hard in spinal flexion, but while lifting we want to mimic our lifting position which is usually with a slight spinal extension.

When it comes to types of belts, I'm partial to the Inzer Forever Belt with a Lever. I've had the same belt for 17 years and still love it. 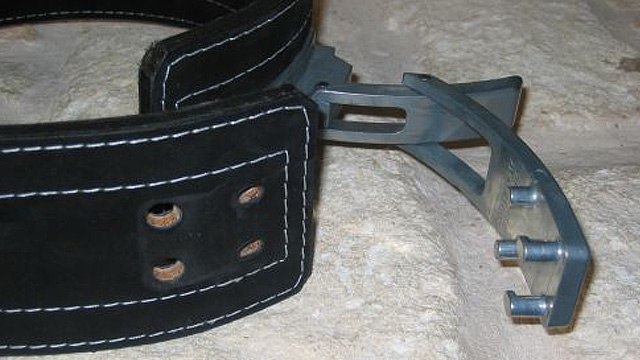 The answer lies in the middle.

About 400 years ago, when I first set foot in the gym, everyone wore a weight belt. It didn't matter if you were squatting, bench pressing, or taking a step aerobics class, a cinched weight belt was as much a part of the gym uniform as leg warmers or Zubaz pants.

Then, about 15 years ago, guys like Paul Chek came out against weight belts saying how they stunted the development of the transverse abdominus and other core musculature. At that point, unless your name was Sven and you were lifting a 400-pound atlas stone at the World's Strongest Man competition, you wouldn't be caught dead in a belt.

As with most things, the right answer lies somewhere in the middle. The majority of people shouldn't be wearing lifting belts the majority of the time.

However, if you're going for a maximal or near-maximal squat or deadlift, and the weight on the bar is hovering around 2x bodyweight, a belt will certainly help you complete the lift by providing more support to your abs and lower back as well as keep your spine from crumbling into a pile of dust.

I've also noticed a lot more Olympic weightlifters wearing thin belts with a Velcro closure during near-max attempts. This is also a good idea as anything that can keep you safer and training longer and harder will be beneficial in the long run. And given the way a lot of these athletes train and the massive loads they're able to lift, these belts are probably necessary.

While you want your lifting belt to be tight, the goal is to be able to get a belly full of air and brace your abs against the belt. So if you're cinching your belt so tight that you can't get in a full, deep breath, you may want to back it off a notch.

You can actually use a weight belt as a proprioceptive tool to help teach an abdominal brace by getting air into your abdomen and bracing against the belt. I usually do this by placing my hands around a client's waist, but if training alone the belt does a great job.

And never wear a belt when performing an exercise that has you sitting or lying down. Ever.

Bottom line, if you're an experienced lifter about to do a near-max effort single or double, then pop on a lifting belt. However, if you're cranking out sets of 8 to 10 at 70%, then put the weight belt back in the closet with your string tank top.

Belts are for experienced lifters and big weights.

It's an easy argument – intra-abdominal pressure that provides spinal stability leads to greater force output. Like any other training tool, however, use is situational.

While belts are a useful tool, they should be saved for the big lifts and Olympic lifts, and for efforts at 75 percent or greater of one-rep max. Sorry, but screaming, parachute pant biceps curls aren't belt worthy.

Sure, it's efficacious to use a belt for lifts at lower percentages – you're going to improve force output. But building core strength and coordination is advantageous for building lasting strength. Consider the lower-percentage lifts to be the core builders, while belts are showtime ergogenic aids.

Belts are also reserved for those with at least a few years of lifting experience – young lifters, and those young in training age, need to learn how to breathe and how to brace with their lats, abs, and supporting core musculature before they slap a belt on.

We actually came out of the womb with a solid belt – lifters need to master using it before they turn to external assistance.

Do you know how to get your air low into your belly? Have you mastered lat tension? Can you breathe behind the shield? If you've answered no to even one of these questions, forget about using a belt.

If you're belt ready, use it well. Align it so the bottom of the belt is just above the crests of your hip bones. Make sure the front of the belt covers your belly button.

Also, make sure the belt is used to reinforce a solid, diaphragmatic breath. Don't just push your abs out against the belt. This means that you shouldn't have the belt so tight that your belly can't expand into it.

Make sure the belt isn't a crutch for shitty positioning. Lock your form in, and then use the belt as assistance for holding good position – long spine and low breath.

Learn proper form, learn how to brace your core, and focus on getting strong with as little "gear" as possible. The fun tools will be waiting for you when you have the need for them.

You'll be surprised at how top strongmen competitors actually train. And if you want to get strong, you'll take a few notes. Check this out.
Tips, Training
Bret Contreras July 20
It seems like you've been adding weight to the stack each time you do triceps pushdowns. The veins in your neck stick out like a garden hose as you power through the sticking point, and the cable starts cutting into your neck, just like your idol, Tom Platz. You stop, however, before it cuts through and leaves a bloody mess on the floor.
Training
Peter Blanchonette July 21

Mike Mahler knows a lot of training bad asses but he thinks they're complete pushovers in their personal life. They avoid risk and couldn't make a tough decision if their lives depended on it. He wants to change that.
Training
T Nation June 2