The Fall of T

There are many potential explanations for the drop in testosterone and subsequent increase in American Idol voters. Skeptics will argue that it's simply our aging population that's to blame for our country's collective low T. Yet that fails to explain the feminine leanings of the younger guys. I believe their shockingly low T scores are due in large part to poor lifestyle choices.

Obesity, stress, prescription meds, staying up late, and poor food choices all affect T to varying degrees, but in a weird way, a low T lifestyle is almost glorified.

The 25 year-old guy with the muffin-top waistline due to the stressful job that keeps him up late is essentially what college prepares most "successful" people for. Follow that lifestyle too long and voila – self-induced castration, a gut you can't seem to lose, and an iPod chocked full of Kenny G.

But here's the kicker: castration has infiltrated and infected the one spot you might think immune to low T levels – the gym.

Castration in the Gym?

What do squats, deadlifts, bench presses, overhead presses, and dips have in common? Answer: They're all compound exercises that can be loaded to produce extreme amounts of testosterone-building tension.

Sadly, a lot of people answer: "They're all dangerous exercises that yogagirl127 posted on Facebook can hurt you and should be outlawed!"

Dangerous? To whom exactly? And what isn't "dangerous?"

Look, I'm not only a trainer, I'm also a physical therapist, and I respect the importance of proper biomechanics and injury prevention, but those basic exercises are not inherently dangerous.

Everything you do in the gym has some potential for injury, as do most things in life. Reading is bad for the eyes, door handles are caked with germs, and pesticides are sprayed on virtually every stitch of produce at the grocery store.

Are you going to stop reading, opening doors, and eating vegetables? Before we outlaw the overhead press, let's crack down on texting-while-driving and we'll really start making the world a safer place.

Safety in my training is paramount, but so is common sense – which isn't always common in the fitness industry. Over the last 20 years, I've watched bizarre trends in fitness information dictate the actual training that occurs inside the gym.

After the rise of the internet, articles written by any "expert" that could type had you in a full sweat-suit to stay warm during your dynamic warm-up and pre-habbed on the foam roller before you rehabbed with your corrective exercises.

In short, as information became more plentiful, more had to be written about the minutia. Once the minutia was deeply covered, the only thing left was to write about what everyone was doing wrong and the risks involved with just about every exercise.

Fact is, most stuff I see talked about today is about what we supposedly can't or shouldn't do. My goal is to remind us all that life is often better when you take the "t" off your can't.

This information overload leads us first on a quest for something safer, then moves us to something either more time consuming or boring, then moves us to skipping that new thing all together due to a lack of time or interest. Ultimately, we're unable to go back to the old exercise that worked and kept us stimulated because we're now convinced that it's bad for us!

Here are a few examples of "castrating" training trends and exercises.

Kettlebells are a great tool, but since the explosion of the kettlebell cults, dumbbells have taken a backseat in training. Funny, but no one ever takes a picture with a dumbbell, yet I see more shots every day of people carrying a kettlebell like it was his or her first-born.

I have nothing against kettlebells and use them in my training. I just wonder if the KB explosion would've ever happened without the internet? Kettlebell shirts, kettlebell necklaces...

Chin-ups are one of the all-time great upper-body exercises (and I include the abdominal area in that too). But they're difficult to perform, which turns people off.

So some genius discovered that a band originally designed for stretching also works great to make chin-ups easier by removing all the testosterone-producing tension. Now you have rooms full of guys doing sissy chin-ups thinking they're Olympic gymnasts.

Dump the bands. Do your chin-ups. And hurry up, because even though they haven't been outlawed yet, I'm sure someone is already working on an article called "Why Chin-Ups Are Bad For You."

Glute-Ham Raise vs. 45-Degree Back Extension

Back extensions are a great exercise, especially when you hold as many plates as you can across your chest.

Too bad some "efficiency expert" discovered that by just having a glute-ham raise bench you didn't need a back extension or a lying leg curl machine because the GHR effectively trains both knee flexion and hip extension. So now, both the back extension and leg curl are falling into exercise obscurity.

Turns out the joke is on them. Glute-ham raises are difficult and about as comfortable as a muay thai kick to the quads, so no one does them. So now, no one does anything, except of course occasionally working the triceps while wiping the dust off the GHR.

I love the Prowler, but this idea that you need a special piece of equipment for conditioning is bunk.

Unfortunately, we've learned to value exercises either by their novelty or their ability to produce soreness or fatigue. I'm not sure there are many sports or activities that you need to prepare for by either passing out or puking in training, but hey, while we're lowering our testosterone levels, might as well find a way to crush our nervous and immune systems, too.

Want a really new exercise that no one is doing? It's called sprinting.

The biomechanics of sprinting is essential to our basic mobility, but it's also very much a "use it or lose it" skill. If you're 27 and haven't sprinted since high school, you need to get out to the field and start doing it. It's slowly leaving you, every day – and that means you're only racing faster toward the big dirt nap. (Maybe they should call being fat and sedentary a "suicide" instead?)

Notice I said "sprinting" not treadmill running, elliptical training, or texting your friend while you ride the recumbent bike. Each one of those pieces has castrated the thing we all need to make progress: impact. Oddly, biomechanists spend a whole lot of time trying to remove impact from our lives.

What's more functional than pushing something heavy overhead? I'm all for the YMCA dance and whatever else we do with ten-pound dumbbells to activate our lower trap, but there's nothing scary about a proper overhead press. It's a fantastic way to challenge significant musculature and load the spine.

Yeah, these can bother you if you have poor mobility, strength, or movement issues, but what wouldn't bother you in that case?

Dips ruin the shoulders, right? That's why I see countless athletes in my facility with fantastic physiques complaining about shoulder problems from performing dips up to one hundred times per week.

Oh wait, that's right... I don't. And by the way, some of these athletes are girls I call "gymnasties" that often out-chin and out-dip the guys.

Pushdowns are great, but strap a 100-pound dumbbell around your waist and see if you can replicate the tension at the cable station.

In the last few years, bending forward at the waist has been under siege. The firefight is all over the internet, and although I've adopted many anti-rotation, anti-flexion, and anti-everything else exercises to stimulate the core, I admit I still throw in some spinal flexion. Somehow I've still produced pretty solid results.

I will agree that a poorly performed sit-up isn't great for your back or neck, but you know what the absolute worst thing is for your back and neck? Sitting slumped over your desk surfing the internet for the latest plank variation.

Sit-ups aren't the biggest problem – it's sit-ting. Let's figure out how to stop people from doing that before we figure out any more things we shouldn't do.

Step-ups and Split Squats vs. Squats and Deadlifts

Step-ups and split squats are great exercises, but for building muscle they aren't in the same league as squats and deadlifts. Tension wise, they don't even come close. But because they're less "scary" than the big lifts, they're making a single-legged run at it.

Here's the irony: because they're unilateral, they also take twice as long to do, so people find them boring. So after a few weeks, nobody does anything. And then they sit in their chair and tell you to watch your back if you dare to deadlift?

Static stretching has been beaten down so hard it's barely breathing. Dynamic flexibility during an active warm-up is a wonderful thing and something I personally use daily, but static stretching definitely has its place in training.

Just about everybody has dropped static stretching in favor of dynamic movement, but here's the thing: dynamic flexibility during a warm-up is time consuming and sometimes complex, so many trainees simply skip it.

Now people are doing no flexibility training at all, and the result is they no longer have the mobility to squat or deadlift properly. So instead of performing some simple static stretches before performing the dynamic movements, we have immobile guys confined to doing planks on an Airex pad in the squat rack.

Stretch out, then warm-up, and then pick up something heavy!

Getting tension back into your workouts doesn't mean you have to kill yourself or get injured. It means scaling things back so that most of the time you spend in the gym is doing stuff that's actually productive.

The 80-20 rule never fails. If 80% of your time is spent straining under good old-fashioned barbells and dumbbells, with 20% spent doing pre-hab, rehab, and "potentiation work" then you'll probably look more fit and have a handful of calluses.

If that split is more like 20-80, then you likely have a problem that includes veggie hotdogs, waxing, and a dream to someday fit into those damn skinny jeans.

Endomorph, ectomorph, mesomorph: Dumb labels from the 1940s that were never meant for lifters. Here's the real story.
Tips, Training
Chris Colucci May 9 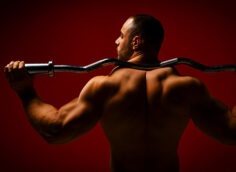 Your body requires a dose of traditional strength training to grow. Here's how to build muscle by building strength.
Andrew Heming May 30

Most powerlifters are better off with a wide stance, but you have to use what's right for your body. Here's your guide.
Tips, Training
Dave Tate January 9

All you need is a light bar and the ability to withstand searing pain. Here's how to do it.
Tips, Training
Paul Carter December 20