For Fat Loss, Do You Exercise First or Diet First?

"Both!" you just answered, right?

Yes, ideally you should start training and improving your diet simultaneously to lose fat. Why? Because...

But as weird as it may sound to T Nation readers, most folks who want to lose fat say things like, "I need to diet and lose weight first, then I'll think about joining a gym."

Maybe they assume every gym is filled with Amazons straight from Paradise Island and chiseled male specimens straight off the latest cover of Men's Health. They're "gymtimidated." But many just think that diet is the most important component of fat loss... and they're not wrong really.

But a new study shows that if a newbie wants to lose fat, training first and worrying about diet later may be the smart way to go.

Researchers gathered up 2,680 sedentary people between the ages of 18 and 35. All were prescribed 30-minute aerobic workouts using stationary bikes, treadmills, or elliptical machines (their choice).

They did these workouts three times a week for 15 weeks. And here's the interesting bit: they were ordered NOT to change their diets.

They changed their damn diets anyway!

Defying instructions, most participants reduced or dropped the fried foods, sodas, and junk foods in favor of lean meats, fruits, and veggies.

In other studies, moderate exercise was shown to decrease preferences for high-calorie, higher-fat foods, probably via changes in dopamine levels. Note that with more intense training, hunger itself may increase, but the preferences for healthier fare could still occur.

Or it could be more simple than that. After seeing their bodies begin to change, maybe they just got hooked on feeling good again. The next logical step is to add a diet component to complement their workouts and keep those good feels coming. Let's hope they added weight training to their cardio plans too.

The researchers also observed that many of the participants previously believed that "their size was inevitable." No surprise really, since there are many health-at-any-size advocates out there preaching that exact message, which is known in scientific circles as "complete and utter monkey shit."

As one researcher pointed out, one healthy habit can promote other healthy habits. In this case, working out first promoted better food choices later.

If you know someone who wants to get in shape and he or she is struggling with making diet changes, push them to get their butts to the gym. According to this study at least, once they're hooked on training the dietary changes will usually come along naturally.

Good abs, along with looking purty, allow you to lift heavier weights and build bigger muscles. Here's how to make that core do more.
Abs, Training
Matthieu Hertilus June 2 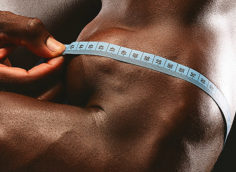