Make no mistake, the bench press is a great movement for building the pressing musculature of the torso. But relying on benching alone, or doing too much benching without any other variations, will often overdevelop the front delts and triceps in relation to the pecs and cause that “hunched over” look you see in a lot of guys with I.L.S. – Imaginary Lat Syndrome.

Anecdotally, if you look at the chest development of great bench pressers, it’s often pretty poor. Yet most bodybuilders have well developed pecs and most of them don’t base the foundation of their chest work around barbell bench pressing.

That’s simply because they bench press differently in order to either press more weight or build muscle, but the majority of lifters don’t know how to change how they do their bench press in order to maximize either quality. 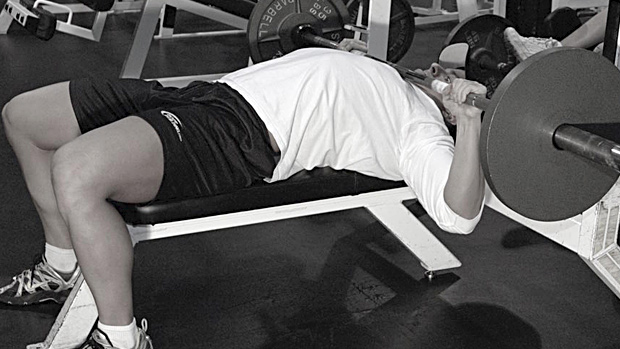 However, people will throw 10,293 studies at you to prove that the variation will cause shoulder cancer and they avoid it. But Vince Gironda used it as a great chest developer and to my knowledge nobody’s shoulders exploded into a bloody mess.

Furthermore, people generally use pretty atrocious form while bench pressing (bouncing, ignoring scapular retraction, etc.) so they pretty much take the pecs out of the movement anyhow.

If you want chest development, you can’t just rely on the barbell bench press. Dumbbell pressing at various angles and flyes performed correctly (palms forward and concentrating more on the stretch and contraction portions of the movement without going overly heavy) are much better options for complete development.

The bench press can be a great weapon in your mass and strength building arsenal, but it’s status as a legendary chest builder has been grossly overstated.