Grinding through deadlifts is a mistake, especially once the bar has already passed the knees. Given the choice, it's always better to lock out the heavy weights just as quickly and explosively as the lighter weights.

During the initial phases of my training career, I figured that slow, grueling pulls were an essential part of heavy deadlifting. It wasn't until I trained at Westside and became certified under Louie Simmons that I realized I couldn't have been more wrong.

At Westside, every day was a training clinic. The lifters made each movement flawless, like artwork, and they continually strived to improve. During a particularly memorable deadlift session, I noticed the other lifters rarely had to grind once the bar passed their knees. Sure, there were some struggles (especially when deadlifting with bands), but most made each consecutive lockout just as fast and explosive as the last.

Since the lockout was my limiting factor, I approached Louie and asked him why my lockout sucked while everyone else's was swift and explosive, even when handling near maximal loads. His answers were simple, straightforward, and extremely effective – in other words, classic Louie. Here are the suggestions he made.

1. Lock Your Knees Out ASAP

This is one of the best cues to make your lockout more explosive. Simply, all you need to do is lock your knees out as soon as the bar passes them.

To help you understand why this cue works, stand up and get into the conventional deadlift stance where the bar is resting slightly above your knees. Once there, while keeping your knees bent, try to squeeze your glutes and finish the lockout.

Not so pretty, is it? In fact, it probably felt ridiculous and awkward. Now try again, only this time, forcefully lock your knees out as quickly as possible. Much easier, right? Probably a lot more explosive, too.

During the deadlift, we aren't capable of forcefully extending the hips while keeping the knees bent. Because of that, you need to lock your knees out as soon as the bar passes them to build an explosive lockout.

To be explosive, you need to train explosively. Many lifters assume their genetics won't allow them to become an explosive lifter.

"Mom and pop were slow, bro and sis are slow... I guess I'm destined to be slow!"

That's a copout and an excuse to convince yourself that hard work is wasted on your "suboptimal genetics." Obviously there are genetic components that dictate our ultimate potential, but most people never come close to achieving their top level of performance.

Explosive power is a skill, plain and simple, and can be improved with specific and targeted training, regardless of who you are or what genetics you've been blessed or cursed with.

Dimel deadlifts are essentially pseudo Romanian deadlifts performed as explosively as possible. I've yet to find a move more specific to the lockout than the Dimel, and it's one of the best drills I've ever used to improve explosive power.

In order to perform the Dimel effectively, follow these 5 steps:

Performed properly, band-resisted deadlifts will radically improve your lockout. Unfortunately, most lifters have no clue how to do them effectively. You need to accelerate the bar as fast as you can! If you aren't attempting to move the weight as quickly and explosively as possible throughout the entire lift, your efforts will be worthless.

The set-up for band-resisted deadlifts is no different than the set-up for standard deadlifts, so don't concern yourself with changing things up. In fact, using the same set-up is a major benefit of using bands.

While variations such as rack pulls certainly have a time and a place, they change the mechanics of the lift and often don't have as much carryover as we'd like. Band-resisted deadlifts, on the other hand, provide the same benefit of increased resistance at lockout while simultaneously utilizing a full range of motion. In short, we get all the benefits of rack pulls without the notable drawbacks.

Jumping is arguably the single most powerful movement, ever. That being the case, it makes sense that improved jump performance can lead to increased explosive power in similar movement patterns.

While some might argue that broad jumps (a horizontal movement) wouldn't be as effective as box jumps (a vertical movement) because they're less specific to the deadlift, I disagree. My reasoning is that most people don't know how to jump!

A majority of lifters tend to exhibit abysmal jumping mechanics and rarely – if ever – achieve full hip extension during the concentric phase of the movement. This especially holds true during vertical jumping variations such as box and squat jumps.

Conversely, I've found most trainees naturally – and forcefully – fully extend their hips during the broad jump. Because of this natural and forceful hip extension pattern, incorporating a variety of broad jump variations into your training is another valid tool in your quest to building an explosive lockout.

If we're going to build an explosive lockout, then we need to train the specific muscle groups designed to extend the hips. Going back to high school anatomy, we know the glutes, hamstrings, and adductor magnus are the key players in hip extension. As such, it only makes sense to strengthen those muscle groups through a variety of lockout-specific drills. Some of my favorites include: 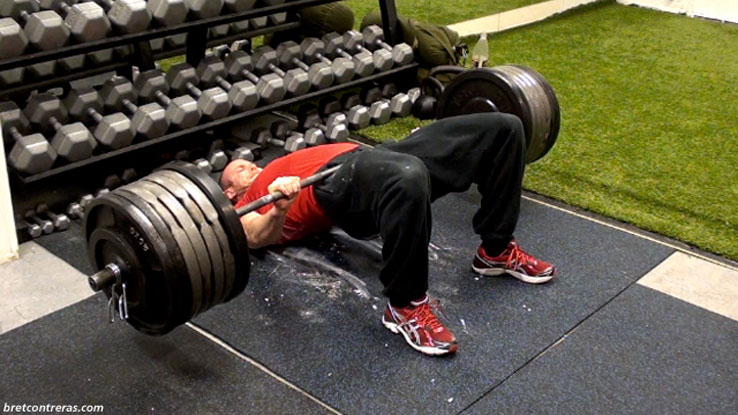 Each of these drills can be trained through a variety of volumes and intensities. However, regardless of the set and repetition scheme being used, make sure to lock out every single rep as quickly and explosively as possible!

What that means in practical terms is that the faster you lift the bar off of the floor, the less work you'll need to do during the lockout. Get the bar off the ground as fast as humanly possible and then ease your way through the lockout. It's a neat little trick to have up your sleeve that will drastically enhance your deadlift performance.

Take, for example, my recent 485-pound deadlift at a bodyweight of 132-pounds:

Notice how quickly I got the bar off the ground? Had I lifted it slowly off the floor I would've taxed myself to the point where I wouldn't have been able to finish the lift.

However, since I initiated the lift explosively, I was able to power through the lockout without too much struggle.

Typically, I like to perform 6-10 sets of 1-3 repetitions between 60-80% of 1-repetition maximum (1RM). Do this once a week (with another session devoted to Max Effort work) and your lockout will be more explosive than you ever thought possible.

Want to get really crazy? Do speed pulls versus bands. You can thank (hate) me later.

Explosive power is a skill that very few lifters understand how to develop. Understanding this concept – that explosive lifting is skillset – provides us with a huge advantage over those who believe success in strength training is purely based on what mom and pop gave us.

If something is solely a genetic gift, we can't do anything about it. We can only do what our genetics allow and nothing more. On the other hand, a skill has the opportunity to be improved. It is, in large part, under our control. We have the choice to decide whether we aim to improve it.

The choice is yours.

This is a double duty exercise. First it strengthens your core. Then, when your core is stronger, it's a great unilateral chest exercise.
Arms, Chest, Exercise Coaching, Tips
Bret Contreras October 16

Grab some weight and hit the stairs for an intense metcon workout. Here are 5 ways to do it.
Exercise Coaching, Fat Loss Training, Metabolic Conditioning, Tips
Rob King April 18