The cause of exercise-associated muscle cramps (EAMC) is a hot research topic. EAMC can occur in all populations, but it's common with endurance athletes who have to perform repetitive movements for extended periods of time.

Where exactly did the idea of dehydration-related muscle cramping originate? The best evidence we have to support that theory is both outdated and lacking in any scientific credibility.

Over a century ago, miners were observed to experience cramps while sweating. When sweat samples were taken, researchers found high levels of sodium chloride. So, the conclusion was made that the cause of these cramps was due to excessive sweating and subsequent loss of electrolytes.

What Does the Current Research Say?

To date, the research overwhelmingly contradicts the hypothesis that dehydration is responsible for muscle cramps. In fact, Jansen et. al. noted in his systematic review of cramping aetiology (composed of 52 pieces of literature), "Modern neurophysiological research leaves little doubt that true muscle cramping is caused by explosive hyperactivity of motor nerves."

Braulick et. al. also found similar results in their research. They concluded that hypohydration with moderate electrolyte losses does not alter cramp susceptibility when other factors like fatigue and exercise intensity are controlled. A lack of proper neuromuscular control is likely the cause.

Braulick tested the cramping threshold frequency of the dominant limb flexor hallucis brevis in 10 euhydrated (meaning "normally hydrated") men. The subjects were asked to use their non-dominant limbs on a cycle ergometer every 15 minutes at a reasonable intensity until they lost about 5% of their body mass in sweat, or until they experienced muscular fatigue. They then retested the participants after hypohydration.

The researchers were unable to identify any statistically significant differences in the threshold frequency while the subjects were in a severely hypohydrated state.

Martin Schwellnus has contributed to much of the literature in this arena. Schwellnus found that the evidence of electrolyte depletion or dehydration contributing to cramping doesn't seem to be sound or scientifically feasible. Rather, "altered neuromuscular control" is the current hypothesis.

He notes that serum electrolyte concentrations didn't seem to make a difference in the occurrence of cramping across multiple studies performed on triathletes and marathon runners. Recovery, he mentioned, was also not associated with the regularization of electrolytes in the bloodstream, meaning that it's unlikely that sodium chloride levels have anything to do with their discomfort.

Schwellnus also formulated some hypotheses as to how athletes may avoid cramping during performance. The marathon runners he tested exhibited more cramping symptoms when they maintained a faster pace–they were nearly 13 minutes ahead of the non-cramping athletes.

Finally, Schwellnus suggests that pre-race stretching could've contributed to this neurological fatigue: 92.9% of the crampers admitted to stretching, whereas only 54.6 of the non-stretchers reported stretching.

At the moment, these findings still need more testing, but they're certainly thought provoking. Perhaps athletes can mitigate some of these symptoms by revaluating their training and recovery protocols.

As strength and conditioning coach Andrew Buskard notes, if the myosin heads aren't able to properly uncouple from actin, or appropriately transport calcium to the sarcoplasmic reticulum, then prolonged contraction can occur. Similarly, ongoing depolarization of the cellular membrane may result in signals telling the muscle cells to contract repetitively.

Another theory is that the Golgi tendon organ receives minimal feedback from the brain, thus the motor neurons become over-stimulated. These are some of the current hypotheses of the biological mechanisms that contribute to EAMC.

So How Do You Get Rid of Cramping?

Now that we know that dehydration is unlikely the cause of painful cramps, how do we get rid of them? Recently, some companies have developed products that are designed to minimize neural excitation. Beverages on the market with ingredients like ginger, cinnamon and capsaicin can counteract the negative performance effects of cramps. You can drink a cocktail like this before the onset of cramps, or once you feel them coming on, to mitigate the discomfort.

The idea behind this mixture is that it activates the TRP (transient receptor potential) channels in your mouth. TRP channels are responsible for mediating sensations such as heat, cold, and pain. Stimulating these pathways will effectively "distract" the sensation of cramping by activating those channels in the mouth and stomach. The capsaicin and cinnamon provide sensations of heat.

While previous speculation suggested that hydration could be the cause of EAMC, it's now clear that cramping is largely the result of neurological fatigue from repeated muscular contractions. Ultimately, it's not your lack of fluid intake causing these twinges, but rather fatigue of the muscles and hyperexcitation of neurons.

Try out a ginger, cinnamon and capsaicin mixture to reduce neural excitation and use a properly periodized training program that gradually increases volume and intensity.

After testing 45 different back and biceps exercises with EMG, here are the ones that came out on top.
Arms, Back, Bodybuilding, Training
Bret Contreras March 15 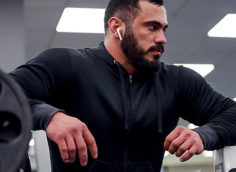 Music can increase performance... or kill it. Music can also boost recovery... or impede it. Here's what you need to know.
Training
Tom Sheppard January 20

You’ve probably never tried this training method. If your goal is size, you definitely should. Check it out.
Bodybuilding, Training
Christian Thibaudeau August 8