Go Lie Out in the Sun

If most of the boil-lancing dermatologists had their way, you'd be wearing a hazmat suit every time you ventured out into the sunlight to keep you from getting skin cancer. You'd sound like Darth Vader as you breathed in and out of your mask and scare the bejesus out of the neighbor's kids.

Vitamin D deficiency is a big problem. It's extremely common, and it can cause or exacerbate diseases like multiple sclerosis, cancer, and heart disease. Furthermore, Vitamin D plays a big part in the health of the immune system. Low Vitamin D can also play a role in depression. On the flip side, boosting your Vitamin D levels if they're low has been shown to increase athletic performance.

As such, most Americans get it from taking Vitamin D supplements or Vitamin D fortified dairy products. Your body can manufacture its own, provided it gets enough sun exposure, but as you know the dermatologists have made that practice rank right up there, health-wise, with chain-smoking unfiltered cigarettes while wearing a bag over your head.

Yes, chronic sun exposure, i.e., tanning, can lead to various skin cancers, most of which are relatively easy to cure. Sunburns, however, can lead to melanoma, which is linked to 10,000 deaths in the US each year.

People who get short-term, occasional sun exposure (without burning) don't have much to worry about. Besides, there's some debate as to the strength of the link between sunlight and melanoma, as plenty of people get melanoma on parts of the body that aren't typically exposed to the sun, like the butt.

Are you using any of these overhyped fitness gadgets? If so, should you be? Probably not.
Metabolic Conditioning, Metcon, Opinion
Dr John Rusin May 19
If you've tried Ian King's "Limping" series for legs, then I don't need to tell you how effective his 12-week programs are. If you haven't tried the aforementioned program, then all I can say is, what the hell is your problem?
Training
Ian King February 11 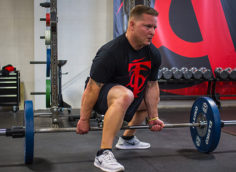 Stretching and mobility aren't the same thing. Here’s what you really need to know to move better and feel better.
It Hurts Fix It, Mobility, Training
Dean Somerset December 28