If you never read a word about weight training and just walked into a gym blind and started lifting, you’d eventually figure out that you could press more weight overhead when you were sitting as opposed to standing.

You’d also figure out that you could lift more weight overhead if you used a barbell rather than a dumbbell, and that your performance would go up even further if you were both seated and using a barbell.

What you wouldn’t figure out, though, unless you were some sort of Einstein in Chucks, is that lifting heavier weight overhead was a cruel ruse perpetrated by Mother Nature’s gymrat nephew.

Even though the seated position allows you to lift more weight, even though using a barbell allows you to use more total weight, you’re activating far fewer muscle fibers than you would if you did a standing shoulder press with dumbbells.

At least that’s the conclusion of two Norwegian scientists, who also discovered, in a separate study, another great reason to stand while working shoulders – superb core development. 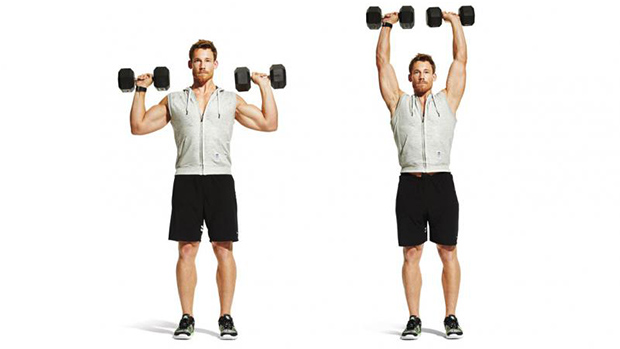 Fifteen young strength athletes were recruited to do shoulder presses with dumbbells and barbells, in both the standing and seated positions. The weight they used represented 80% of their 1RM (the most weight they could do for one rep).

However, when they did standing presses with dumbbells – the scenario where they had to use the least weight – muscle activation in the rear, medial, and anterior deltoids was the highest.

The act of having to stabilize the body showed that standing dumbbell presses were more “inefficient,” but clearly more effective in activating muscle.

The muscles in the lower back don’t seem to care if you’re sitting or standing while doing overhead presses. However, it matters a great deal to both the rectus abdominis (your six pack) and the obliques. Doing standing overhead presses with dumbbells where both arms work together activates the rectus abdominis muscles, while doing them standing and working one arm at a time makes the obliques work harder.

Clearly, overhead presses are best done while standing. It’s more difficult and you’ll have to use less weight than you would if you did them seated with a barbell, but you’ll have greater shoulder activation and get bigger and stronger faster.

Additionally, doing shoulder presses while standing allows you to work both the shoulder muscles and your six-pack muscles simultaneously.