Instead of using a dumbbell for triceps kickbacks, use a low cable.

The dumbbell kickback isn't bad, but using a low cable is better because of the "length-tension relationship" or strength curve.

But using the dumbbell gives you no loading demand on the triceps at the bottom of the exercise when your elbow is bent at 90-degrees, which is where you're strongest. Same thing at the top of the range of motion, when your elbow is straight and your triceps are contracted, which is where you're weaker – the weight is at its heaviest because the lever-arm is at its longest.

This is why so many people cheat at the top by using momentum or dipping their arm or torso farther forward. So when doing dumbbell kickbacks, you're getting weaker as the weight is getting heavier.

Doing kickbacks using a low cable does two things: The cable gives you more tension through the range of motion, and it involves a resistance curve that matches the strength curve better.

Start the exercise with the cable at roughly a 45-degree angle to the floor. This will load the bottom position of the exercise and create the longest lever-arm in the mid-range part of the motion. It'll also create a short lever-arm at the top of the action. In short, you'll build more muscle and strength. 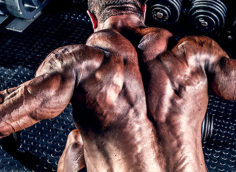 Most lifters do bent-over flyes to hit their rear delts. Here's what they should be doing instead.
Bodybuilding, Shoulders, Tips, Training
Tom MacCormick August 31

Yes, everyone should deadlift, but one variation should be avoided.
Tips, Training
Joel Seedman, PhD December 13