The hamstrings bend and stabilize the knee, among other things. They also play a major role in reducing and controlling force and the deceleration of a movement. They're predominantly fast twitch, and thus respond very positively to eccentric-based training (negatives). In fact, a lack of eccentric strength in the hams is the main culprit for hamstring injuries, not just the strength imbalance between them and the quads.

When doing leg curls, don't allow your hips to come up off the bench. It negates a complete shortening of the hamstrings. To distribute the greatest amount of tension directly onto the hamstrings, you must have hip extension into the leg curl pad so that the hams can reach a fully contracted state in the top position. So push your hips as hard as possible into the pad to make sure this is happening.

An easy way to increase the eccentric loading is to do the concentric or lifting part of the rep with both legs, then the lowering part with one leg. After you hit failure with the single-leg eccentrics, continue the set by using both legs and a controlled negative.

Alternate legs on each rep. Make sure to do the eccentric portion in a controlled fashion to take advantage of the overloading effect. Don't just let your leg freefall when lowering the weight. Do 4 sets of 8 reps. 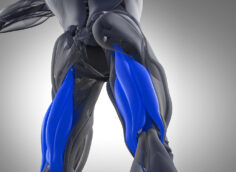 The best hamstring exercise isn't the lying leg curl. For size and strength, you need this one too. Here's how to set it up and scale it.
Exercise Coaching, Powerlifting & Strength
Jason Brown February 5

It's one of the greatest bodybuilding stories ever told. And people have been talking about it for over 40 years. But is it true? Here's the real story, written by a man who actually knows.
Bodybuilding, Training
Ellington Darden, PhD June 13

Have your legs ever been compared to those of an ostrich? Keep reading and you'll gain the tools to cure your affliction.
Bodybuilding, Training
Erick Minor August 25