I don’t know if there’s a serious weightlifter alive that hasn’t watched an action movie of some kind and pictured themselves, however briefly, in the role of the hero. Sure, chaos ensues and you immediately spring into action and pummel the snot out of the evildoers.

I’ve had that fantasy lots of times, but then a sad realization always hits. There’s no way I could “spring” into action, whether that involved fighting bad guys or performing some Herculean feat to save some doe-eyed girl in a tank top, without first doing a serious warm-up and some stretching. My muscles just wouldn’t work very well.

By the time I was fired up and ready to go, the Capitol building would be in ashes and the doe-eyed girl would have been ferried off to Istanbul in a shipping crate.

I hate that unpleasant truth. Moreover, I hate stretching in general. In fact, I’m pretty sure everybody hates stretching, particularly static stretching, except maybe those pliable Jean-Claude Van Damme types that will use any excuse to showcase a split across a couple of coffee tables, like when avoiding a rampaging Roomba.

But then new research started coming out. One study (Ebadi and Cetin, 2018) found that doing 15 seconds of static stretching (but not 30 or 45) of the working muscle increased isokinetic strength. Fine, I guess I can deal with 15 seconds of discomfort.

Leave it to occasional T Nation contributor Brad Schoenfeld, PhD, and a bunch of Brazilian scientists to perform just such a study and question our time-honored biases. They found that if you stretch your hamstrings for 40 seconds before squatting, not only does it fail to impede squat performance, it immediately increases the size of the hamstrings.

I Predict Pain, at Least a Level 7

As mentioned, this was a study involving Brad Schoenfeld so rest assured it was well designed. I won’t get into all the particulars, but it involved 14 men, all of whom had several years of experience in squatting. Each had their 10RM squat tested, each did sufficient warm-ups, and each was tested multiple times.

Half of the men, though, performed a 40-second static stretch just before squatting. While the study didn’t offer any pictures of the actual stretch, what they describe is clearly a traditional hamstring stretch where you sit on the floor or a bench with the knees straight and the hips flexed and reach forward until you “report a perception of pain higher than 7” (with 10 being the max). 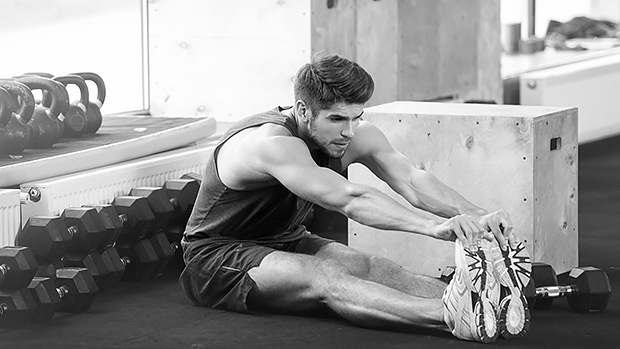 (Bear in mind, though, that the study employed research assistants to bear down on the subjects’ shoulder blades so they could really get into a full, semi-painful stretch, but you can easily duplicate such a stretch by using a towel or rope, hooked around a rack or post, to get you into the ouch zone.)

Then, within 10 seconds after finishing the stretch, the subjects performed their 10RM barbell squat, after which they took 70 seconds of passive rest before repeating the protocol three more times. Here’s an easier way to digest what they did:

So What Exactly Did They Find?

Each group, the stretch group and the no-stretch group, performed the same volume of work. Each group experienced the same significant increase in muscle thickness of the rectus femoris (the predominant muscle in the front of the legs), but only the group that stretched exhibited a significant increase in the size of the biceps femoris (the predominant hamstring muscle).

In short, stretching before squatting increased hamstring thickness without messing up squat performance and possibly improving it.

And What Do We Make of This?

Those of you who are careful readers might be asking how this stretching/lifting protocol resulted in an IMMEDIATE increase in muscle thickness. Therein lies the rub: The increase in thickness was acute, meaning that it might not be permanent.

The increase in size might have been because of increased blood flow as a consequence of the short-term blood flow restriction and “consequent metabolite accumulation,” which is pretty much the textbook definition of a pump.

Additionally, research by Wackerhage et al. (2019) suggests that “an association exists between the acute muscle pump and integrin activation; a membrane protein that can trigger muscle protein synthesis and thus enhance hypertrophic adaptations.”

So sure, the increase in muscle thickness was more pump than solid muscle, but the pump is an invitation to increased muscle growth, and it’s a pretty good reason to put aside our distaste for static stretching and give this method a go.

What remains to be studied, though, is if the method would translate to other antagonist/agonist muscle pairings. If that turns out to be true, then we might all finally accept stretching as more than a rehab/pre-hab protocol; something that’s just as conducive to muscle growth as lifting itself.