Do you just want great looking abs? Or do you want abs that aid you in your sport or lifting performance?

I'm here to tell you that you can have BOTH!

Introducing the Fab-Abs 5000, a revolutionary new core training device developed by top exercise scientists designed to give you jaw-dropping abs that are both SEXY and put the "Fun" back in FUNCTIONAL!

Everybody wants a strong, aesthetically pleasing midsection. The infomercial vultures know this, which is why they go to such great lengths trying to sell you gadgets to supposedly help you achieve this universal goal.

But you don't need to pick up the phone or make three easy payments of any amount. You just need to be willing to listen.

Here's the simplest definition of the core. Think of it as a box, with the following sides comprising said box:

Does this mean that's all there is to it? Not exactly. We can easily make arguments that muscles like the gluteals and lats play an integral role in stability, but let's stick with my basic description for now.

This definition of the core gives you a firm understanding that there's a lot more to the core than just your rectus abdominus, or six-pack muscles.

Similarly, there's more to generating stability than just lying on your back and performing draw-ins all day.

Before we get into the exercises that I use and prescribe, let's cover two core-training myths that just won't seem to die.

1. You ONLY need squats, deadlifts, overhead presses and the like to build your core.

This argument has raged on for years. Some coaches and trainers will tell you that all you need to do is include manly multi-joint movements like squats, deadlifts, and overhead presses into your workouts and – voila – your core is up to snuff.

Not so fast, tough guy.

In a nicely balanced system, each component of the core is doing its requisite amount of work. Think about it like this:

But how often do you typically see this?

I don't know about you, but for me, it's not very often.

Check out the picture. This is a client who came to IFAST about six months ago. He wasn't doing any squats or deadlifts (or any bilateral moves, for that matter) because every bilateral lift caused him lower back pain.

Any idea why? He wasn't load sharing well!

Instead of each portion of his core taking its requisite amount of the stress, his lower back was taking an inordinate amount of the load. This would be the equivalent of his abs and lateral stabilizers working at 50% capacity, forcing his lower back to take on not only it's own share of the work, but pick up the slack for the other muscles as well.

No wonder he had back pain!

This is a crucial example of why complimentary or supplementary core work is important. If your core is balanced front-to-back and side-to-side, of course, squat and deadlift away! Just make sure you maintain that balance over time.

But if it's not balanced, you need some accessory core work to refine your stabilization patterns and get those weak areas of your core up-to-snuff.

2. Sit-ups and crunches aren't that injurious.

I would've hoped by now that we've all thrown crunches and sit-ups by the wayside. I honestly think there are some coaches/trainers that simply enjoy being contrarian and going against the grain.

I also think some people who write a lot on the Internet flat-out don't train enough people to have perspective on what's safe and effective, and what's not.

You may not like Stuart McGill, but the guy has done his homework on the spine. If you want to get your lower back healthy, there are safer and more effective ways to train the core than performing sit-ups until you enjoy the unique pleasure of a herniated disc.

The new argument is that crunches "aren't that bad." From a low back perspective, I might be able to agree – a properly executed crunch primarily moves at the thoracic spine, not the lumbar spine.

Yet think about the body-wide effects of crunching – a crunch trains the rectus abdominus by pulling the rib cage down.

When we pull the rib cage down, we increase the thoracic kyphosis. This sets off a cascade of events – we increase the kyphosis, thus losing t-spine extension. This consistently puts our scapulae in a poor position, not to mention putting our gleno-humeral joint at an increased risk for impingement as well.

So now our "not so bad exercise" has compromised our ability to safely overhead press, back squat, or basically do any exercise where we have a barbell on our back or overhead.

If I left it at that, I'd have basically told you what sucks and not to do it. Let's get to the fun stuff, what you CAN do, and how to get the most out of it.

When the rubber hits the road, I feel like the following exercises are not only more effective for training the core, but more enjoyable (and less mind-numbing) as well.

I'm currently breaking all my core training down into four categories:

Let me briefly explain each.

This exercise category consists of any exercise where you're actively resisting extension at the lumbar spine. Examples include:

These exercises are awesome for developing stability at the core, lumbar spine, and pelvis. If you're executing them appropriately, they'll really tax your external obliques, along with your rectus abdominus to some extent.

Often people will report that these exercises feel easy, but usually they just aren't doing them correctly. To get the most out of these movements, focus on the following:

Side note: Don't think that if you suck at these at the start that there's no hope for you down the road. I can still get better at these myself. Years of crunching variations early on have made me very rectus dominant, so I have to work hard to keep my chest up/out, as well as my neck in neutral position.

This exercise category consists of any exercises where you're actively resisting lateral flexion (side-bending) at the lumbar spine. Examples include:

Anti-lateral flexion exercises are a fantastic option for developing your lateral core, specifically your quadratus lumborum, and the internal and external obliques.

On these exercises, focus on the following:

This exercise category consists of any exercises where you're actively resisting rotation at the lumbar spine. Examples include:

The most challenging components of these exercises are actively keeping everything tight and not allowing any rotation at the lumbar spine.

Remember what we discussed above – do you have the ability to rotate at the lumbar spine? Sure. Do we need to train for it? Probably not.

On the Pallof press exercises, focus on keeping the core and glutes tight, and maintaining a tall posture throughout – don't "crunch" over to stabilize.

On the tornado ball exercises, keep your core/lumbar spine tight and stable, and focus the rotation around the hips and thoracic spine.

This exercise category consists of any exercises where you're actively bracing your core/lumbar spine while bringing your knees to your chest. Examples include:

As you can imagine, these are probably the most challenging subset of core exercises. The focus here should be on keeping your lumbar spine in a neutral alignment throughout, with no lumbar flexion or "tucking."

Proper cueing here is critical; focus on the following:

You can see even in the videos above that I'm working really hard to stay neutral. It's not going to be perfect early on, but really focus on staying as stable and neutral as possible.

Now that you have the exercise types, let's plug this into your current training program.

If you're training four days per week, the setup is simple – perform one exercise subset with each workout. Something like this would suffice:

If you're on a three day per week split, I would do something like this:

Over time, as you improve on the anti-extension exercises, consider swapping those out and moving up to the hip flexion with neutral spine exercises, which tend to be more challenging.

If you're training two times per week, I'd stick to the anti-extension exercises and anti-rotation exercises, as you'll cover most of your bases with these progressions.

Ever wonder how the guys giving all the complicated advice actually train themselves? Well, this is how I'm currently breaking down my own core training, and as you can see it's hardly complicated. But effective, yes – and pretty darn challenging as well!

Unfortunately, this is more of a template than a flashy new gadget to add to your growing collection of impulse fitness infomercial purchases. But I'd argue it's also a heck of a lot more effective.

I'm looking forward to your feedback – no purchase required!

At last, the definitive answer to the age-old question of whether direct arm work is really necessary for big guns.
Arms, Training
Christian Thibaudeau December 30 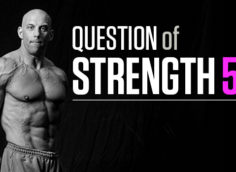